I was favorably impressed on my visit to Bangkok last year so decided to go back and see some more of the country.  This time it's via a cheapo fare on Northwest and with Intrepid, an Australian-based small group adventure tour company.

The gateway is Detroit, a place I have not yet seen.  I still haven't seen much (except white) 'cause they are having a blizzard. Most domestic flights are canceled.  I do something odd about the airport: this could be Seattle; all whites and asians.   Maybe the urbanites use a different airport.

Northwest (which I've never flown before) is a bastion of union seniority rules and and apparent haven of the fat acceptance movement; they may have reached the crossover point where the average stewardess weighs more than the average passenger.  Also, even though about half the passengers are Japanese, none of this bilingual flight staff stuff; instead, Northwest has to hire interpreters to assist the flight crew.

Due to severe conditions, the plane can not stay within take-off weight and still carry  enough fuel to make it nonstop to Tokyo, so we will have to stop in Anchorage.  Before departure we undergo de-icing, an arctic first for me.  Also, I get my first look at Alaska.  Very scenic.  They tell us that the fueling stop will cause everyone to miss their connections in Tokyo but that we will be accommodated.  However, the Northwest bean-counters must  figure that it is cheaper to burn more fuel than to pay for hotel rooms for everybody so we fly extra fast to make up the lost time.  The connecting flight to Bangkok (also Northwest) is chockablock full but waiting.  We arrive at midnight in Bangkok where it is a steamy 90°.

The meeting point hotel is in Banglapoo district right off Khao San Road, the epicenter of the backpacker universe.  Travel agencies, money exchangers, massage parlors, flop houses, bars, street kitchens, knock off ("copy-copy") stores are all in a jumble.  Across the street from our hotel is a Lubavitcher Chabad House, but I manage to resist its siren call.  I note that the Thai video pirates waste no time: playing in the bars is the latest Leonardo DiCaprio release, "The Beach," which had opened in the US just days ago.

Sunday, I have a free day, so I visit some of the lesser attractions that I didn't make it to last time including Wat Arun, the dawn temple. 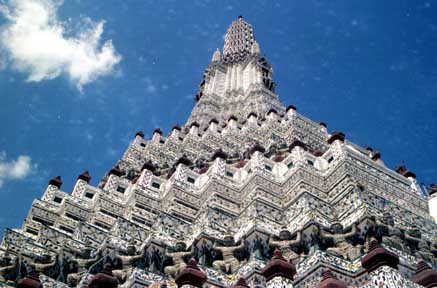 On Monday, the group meets up.  We are nine: 2 other Americans, 2 Swiss, 1 English, 1 Japanese, and 2 Australians plus an Australian tour leader.  We visit Wat Po, where the world largest reclining Buddha is still reclining.  Our guide had been a Buddhist Monk for eighteen years but became de-monkified when he left Buddhist U. and enrolled at Assumption University.  Something about girls in the class and contamination.  That night we take the overnight train from Bangkok to Changmai.  It's a sleeper train, Japanese cars, air conditioning (sort of), quite comfortable. 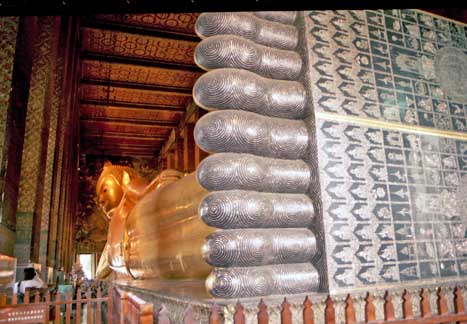 Changmai has many of the attractions of Bangkok, but on a more tolerable scale.  There are plenty of temples and stuff to buy, but it is considerably less congested.  Although it is the second largest city in Thailand, it has a population of 200,000 compared to 9,000,000 for Bangkok. 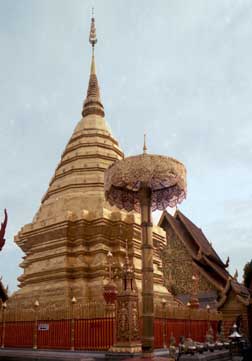 Wednesday morning we begin our trek among the hill tribes.  We ride in the back of a pickup truck (the universal means of Thai transport) for two hours to the jump-off point.  On the trek I avail myself of the opportunity to assist the impoverished populace through employment creation and hire a personal porter  for $4/day.  When Kipling spoke of "the white man's burden," he was NOT referring to luggage.

Although the trip is graded "challenging," it is really pretty easy.  No  more than four or five hours of walking a day, slow, with frequent rests.  On the first evening we arrive at a Karen village.  This tribe has migrated from Burma, where most remain.  This is the tribe whose separatist guerillas fought the British and now are fighting the Burmese government.  (They saved Patricia Arquette in "Beyond Rangoon.")  They are also the tribe that has the 12-year old Htoo twins leading "God's Army."

We bunk down at the headman's hut.  This guy has got all the good jobs sewn up.  In addition to being the headman (a hereditary position) he is also the shaman (another hereditary position) as well as the hotelier, caterer, and entertainment director.  Our guide has attempted to teach us a couple of Karen words, but this tonal stuff is tricky.  For instance "tabloo" with an upward lilt on the second syllable means "thank you," whereas pronounced flat it means "you're crazy."  There is not a whole lot happening so we turn in early.  Just as well, since the damn roosters under the hut (the huts are on stilts) start crowing at 4:30 am.  We are up in the hills, and it gets cold at night!  Silver lining dept: it is cold enough that we needn't heed the malaria prevention posters that decorate the hut. 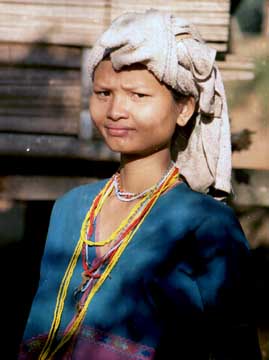 The next morning we resume our trek.  BC, our guide, is an expert in identifying the various scat piles along the trail.  In his words, "I may not know much, but I know my shit."

At lunch, we reach the elephant camp for the next leg of our transport.  There are about 3,000 elephants in Thailand, 2,000 of them in captivity.  They used to work in the logging industry, but most logging has been banned and elephant unemployment is a serious problem.  Now, there is not much for them to do except entertain tourists.  Unlike most of the tourist elephant rides, which are akin to a pony ride around a ring next to the tour bus, this is the real thing.  We sway over hill and dale and cross rivers (actually the same river several times in different places) for over an hour.  It's like being on a roller coaster with bench seats and no seat belts or grab bar.  The experience is enhanced because our mahouts are very competitive and enjoy elephant racing. 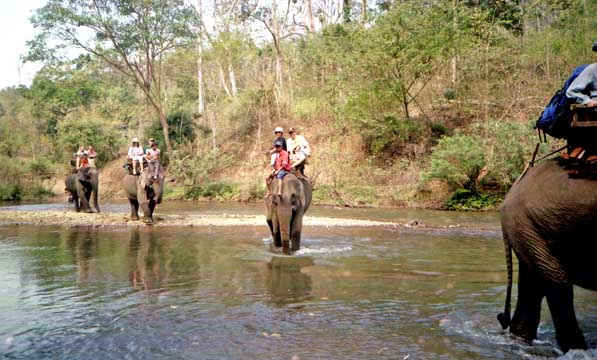 The second night is at a jungle camp next on the river.  It is apart from the nearby village and very scenic.  But not all that quiet since it has its own resident roosters.

I wake up feeling terrible.  I don't know what it is.  And today is the toughest hike, mostly uphill out of the river valley and back to elevation.  I barely drag myself along, figuring that if it gets too bad they can transport me on a litter ala Burton and Speke.  We stop briefly in a Lisu village.  Yeah, the various hill tribes have different languages, but to the untrained and ailing eye, it all looks the same.

Finally, we make it to our stop for the night, an Akha village.  They are easy to identify because the women have distinctive ceremonial headdresses.  I spend most of the afternoon and evening sleeping so I don't't see much (not that there is a whole lot to see).  The women and kids come and put on a little native dance show; but my weakened condition provides an excuse on the participatory numbers.  This is the noisiest place of all: the village has plenty of loose poultry, and the "men's club" meets under our hut.  We have the satisfaction of learning that the most noisome of the group will be "invited to dinner" by the villagers. 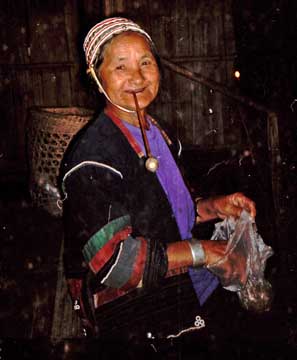 Day four is the last day of the hike.  I am mostly cured, even though in my delirium I have lost my ultra-cool Burmese Army walking stick.  We hike out to a Thai village where a truck brings us back to Changmai.

Sunday night it's the sleeper train back to Bangkok where we catch the bus for Kanachaburi, site of the Bridge on the River Kwai.

Forget about what you saw in the movie.  The infamous "death railway" from Thailand to Burma was built by POW labor, but the bridge was not the tough part.  It is close to the starting point and crosses the Kwai at a level, easy spot.  A temporary wooden bridge was quickly erected and soon after replaced by a steel one.  It was bombed by the Americans in 1945, repaired after the war, and later upgraded to the undistinctive structure that exists today.  Because it is an easy day trip from Bangkok, there are fleets of tourist buses.  Since seeing the bridge takes all of three seconds, they spend the rest of the day at the myriad souvenir shops at its foot.

In the afternoon we go to Erewan Falls, a series of travel poster perfect, impossibly blue waterfalls in the jungle.  They are delightfully cool and perfect for swimming.  My only beef is that it takes an hour to hike up to the seventh fall, leaving us only a few minutes there before having to start back. 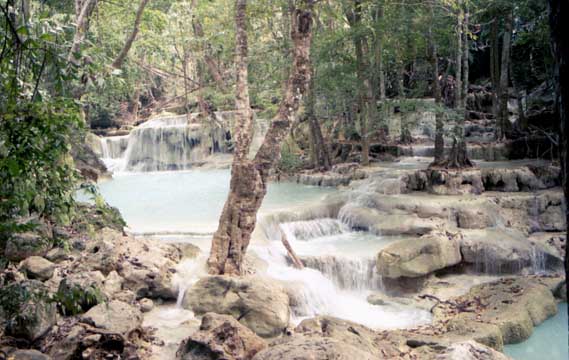 The next day, Tuesday, we start out by taking the railway over the bridge to what is now the end of the line.  Much of the railway was constructed by POWs through ravines, gorges, and seemingly impassable terrain.  One wooden trestle remains from the war.  (The segment over the border was dismantled after the war and parts of the route flooded by a dam.)  We visit Hellfire Pass, so named because observers commented that the sight of the starving men in loincloths cutting through the rock with hand tools by torchlight looked like a scene from hell.  Just walking a short way along the roadbed in the heat is enough for us.  The Australians have built a small but impressive (and air conditioned!) museum nearby. 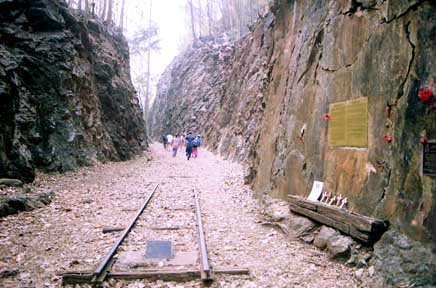 This is the second "adventure" phase of the trip, the centerpiece of which is a two day kayak trip down the Kwai Noi.  The river is fast but smooth, uncrowded and very scenic.  Even though in a kayak you are sitting right at the water line, no one has any mishaps.  We cover something over twenty miles the first day and stop at a raft house for the night.  The passing river traffic consist mostly of bargeloads of tourists being towed up and down the river.  Since we are enjoying a "real" adventure, we are appropriately smug and derisive.  Our raft is moored on the shore of a national park so in the morning we go hiking, swimming, and caving.  The second day's journey is all too short.  We reach the pullout point and pile in a truck back to Kanachaburi (it's Friday). 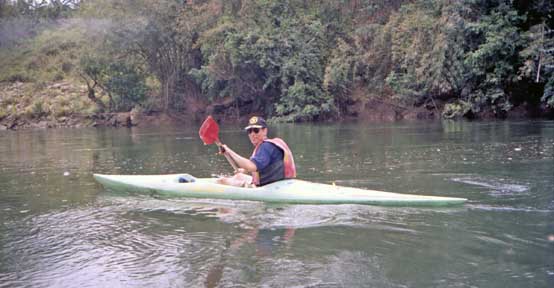 On Saturday, it's back to Bangkok.  As it the last day of the trip, we assemble that night for a farewell dinner, which takes place at something called "The Whole Earth Restaurant."  Apparently, their "all life is sacred" philosophy extends to bacteria.  I wake up at 4 am, stricken.

Even though the tour was over, I still have an extra day.  The Japanese girl and I go up to Ayatthaya, where we rent bicycles and ride around for the day.  (She speaks little English, but has an amazing little Casio pocket translator that translates Japanese into English, French, Spanish, Italian, German, Portuguese, Chinese, and Korean.)  Ayatthaya was the capital until 1767 when it was sacked by the Burmese, after which  the capital was moved to Bangkok.  The site has large, impressive ruins and, of course, plenty of temples.  The place must hold a special resonance for the Japanese becasue there are zillions of them there on bus tours.  We eschew the bus tours and travel by train, which cost 40¢ plus another 75¢ for bike rental. 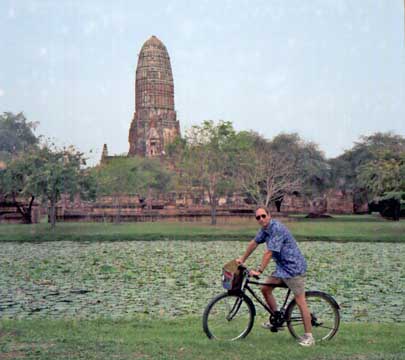 My departing flight is at 6 am.  The drive to/from the airport can take hours during the day, but if you care to leave at 4 am it's only 20 minutes.  I make it back to the USA without incident, then spend the week playing host for the beasties who have hitched a ride in my gut.