This is a mileage builder I scheduled last month: Singapore, via Detroit and Tokyo.

The journey begins with a series of almosts. The Detroit to Tokyo leg is oversold. They start out by asking for a business class passenger to take an earlier flight. After two tries, no takers. I then offer my cattle-class seat. They would have taken me but for that I had checked luggage. (They wanted a no-luggage pax.) They then called for a Taipei-bound passenger to volunteer for biz class. I volunteer to be bumped from the oversold flight; they put me on the list but prefer someone with Tokyo termination. Turns out that due to misconnects they didn't need anyone.

Arrival in Singapore is at 1 AM local time. I learned some lessons last visit: there is no public transport at this hour and taxis charge 150% of the meter. This time I have a reservation at the always-full transit hotel inside the terminal. The charge for a standard 6 hour stay is very reasonable.

At 7 AM I get up, shower, check out, and proceed to immigration (no lines) and to the baggage office, where my bag is produced in minutes, no hassle. Transport into the city on the MRT (light rail) only costs a dollar.

I've already seen Singapore, the southernmost of the Straits Settlements, so I go straight to the bus station and buy a ticket for Malacca. A comfortable express bus, four and a half hours, $6.

At the border I take note of goods prohibited from importation into Malaysia: piranhas, cocoa pods, cloth imprinted with verses of the Koran, and all goods from Haiti. I double check to make sure I left all these things home.

As the tourist board says, Malacca is where it all began. The Portuguese arrived in 1500, then the Dutch, then the English, then the Japs, the English again, and finally as part of independent Malaysia. The city exists due to its strategic location on the Straits of Malacca. It is the route to the spice islands and where the two monsoons meet, enabling sailing vessels to travel both east and west.
The bus station is within walking distance of the center, but I have luggage and this is not a suffering trip. I get hosed for a taxi -- almost $3 to get to the hotel. I am staying in a very nice place, a converted 130 year old mansion on "Millionaire's Row"in Chinatown in the heart of town. They advertise "boutique elegance since 1876," but the interior is completely modern. Such a deal at $29, including breakfast. The collapsing dollar not a problem in Malaysia because its currency, the Ringgit, is pegged to the greenback (3.8 = $1). The hotel is also well located: right across the street from the Moral Uplifting Association.

The city is conveniently compact and very tourist oriented. Smack in the center is a hill on which stood the Portuguese fort. The English pulled it down in 1809, leaving only the gate. Still standing are the Dutch Stadthuys, the Dutch church, a clocktower, and a number of colonial buildings. There is a reconstruction of the original Sultan's palace, a reconstructed Portuguese galleon, and, of course, a windmill. For the past 500 years the port has been visited by Chinese, Indian, Arab, and European traders. Much wealth went into many handsome buildings which are in a good state of preservation.

On my walking tour my first stop is the Museum of Enduring Beauty, which is devoted to bodily alteration around the world in quest for beauty -- lots of lip plates, footbinding, and giraffe necks. It's basically an educational freak show.

Malacca features lots of shopping, particular antique stores. I am trying to cut down on buying junk and limit myself to one mask. I eschew all of the regular tourist crap, although I do like the T-shirt on which is printed the warning on the Malaysian entry card: "Death to Drug Traffickers under Malaysian Law" with the addendum "P.S. Welcome to Malaysia."

I do want to buy some bargain-priced eyeglasses, so I head for the shopping mall. While waiting for the optician to make them I pop into the cinema and enjoy Intolerable Cruelty, the latest bit of froth from the Coen Bros. Now here is the true subject for the Museum of Enduring Beauty: scientists are wasting their time on genetic manipulation of food crops -- what they should be doing is perfecting the human species by figuring out how to implant George Clooney and Catherine Zeta-Jones genes into everybody.

There is a nightly sound and light show on the hill. I waver in my resolve never to endure another one, but I am spared by my tardiness. The first night I awake from my jetlag nap (11 hr time difference) too late, and the second night I arrive after the starting time and the ticket office is closed.

A day and a half is plenty so, in the morning I head out. Hosed for another 10 Ringgit to the bus station. It's only 8 Ringgit for the two hour ride to Kuala Lumpur. Malaysia is an easy country to travel in. Nearly everyone speaks English, there are plenty of signs in English, and even when not it's easy enough to figure words like teksi, ekpres, and tiket kaunter. You just need to remember that water is air.

Futuristic skyscrapers are visible as we approach the city. KL is very vehicle oriented, with not much consideration for pedestrians. It offers all sorts of shiny, modern clean, efficient, cheap, multimodal mass transit, except to get from the bus station to the train station. I get nailed for another 10 Ringgit for a taxi. After storing my luggage and collecting my rail ticket, I have half a day to do the city.
First stop is the Petronas Towers, which were the tallest buildings in the world until clipsed by Taipei and Shanghai, but still pretty impressive. It's free to ride to the skybridge, but the timed tickets are for 2 hours hence, and not even the prospect of upscale shopping can keep me that long. At their base is a 6 level shopping mall. I am standing in front of Cartier, Chanel is next door, and Gucci is across the way . 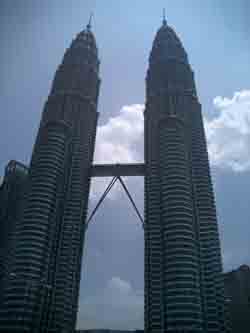 The twin tenets of Malaysian culture are Islam and shopping. This has got to be the only Muslim country that works; that's because the Chinese control about 90% of the economy. The Malays are content to wield the political power, build nice-looking mosques, and enjoy the prosperity.

Back to the center where I admire some very handsome colonial buildings. The British took Malacca from the Dutch during the Napoleonic Wars, then moved their HQ to Penang, and ultimately to KL, which was founded from nothing in the mid-nineteenth century. Trade became less important and KL was closer to the rubber plantations and tin mines.

Although there are plenty of folks out shopping, I am about the only one at the Orchid Garden (free).

I pick up a newspaper. What bad timing! I am leaving KL just as Mariah Carey is due to arrive here on her world tour (next stops: Dubai and Beirut). They are totally starstruck here -- from all the publicity you would think the Beatles were coming.

I am taking the sleeper train to Penang. My profligate ways have led me to shell out $16 for a first class compartment. Just us old fogies here; the backpackers are in the dormitory berths or the chair cars. One problem: while the air conditioning is nice in the evening, they don't turn it down at night, and I wake up half-frozen.

Arrival is in the early morning at Butterworth (a good name for an Asian city) where the ferry to Georgetown awaits. I am pleased that my hotel lets me check in at 6:30 AM. It's a deal at $18, but at a cost: no satellite TV.

Georgetown is synonymous with Penang, the island on which it is located and the northernmost of the Straits Settlements. There is an unmistakable British footprint, from Fort Cornwallis protecting the port to streets with names like Buckingham, Carnarvon, Victoria, and Kimberly. With population of almost a million, it is the second city of Malaysia. (Chinese dominated of course.) 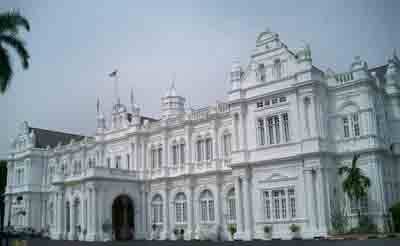 Penang was supposed to have been "The Pearl of the Orient," but Georgetown strikes me as a grungier (but far cheaper) version of Singapore. Lots of old building in varying states of preservation and decay. Part of the charm is supposed to be wandering its narrow, congested streets, but there are not many sidewalks and the few that exist are used for motorbike parking and goods storage. The city is big and spread-out. Also, it's hot.

After a day I figure I have seen most everything worthwhile. On day two I locate a tailor and order up shirts made from the cloth I bought in Africa. While he works I take a tour around the island. About as expected: coastline, jungle, and villages. Lots of beachfront hotels but less than world-class beaches. Also, lots of high-tech factories.

It's Friday evening. I've been in Asia since Monday. Time to go. The best part of the trip is my return to Singapore in Raffles Class on Singapore Airlines. Another rest in the transit hotel, then back to cattle class for the return to Jacksonville.
Enough of this back of the plane stuff. The Big Trip is in two weeks.