The world may be coming to Jacksonville for the big game, but it's not like they are giving out tickets to local lawyers or sending the cheerleaders to visit them in their offices. I am getting outtahere for superbowl hell week. Plenty of cheap air tickets for people traveling inthe OTHER direction.

Departure is on Thursday the week prior. After a transfer in Amsterdam, we are in Rome by 9 AM Friday. Then, to Naples by train (2hours). We are booked on the overnight ferry to Palermo, but there istime for an afternoon's sightseeing. From Napoli Centrali we transfer to the Circumvesuviana (suburban rail) line. On the platform a poster announces the new Maradona Museum (some sort of athlete, I gather), but despite the lure of seeing a used soccer jersey, I stick to the plan.

I want to see Pompeii. (A one-day rail strike prevented my intended visit a dozen or so years ago.) The two major tourist complaints are that it's hot and it's crowded. Well, today it's neither. There is snow on the ground (a rarity for Naples), and the site is blissfully uncrowded. Actually, it's TOO uncrowded. There are alot of houses and sites, but most are locked. A few more visitors would make it easier to spot the ones that are open.

Pompeiiis a big place (a whole city) and we only have a few hours. That's OK,after a while you get the idea. Very impressive, although I expectedmore of a "dug out" look -- walking around, it's hard to imagine it buried under volcanic ash. We are right at the base of Vesuvius, as is all of Naples.

In late afternoon it starts to rain hard, ending the visit.Back to Naples. A quick walk around, then to the port. We take a cab.The driver turns on the meter without prompting. When we reach the port, he demands more than double the metered fare. I refuse. Huge fight ensues. I prevail, conceding only to the authorized luggage surcharge. Bad will all around.

The ferry is fine -- a big ship for cars and trucks with three decks of cabins. It's mostly trucks and their drivers. I think we arethe only ones without a vehicle.

Arrival at Palermo is early Saturday morning. It's cloudy, but the rain has stopped. We check into an upscale hotel that offers a 50% discount on weekends. (Otherwise, I am much too miserly.)

Palermo is definitely worth a day. Although the city is not overloaded with charm, it has many nice buildings.


The highlight is the 13th century Norman palace, now the seat of the Sicilian legislature, and its mosaics.


Sicilyhas been settled and conquered many times -- by Greeks, Romans,Byzantines, Arabs, Normans, Swabians, et al -- and has many layers.There are classical ruins, Moorish remnants and medieval castles. One can see Byzantine mosaics juxtaposed with Baroque frescoes.


Sicilyis also a museum of fascist-era architecture and monuments. Mussolinibuilt a lot and, unlike elsewhere in Italy, it hasn't been replaced.

On Sunday morning I pick up the rental car, a Fiat Panda. At 16 euros/day, it is the bargain of the trip. 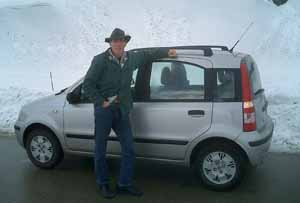 Ina word, Sicilian drivers are crazy. There is no concept of courtesy.Everyone is ultra-aggressive and using the horn constantly.Tailingating is de rigueur. If you permit six inches to open up between you and the car ahead, someone will cut in. It gives "mind the gap" awhole new meaning. Good thing I have the relatively quiet Sunday morning to practice and to negotiate my way out of the city.The roads are good, in some places impressive. The problem is signage,or, more specifically, the lack thereof. The frequency in inverse to the distance: directional signs to far away destinations are posted every few yards; as you get closer and need to start making turns thesigns are scarce or none. Over the week I have to backtrack many times. 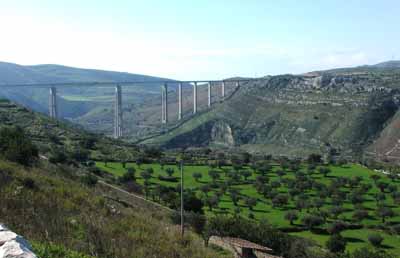 The first destination is Agrigento, on the south side of the island. Wedrive from palm trees through the snows of the mountainous center backdown to palm trees. Very scenic, but no place to stop for photos. We pass the turnoff to the village of Corleone. The guidebook says it hasa cathedral, but there is no mention of Don Vito or Family related matters. (The wine at dinner last night was labeled Villa Corleone.)

Agrigento is a motorists' nightmare. Sicilian towns are builton hills, with steep streets and multiple levels. The streets are about twelve feet wide with cars parked bumper to bumper on both sides. They are mostly one-way in the wrong direction. Agrigento has about six approaches, but it takes many tries to find my way in. And, of course, there's nowhere to park.

The reason we are here is to see the Valley of the Temples -- the best-preserved Greek Temples anywhere. They do not disappoint.

Sicily is a poor but expensive place. This means that there are not a lot ofhotels and restaurants. The locals can't afford them, and the foreign tourists mostly travel in groups. And on Sunday, everything is closed. So, here's a travel tip for Sicily on Sundays in winter: bring food.

And here's another tip: bring a sleeping bag. In places with short winters and no visitors during them, they don't do heat well.Buildings have central heating systems, but they are not very effective. The hotels are COLD. The big Almond Blossom Festival beginsin Agrigento in ten days. I predict that the trees will still be bare. 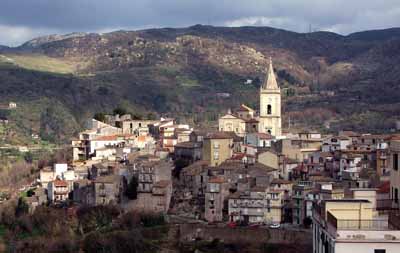 Monday we drive to the town of Piazza Amerino, outside of which is the Villa Casale, site of the finest Roman mosaics anywhere in the world. The villa is long gone, but the floors were preserved by deep mud from a flood. Forty- two rooms of exquisite mosaics. Much of the island was heavily damaged by an earthquake in 1693 and rebuilt in the prevalent Baroque style. Sicily is poor today because it is primarily agricultural, but back then it was rich for that very reason.


Tuesdayis Ragusa (which was also the old name of Dubrovnik), noted for its Baroque churches. Good, but half a day is plenty. Then onto Noto. Morebaroque. We arrive during siesta (12:00 - 4:00 daily), so everything isclosed. They don't work very hard in Sicily: business and opening hoursare generally 10 AM - noon, and 4 - 7 PM. Ergo, not long time to see Noto.


Then, on to Syracuse. As the principal tourist base, it hasthe best-developed tourist infrastructure. It is also my favorite; driving and parking are relatively easy. It was a major Greek city (hometown of Archimedes) until conquered by the Romans, and subsequently, by everyone else. 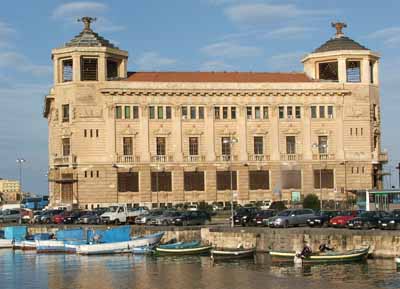 It'san easy day, with lots to see. The weather is perfect. The next day, Wednesday, it is pouring, but the extensive museum provides a dry refuge.

On Thursday morning we stop in at the Greek theater and the quarry site known as Dionysus' Ear. It was a combination ticket with the museum -- otherwise I would have reported the 4.50 euro admission price to the economic crimes division of the EU. 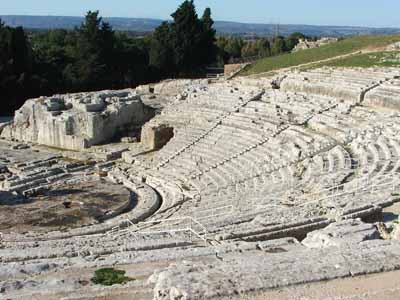 Then,on to Catania, Sicily's second city. It's the Festival of St. Agatha,which means that the streets are packed. Scarlet A's adorn the buildings (but not the women).

Friday, we drive further up the coast to Acrireale, another Baroque city, which is in the midst of Carnival festivities.

Then, up the snowy slopes of Mt Etna. Higher and higher,through the hardened lava flows. At the end of the road is a cable car,and there are hikes to the crater, but we don't. The volcano is active,but not erupting at the moment. Souvenir shops sell all sorts of traditional Sicilian figures made from the black lava: Buddhas, Krishnas, and King Tuts, I buy a Mussolini. 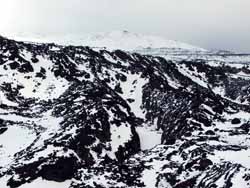 Myplan is to spend the night in Taormina, pitched as the "pearl ofSicily." It's the most popular destination in Sicily, but I figure itshould be okay in the winter. Instead I discover is that is the most unwelcoming place on the island. The hotels charge astronomical rates.There are some some smaller ones, but you can't drive to them. There is NO PARKING for visitors except in expensive and remote garages and lots. I take the hint and continue the rest of the way up the coast to Messina.

Messina was not the itinerary. Most people cross over from the"toe" of Italy opposite and keep going. The city was leveled by an earthquake in 1908 and rebuilt in an ugly earthquake-proof style. There are still a few interesting buildings and sights. 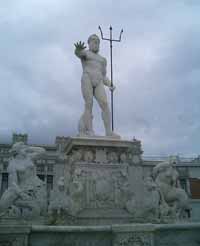 Saturdaymorning I give Taormina another chance. A garage offers 60 minutes parking for one euro, but at 61 minutes the fee jumps to five euros. I beat the clock and the system. The town is a museum village -- prettified buildings and shops, shops, shops. Even in the off-season the streets are crowded. A quick walk through is enough for me. I take exactly one picture. There is a Greek theater overlooking the sea, but to see it would cost 4.50 euros plus 4 euros for the overtime parking. Fugettaboudit. 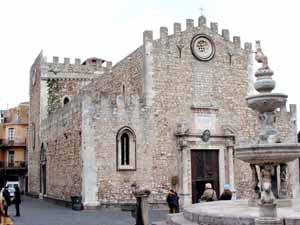 It'stime to start back. I pick a route on a secondary across the island. Very scenic. Then, along the coast with a stop at Tindaris, another Greek city (with theater). 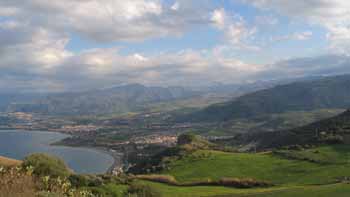 Finally,back to Palermo. With a week of aggressive driving under my belt I findmy way back to the hotel find parking like a local. (Not really,because I still don't use the horn as a primary control.) It's the weekend, so a luxury hotel at a reasonable rate is again available. The hotel won't cut any deals for Sunday night and we have an early flight,so we transfer to a one closer to the airport. Then, a visit to Monreale, on the heights overlooking Palermo, where the cathedral contains another eye-popping collection of Byzantine mosaics. 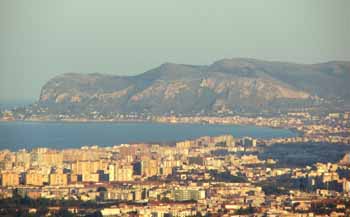 Mondayit's four flights to home: to Rome; to Amsterdam; to Detroit; and to Jacksonville. The Super Bowl is over and gone. I missed the party, but didn't miss it a bit.