A (Quick) Tale of Two Cities

I continue my exploration of Germany piecemeal ? this time it's Munich for a long Thanksgiving weekend. Plus Bern.

I meet up with my nephew who is studying in Strasbourg and, age taken into account, is way ahead of me in the travel game. He, too, is a history buff and hasn't been to Munich yet.

The 10 day forecast is typical for November: 10 days of rain. The first day proves out. After that, the days are unexpectedly warm and sunny, though short.

The first day is a brief walkabout the old center. There is no trace of the extensive bomb damage shown in 1945 photos. There was almost no ground fighting, and the city shows very little war damage. (Though the hills in Olympic park consist of carted-in bombing rubble.) We are too early for the big Christmas market, which is just being set up.


Thursday is the first full day, which we begin at the Deutches Museum, the largest science and technology museum in the world. There is no way you can see it all in one trip, nor would you want too. Lots of industrial exhibits of little general interest, but something of everything. Display of Nazi militaria is forbidden, so on exhibit are the "civilian" version of the V-2 rocket and the Junkers bomber. Underground is devoted to the Bergwerken, which are recreations of several types of mines.


In the afternoon we visit the Residenz, the city palace of the Wittelsbachs, the Bavarian royal family. The most famous member was the "mad king" Ludwig II, who built the fairy tale castles in the surrounding Alps. (The model for Disney's Cinderella's Castle.) It's typical, European, over-the-top, palatial d?cor.


Friday we start out by walking through Schwabing, Munich's bohemian district and the home of a number of graceful art nouveau edifices.


Then, a stroll through the Koenigsplatz, a plaza of neoclassical museums built during the delusional era of Bavarian grandeur.

Saturday is a half-day and our last in Munich. We get on the train to Dachau, a prosperous suburb with a notorious name. Not far from the center is the original concentration camp, set up in 1933 for political opponents and the place where the camp system was developed and future war criminals cut their teeth.

Due to general historical ignorance, Dachau is conflated with the "final solution" and the death camps, and the recent (2003) museum placed in the sole surviving barracks does little to correct that impression. Truth be told, Dachau was not a very fatal place; prior to the war, the mortality rate was about 1.5%. During the war, the camp expanded greatly into a transit and distribution center for the slave labor system and many prisoners died from mistreatment and sickness. Interestingly, the camp was used for refugee housing until the 1960's. Because of its proximity to Munich, it is a big tourist destination and the only such site most will visit. There is not much of a sense of place -- aside from the famous "Arbeit Macht Frei" gates, the exhibits could be most anywhere. 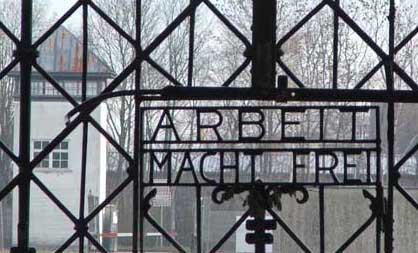 I bid farewell to my nephew and head to the airport for my flight to Bern. The ticket only cost $24, but then they tack on $100 in taxes and junk fees. As the evening grows, I enjoy excellent aerial views of the Alps and Zurich. (Too dark for a photo.) 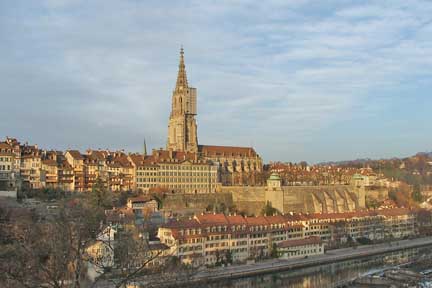 Bern, situated on a bend in the Aare, is the capital of the Swiss Federation. It is small, pretty, prosperous, and expensive. Its symbol is the bear, from which its name is derived. There are bear statues everywhere and a bear pit in the city center. Albert Einstein worked as a patent clerk here while figuring things out.


There is a big cathedral and lots of big clocks (this is clock and watch country) but not a lot of big sights. The historical museum is quite good, tracing the city evolution from pre-historic and Roman times with a couple of surprises. A Berner sailed with Captain Cook and brought back a high quality south seas collection, and another hometown boy was an early explorer of New Guinea.

My visit coincides with the Zibelemarit. The translation is "onion market," but it's much more than that. For one day a year, the fourth Monday in November, the normally staid Berners let their hair down. Starting in the early pre-dawn hours, the streets are crowded with stalls selling onion wreaths, onion dolls, onion toys, candied onions, and onion everything else. Later on, the scene deteriorates into the Konfettischlacht ("confetti battle"). It's what you think, plus everyone is bonking each other with giant plastic hammers.


Picking confetti from my hair, I head for the airport and home.