Transportation is less than convenient: if you want to see anything you need a car, but parking is almost impossible in the cities (very much like Sicily). Taxi fares are exorbitant, and public transport is limited to intercity routes.  Most tourists get hauled around on tour buses, hardly my style.  At least there is an airport shuttle to Nicosia. I was in Athens this morning, but by the time I reach my hotel it’s dark.

I've got a week.  Well, now six days.   Nicosia (local name Lefkosa), in the center of the island, is a walled city, roughly circular, bisected by the UN line on an east-west axis.  My plan is for a day in the south half of the city, another in the north, then figure it out from there. I start a walking tour of the medieval wall, pretty good but less interesting to me than the modern wall: a barrier of cars, rubble, sheet metal, barbed wire and household junk hastily thrown up between abandoned buildings and across blocked streets.  Nicosia takes as much pride as shame in being the last divided city in Europe.

The modern city sprawls to the south, but I confine my rambles to the old, walled city.  The sights in the southern half prove limited: most of the good stuff lies north of the “Green Line” that demarcates the “border.”  The highlight is the Cyprus Museum, a legacy of British rule – lots of Greek and Roman and earlier artifacts. 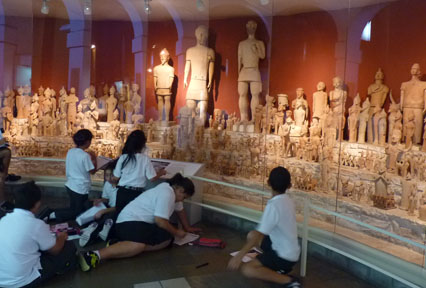 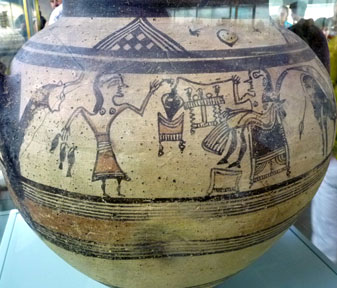 So I advance my schedule and first the afternoon walk up the main pedestrian street lined with shops and cafes (and McDonald's) to the crossing point, opened to pedestrians a few years ago as tensions eased.  Now, there is free passage for anyone with a passport or EU identity card. The other side is a continuation of the same street, except that everyone is Turkish.  The south uses the euro and the price level is what you would expect: high.  Here, Turkish money is used, and prices are way more reasonable. 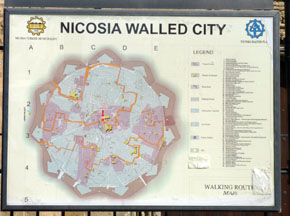 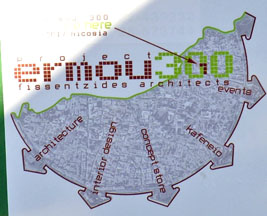 Almost in the exact geographic center of the walled city is the former St. Nicholas Cathedral.  When they took control of the island in 1571, the Ottomans converted the gothic church into a mosque, adding a minaret.  Nearby are ruins of other major church edifices as well as several Ottoman era structures.  The northern half of the city was the Turkish half  -- hence the occupation – but there are a few large churches still standing.  (I think they are closed, as are the mosques in the south.)  The day is getting long, and it’s a fairly long hike back to my hotel in the south, so I skip the Museum of Barbarism, devoted to the atrocities committed by the Greeks on the hapless Turks. 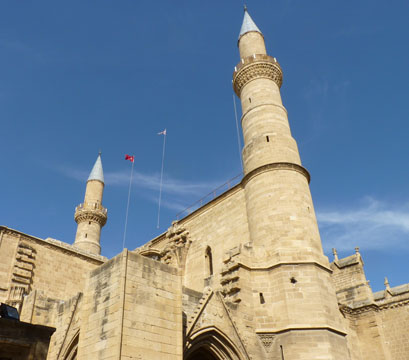 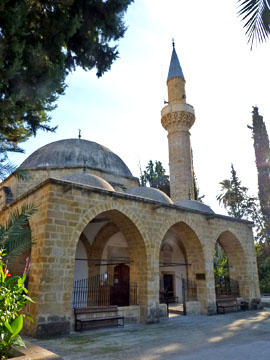 Cyprus has several large archeological sites outside the modern cities, but there is  no easy way to get to them without a car.  For that reason, I decide traveling to other cities in the south would be fruitless.  In the mountains are what are reputed to be very nice ancient churches, but the transportation problem still holds.  So I decide to terminate the southern strategy and advance the northern agenda.

According to the guidebooks, the top scenic spot on the island is Kyrenia (Turkish name Girne), just a half-hour north of Nicosia   Unlike the overly-affluent south, car ownership here is not universal so buses are cheap and frequent (every ten minutes). The next morning I am back across the border and on my way to the northern coast.

The suburbs of Nicosia also sprawl north, fueled by money from the Turkish mainland.  Rather than forcing compromise and reunion, international sanctions and economic isolation have driven the northern rump state even closer to its sponsor. Immigrants from Turkey have replaced the departed Greek populace.

Kyrenia mirrors but does not replicate the development in the south: a small, prettified historic city supported by vacation high  rises along the adjacent coast.  The old town features a large castle/fortress protecting a medieval harbor.  Nowadays the castle is open for visitors and the harbor is full of pleasure boats.  The surrounding warehouses are now shops and restaurants. 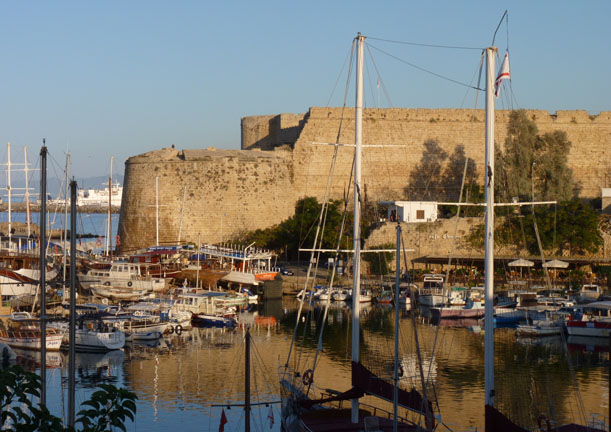 The castle dates from the 7th century.  It was expanded by the Crusaders (Richard the Lionhearted captured it), and its current form is largely 16th century Venetian.  Inside is a a shipwreck museum exhibiting a Greek merchant ship from the 4th century BC that was recovered along with its cargo just offshore; its reputedly the oldest (sort-of) intact ship in the world. 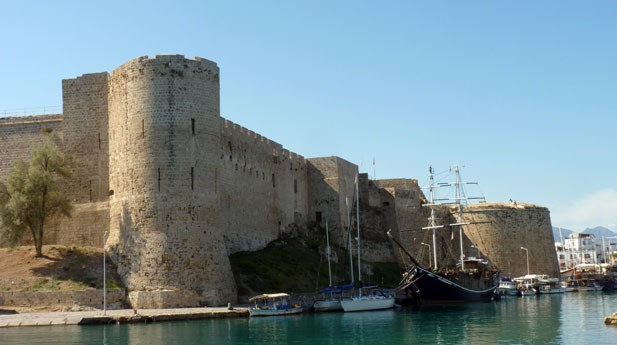 I also find a new base camp: the season being over, I can get a large room w/ balcony overlooking the harbor for $50.  I don’t have my luggage and I've already paid for the night in Nicosia, so back I go across the Green Line.Another day, another border crossing.  Just a few years ago, this shuttling about would have been impossible.  I move to Kyrenia, where I spend the day doing exactly nothing.  The weather is and has been perfect: sunny and clear with highs around 80.  This is the Mediterranean climate people love; beats me why the brutally hot summer is the high season.

Friday I rouse myself and set out for Famagusta (Turkish name Magosa).  An ancient, walled city, it was the principal port for modern Cyprus and the center of its tourist industry.  Its location on the new border and the exodus of its large Greek population have created a ghost town ambiance. 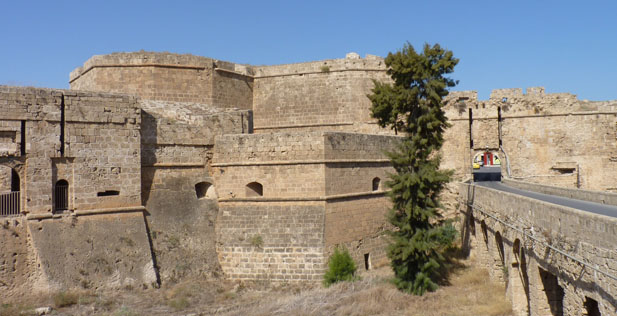 The former Greek quarter is now behind barbed wire and off limits. 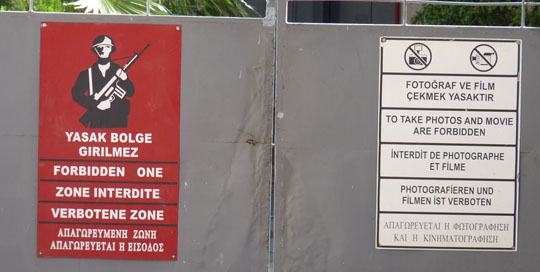 At the center of the city is another even better Gothic cathedral turned mosque.  It was here that coronations were held for the Crusader Kingdom of Jerusalem.  Ruins of great churches and palaces lie nearby. 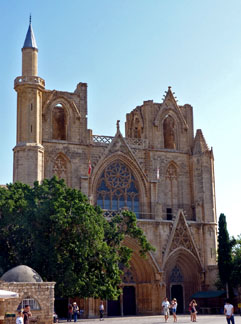 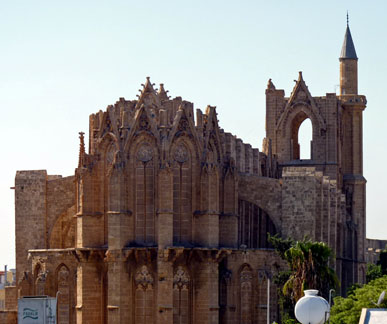 Protecting the harbor is Othello's Tower, so named because the Brits decided that Shakespeare’s placed the abode of his fictional Moor in this citadel.  It is largely Venetian, and the walls still bear prominent carved Venetian lions of St Mark. If this were somewhere else, it would be overrun with tourists, but visitatiton is sparse.  Any easy and pleasant day trip. 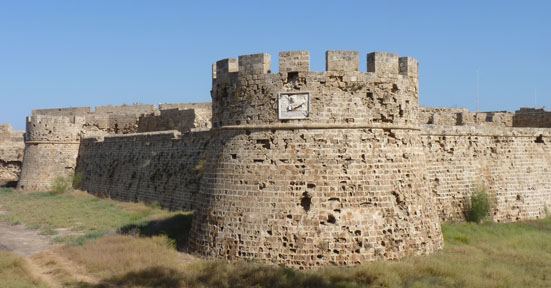 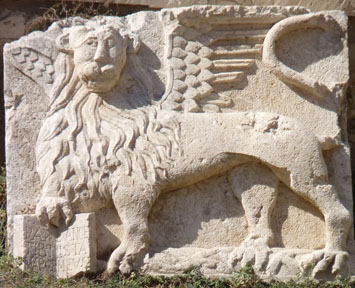 I have decided that Cyprus is really a four day place but I have longer, so I take the next day off as well.  Wandering the ancient streets of Kyrenia, I am surprised to see a very attractive, fashionably-dressed girl on a bicycle; turns out to be a photoshoot: she rides past the cameraman over and over with the ancient city as a background.

Sunday is my last day on Cyprus.  The program consists merely of hauling myself back to Nicosia.

An early Monday morning flight to Athens connects me back to Jacksonville that afternoon.  Two more tick marks, thank you.