I haven't been to Quebec since Expo 67, and I never made it to Ottawa. I decide to remedy that situation by redeeming a few rapidly depreciating frequent flyer miles for a ticket to Montreal. What strikes me as we drop down on the approach is that almost every house has an outdoor swimming pool in the backyard. The must love cold water. And do they leave them up all year and practice their skating?

Canada takes the prize for having the most inhospitable entry formalities. My welcome here is a reprise of my visit to Vancouver -- once again I am shunted off to be interviewed by an immigration officer and then my luggage searched by customs. This never happens to me anywhere else. If I were wearing a turban and a robe they probably wouldn't be giving me a second glance. 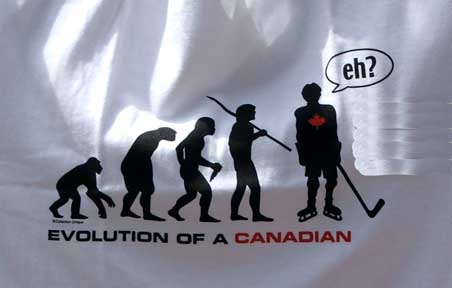 By the time I get out and pick up a car, it is already evening. I set out on the inadequately maintained and poorly marked road to Ottawa. Good thing the daylight is long in June up here near the North Pole. Most of the journey is through scenic but unremarkable countryside. Ottawa is pretty much in the middle of nowhere, about halfway between Montreal and Toronto, and was but trading post until selected as the national capital as a compromise between those two cities vying for the designation.

I've timed my visit for the weekend in the hopes that it will be less crowded. In morning (Saturday) I drive into the city center. First stop is Parliament. The only way to see the inside is to take a tour, which are free but require timed tickets. There are an equal number in English and French, although the demand ratio is about 4 to 1. All the French tours are still open, if I had wanted more than a single ticket on an English tour I would have to wait for hours.

The tour guide spiel is predictable, politically correct nonsense. Did you know that the purpose of the Senate, which mimics the House of Lords in a country without aristocracy, is to "represent minorities?" The building is quite impressive, rebuilt in 1919, "The Year of our Victory," after a fire. The legacy of the Great War predominates from giant murals of battle scenes to statuary to the memorial chapel and carillon. Much as in Australia and New Zealand, WWI was particularly traumatic to those who went to a far-off land to fight for King and Empire and rather than glory encountered unremitting carnage and slaughter. The WWI memorial in a near-by plaza is massive and somber. It has been supplemented by newer monuments more in keeping with the current ethos such as to "peacekeeping" and "veterans of the first nation" and (I am not making this up) "women are people too."

Something else: there are no longer any Indians in Canada. Oh, there are lots of Hindus and south Asians, but the historic word for Native American (another stupid neologism) has been vanished down the memory hole: it's all now "First Nations" and "First Peoples."

The city boasts a big, new Canadian War Museum, to which I devote the rest of the afternoon. It's quite good, even init though there are no victors, only victims. The galleries begin with the first European settlements and ends with the glory of international peacekeeping. The layout leaves has no room for expansion, revealing a conceit that they have reached the end of history and there will be no more wars. There is also a very cool collection of big hardware from all over, most of which has nothing to do with Canadian military anything.

Two days hence is Canada Day, when the teeming multitudes will converge on Parliament Hill. They are already setting up the stage and equipment. I intend to skedaddle before then. Preparatory to the big event is the annual Royal Canadian Mounted Police Musical Ride, a precision riding show. It is presented at the RCMP stables for a few days before touring for the summer and is free. I have a hard time saying no to free.

The show is pretty good, although I could have done without the hour of filler preceding it. The crowd is sparse because it has been raining all day.

On Sunday morning, a bit of the offbeat: 25 miles west of Ottawa beneath rolling farmland lies an underground bunker to which the prime minister and government officials would evacuate in the event of nuclear attack and continue to run the country. It is now open to visitors as a cold war museum. Reservations are necessary because, even though the complex was built to house 500 people for a month, the lack of multiple exits means that the fire marshal allows only a couple of dozen people inside at a time.

You leave the highway, drive through a coupe of small towns, turn down a dirt road, go through a barbed wire gate, and park on the helipad. The only visible structure is a small metal hut at the base of a hillside. Inside, it's cold. You walk down a tunnel and turn at the large a-bomb. Entry is through an airlock protected by blast doors.
. The tour lasts 1 1/2 hours and takes you to all four underground levels. There are living and dining quarters, offices, meeting rooms, and specialized facilities. Situation rooms are ready track the spread of radioactive fallout on large maps. The CBC can seize control of the network and broadcast from the bunker. There is a massive vault to which the country's gold reserve could be transferred. To keep things cheerful during a nuclear war, the color scheme throughout is bright pastels. The latest in 1970's office, communication, and computing equipment stands at the ready. Most of the complex is empty, but a number of rooms contain informational displays and cool memorabilia.


In the afternoon I embark on the too-long drive to Quebec City. It's supposed to take 5.5 hours, but turns out to be much slower. At $5.50/gallon, pumping fuel into my compact Nissan makes me feel like I am filling an SUV. It's dark by the time I arrive at my hotel.

Quebec City was the seat of French North America and remains the capital of Quebec province. It lies on the mighty St. Lawrence River, the primary water route between Europe and the Great Lakes. Founded in 1608, it fell to the British in 1759 and was thereafter eclipsed by Montreal further upriver. July 3rd will be the 400th anniversary of the founding, and the whole city is ramping up for the festivities and visitor onslaught. I take advantage of this Monday lull.

The city is European charming, prettified for tourists who are the economic mainstay. There are quaint streets, nice churches, fine public buildings, pleasant walks, and good photo ops. A full day is enough to walk around and see the sights. The signature Chateau Frontenac, a hotel that is the most photographed building in Canada, forces itself into almost every scene. Since I don't shop and don't lounge in cafes, the two major visitor activities take no time from me.

To my pleasant surprise, there is no language difficulty. Everything from, by, and dealing with the government, i.e., the world of command and control, is solely in French. Anything that involves persuading you to voluntarily part with your money is in English. They may talk French to each other, but as soon as they turn to a tourist they speak English. How else would they communicate with the busloads of Chinese and Japanese tourists?

Tuesday, July 1st, is Canada Day. I evade the crowds by driving to Montmarcy Falls, just out of town. At 272', it is 98' higher than Niagara, but, of course, much smaller. 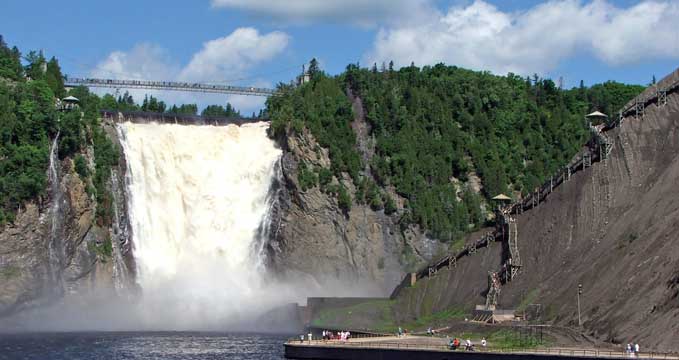 You start at the bottom and climb stairs to the top, from which you can gaze up the river at Quebec City. I then drive the loop road around the historic and scenic Ile d'Orleans, a 20 mile long island in the St. Lawrence River that is very rural, very scenic, and the heart of French Canadian settlement.

A bit further upriver is the Basilica of Ste. Anne de Beaupre', the Lourdes of Canada, which has drawn the faithful since the mid 17th century. Over a million and a half pilgrims a year come here, many seeking miraculous healing. Mounted on interior columns in the large gothic church are crutches and canes which, presumably, were no longer needed after divine intercession.

In the late afternoon I head towards Montreal. On the outbound leg I followed the southern shore of the St. Lawrence River. I take the northern road back. Both sides have modern freeways, so there is not much difference. When I arrive at Montreal at dusk, throngs of pedestrians are streaming towards the old port. After checking into my nearby hotel, I join them.

At the least I was expecting fireworks. Instead, there is mostly a teeming mass of humanity. The big Canada Day fireworks display is happening in Ottawa, and Quebec City will be having a blowout show in two days hence. Montreal is hosting an international fireworks exposition on various Saturdays; it's a paid event, so I guess they don't want to compete with themselves. I still can't figure out why everyone is milling about the old port. At least they light up the old buildings nicely. I go home to the hotel and to bed. 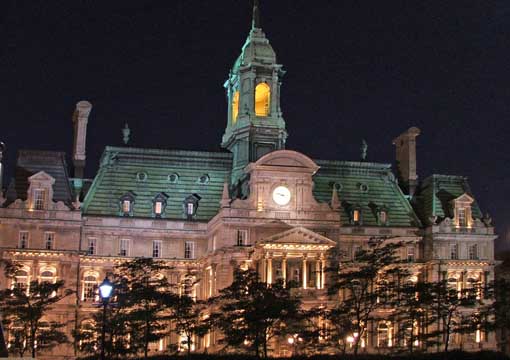 Wednesday is my walking tour. Montreal is a nice looking city, a bit of Paris and London in North America, with a modern city and a geographically distinct old quarter. There are plenty of tourists, and plenty of panhandlers. (What do they do the other ten months of the year, winter at their condos in Florida?) The big draw for me is Chinatown Đ more accurately Indochinatown Đ and its Vietnamese restaurants. None of the visitor attractions is sufficiently appealing for me to pay an admission charge.

What's going on and is free is the Montreal Jazz Festival. Just a few blocks from my hotel the streets have been blocked off and outdoor stages erected. I overcome my dislike for crowds long enough to listen to a bit each evening. Best act: Les Moonlight Girls, a/k/a, "The Triplets of Montreal," who perform big band numbers, a la The Andrews Sisters.

Thursday is my last full day. Unfortunately, the clear weather does not hold. In the morning I drive around in the rain. One stop is St. Joseph's Oratory, which boasts the third largest dome in the world. It is set on a hilltop and looks pretty impressive from a distance, but turns out to be pretty plain up close. 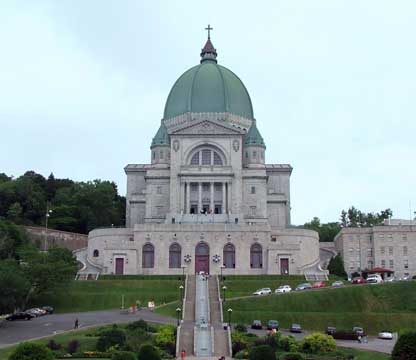 I visit the site of Expo 67 on two islands in the river. The only remnants of the last great international exposition are the signature geodesic dome which housed the U.S. pavilion (now the Biodome, some cheesy eco-museum), the Canada pavilion (now a casino), and some outdoor sculpture. Other than those, the site is just a park.

Other than the city's metro, the only other major remnant of the fair is Habitat 67, easily visible from the site and opposite the old port. Its futuristic design now looks like a bunch of stacked-up FEMA trailers.

My interest in matters touristic does not extend to driving to see the Olympic Stadium, much less paying for a tour to view the inside. If the weather were better I would visit the Botanical Gardens, which are reputed to be excellent.

That's it. On Friday my week is up. Satisfied that I have seen enough, I loll about until time to leave for the airport for my noon flight out.