When Koryo (my fave tour company) announced this year’s oddball destination, I was the first to sign up. (That will be Part II of this report.) But no sense in going all that way for just a few days, so I request the sponsoring agency to extend my invitation (a prerequisite for a visa) to encompass an independent tour of the southern Volga region.

After flying to Moscow, I connect to a domestic flight to Astrakhan, just above the delta where the Volga empties into the Caspian Sea.  Ivan IV (a/k/a “The Terrible”) conquered the city in 1556, defeating the local khan. To celebrate this addition to his empire he built the famed, colorfully onion-domed St Basil’s church on Moscow’s Red Square. The Russians built a citadel (kremlin) on the river (which has since shifted course a bit).

I arrive around midnight and check in to the beautifully restored Astrakhanskaya Hotel, built in the 1880’s and located between the Kremlin and the river.

The walled area is quite large and contains a couple of churches, a few small museums, and a number of buildings of indeterminate use.

On the landward-facing plaza outside the walls is a Soviet-era statue of Lenin. In front of the post office is one of Kirov (as in Leningrad’s Kirov Ballet) who was a Bolshevik commissar here who responded in to a workers revolt in 1918 with thousands of summary executions. There has been little or no effort to expunge this history: streets still are named after soviet butchers or bear names like “communism”.

Lenin (née Ulyanov) was born in Simbirsk, further upriver. His father and grandfather lived in Astrakhan. For the centenary of his birth in 1970, the family’s house was opened as a museum. Now the City History Museum, the displays are expanded in scope beyond the Ulyanov story.

Another house museum is the very large, three story log house of a wealthy merchant. As in all my museum visits, I am the only customer; the few cents I pay in admission justifies a staff of middle-aged women.

Astraskhan is a city untouched by war: the closest the Germans got was about a hundred miles. Even close to the city center extant are a large number of 19th century wooden and log houses.  (But just because you live in a log house doesn’t mean you can’t have air conditioning._

My visit to the Museum of Military Glory ensures the continued employment of at least 20 staff. The history portrayed pretty much begins in 1918 and ends in 1945, but in the basement there is a mural-sized photograph of the “victory” column leaving Afghanistan.

A stroll along the riverbank is a popular pastime in the warm summer evening. In the no-sense-of-irony dept: the rallying cry of the Great Patriotic War (a/k/a World War II) was to smash Fascism. So what flanks the newish statue of Peter the Great on the Volga embankment? Giant fasces.  Nearby, enthusiastic knitters have decorated the tree trunks.

There seems to be a strictly-observed rule of fashion: any writing on T-shirts must be in English. A corollary rule: the names of stores and commercial establishments must be either in English or transliterated into Russian. (When you sound it out you get an English word.)

The Caspian is the source of caviar. Because wild sturgeon are endangered, the supply of the delicacy comes from farmed fish. There is even a refrigerated case of product in the hotel lobby.

A couple hours out of town is Old Serai, the capital city from which Batu Khan, grandson of Genghis Khan, led the Golden Horde. The site has been rebuilt as a movie set. It’s all fake, but looks great.

After three days, it’s time to move on. I take a minibus to Elista, capital of the Kalmykia Republic, the only Buddhist republic in Europe or Russia. The Kalmyks migrated from Western Mongolia around 1600 to the area north of the Caucuses (its southern border is with Dagestan).

I check into the Hotel Elista, a concrete pile in the center of the city. It is a very soviet experience. My suite has three rooms, massive, ugly furniture and rudimentary plumbing.  All for 2000 rubles ($35). It’s on the fifth floor, which is the top floor.  The numbers on buttons one through five in the elevator are worn away; six through 15 are pristine.

It’s like being in outer Outer Mongolia. The Kalmyks rarely intermarry with other ethnicities, so they retain their distinct facial features. Traditionally they were nomadic herders, but fared very poorly under Stalin’s forced collectivization. Their animals were seized and their temples destroyed. After the region was reconquered from the Nazis, they were collectively judged to be collaborators and deported en masse to western Siberia where my guide at the National Museum (again, I am the only visitor) was born.

Both national pride and religion have undergone a revival. The showplace is the very active Golden Temple, completed in 2005. The Dalai Lama has visited twice. My T-shirt from Tibet gets lots of approving glances, and the woman at the gift shop insists on bringing me to the break area for (undrinkable) Tibetan tea. 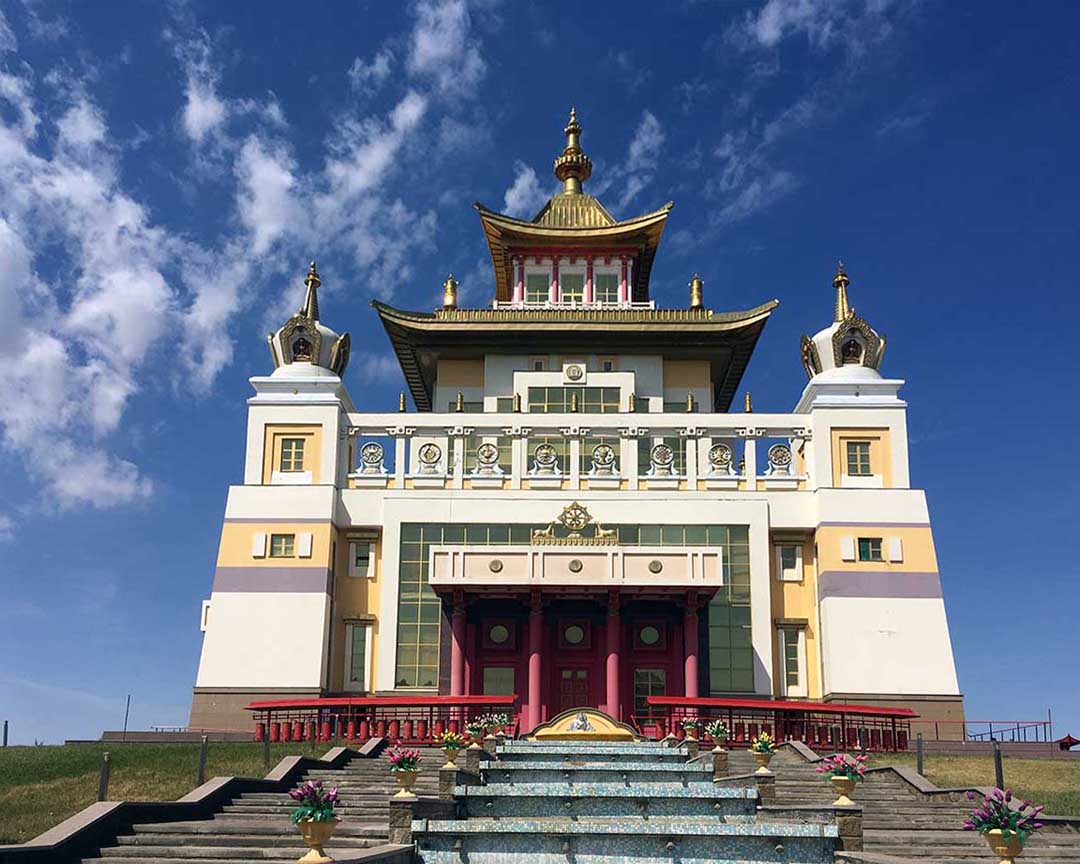 Elista was just a one-night detour on the way to Volgograd. Another minibus takes me to my hotel at the heart of the city formerly known as Stalingrad.

So much 20th century history! During the post-Revolution civil war the ancient trade city of Tsaritsyn fell to the Whites. Its retaking by the Red Army was a major event and led to its renaming. Intended by Stalin to be his eponymous showcase of Soviet industrial modernity, everything was built to a grand scale. The 1942-43 Battle of Stalingrad, arguably the greatest and fiercest in history, was the turning point of The Great Patriotic War.

My hotel is part of the former TSUM (Central Department Store), where the final German command was headquartered. The historic theme is played to the hilt: the approach is surrounded by tank traps and the lobby decorated with period memorabilia. The room keyring: a rifle cartridge.

The rooms are something else: my sitting room is large enough for ballroom dancing and has a balcony overlooking the plaza suitable for speechifying. The other three rooms of my suite are equally grand.

In the morning my first destination is Mamayev Kurgan, the highest point in the city. It changed hands eight times during the battle.  It’s a long walk in the summer heat up the stairs to the monuments at the top of the hill, but it sure beats having to fight your way up in the dead of winter. The signage is in Russian, English, and German, the latter presumably to cater to visitors who come not for nostalgia, but to see where their relatives perished or vanished.

Atop is is the the largest free-standing statue in the world: “The Motherland Summons You.” The name and image are self-explanatory.  From it, a sweeping view to the Volga.  (The new World Cup soccer stadium is to the right.)

Just below is a very solemn memorial hall where an honor guard stands day and night.

In a side grove, a modern church has been added.

On the banks of the Volga is an overly comprehensive museum. Good thing only a tiny percentage of the caption are in English; otherwise, I would still be there reading. Atop is a 360° panoramic battlefield diorama and surrounding is a extensive display of military vehicles. On the site is are the ruins of a factory preserved as a reminder of what the city looked like after the battle.

As a symbol the victory, Stalin had the city rebuilt bigger and more glorious than ever.

At one point the Germans held 90% of the city, but he Russians continued to fight, block by block, house by house, room by room. The train station changed hands thirteen times. However two pockets on the Volga held out, which the Soviets were able to resupply, reinforce and launch the counterattack which ultimately led to the German army being completely surrounded.

The final German headquarters in the TSUM basement, just steps from my hotel, is now a museum. From here General Von Paulus surrendered the once-triumphant 6th Army, now frozen and starving. Fewer than 5% would ever see home again.  Many of the rooms have been preserved in situ, but a modern 360° immersive theater and holographic displayed have been added.

Outside the city, at the entrance to the Don-Volga canal is the world’s largest Lenin statue. (The statue is a replacement; it was originally of Stalin.) The canal, dug post-war by close to a million POWs and other slave laborers, connects two major riven basins. Ships entering the locks pass through a triumphal arch.

My next city is not all that far, but getting there requires either a 24 hour rail journey or two fairly quick flights via Moscow. Under a tightening schedule, I opt for the latter. Volgograd’s airport lies some distance away at Gumrak — the retaking of this airfield by the Red Army sealed the fate of the trapped Axis forces. This is the first and only airport I have been where frozen and refrigerated fish are sold in the departure lounge.  Not buying due to concerns about spoilage?  In the Moscow airport you can buy cosmonaut meals in squeeze tubes from a vending machine, no refrigeration needed.

I land at Kazan, capital of Tatarstan, a once-independent Khanate conquered and added to the Russian empire. The heart of the city is its kremlin.

In addition to 16th Russian Orthodox churches, a mosque was added in 2005.

Slightly exotic, Kazan attracts many Russian tourists. Much of the pre-Soviet architecture has been preserved and restored. My hotel is one such building near the main gate of the Kremlin. A few doors away is the former residence of a wealthy merchant. It is now part of the library of Kazan University, but surrounding the stacks much of its elegance is still visable.

On the pedestrianized tourist street there is a privately-run Museum of Soviet Lifestyle, crammed with memorabilia. It is geared towards nostalgia, not the horrors and deprivations of oppression. (The nearby, competing Museum of Happy Childhood is even more bluntly named.). Two items of note: a classroom bust of Pavlik Morozov, the “model soviet youth” who informed on his parents (who were then sentenced to death) and in turn was killed by the rest of his family; and the 1970’s soviet answer to the Princess phone.

Just outside the city is the quirky Temple of All Religions, a mishmash under construction since 1992 by an eccentric artist/philanthropist and incorporating architectural flourishes from the major religions of the world.

An overnight train journey brings me to Nizhny Novgorod, my final destination on this portion of the trip.  During the Soviet era the city was renamed Gorky for the hometown poet and was closed to foreigners — the dissident physicist Andrew Sakharov was exiled here to prevent contact with western press. It is a handsome city on the Volga with much of its pre-Revolutionary splendor preserved.

The mansion of a wealthy merchant, now a museum.

The Kremlin contains mainly government office buildings, but commands a sweeping view of the Volga. The long steep hill down to the embankment features a grand staircase built by German POWs.

The opposite bank is reached by cable car.  From it, there is a bird's-eye view of the the 400 year old Pechersky Ascension Monastery.

Which I thereafter inspect up close.