Sudan doesn't get much good press these days: Darfur, Islamic terrorism, civil war in South Sudan, a President wanted by the International Criminal Court -- feh, fake news! All the better because it keeps the tourist hordes away.

My Mexican friend, Agustin, and I have booked a private tour of the upper Nile valley.

Inbound flights -- ours from Istanbul – (not so) conveniently arrive and depart in the middle of the night.  The discomfort is minimized by being met inside the airport, whisked through immigration and driven the 15 minutes to our hotel where our room keys are waiting.

The first day is a city tour. Our guide hands us a thick stack of Sudanese 50 pound notes -- the highest denomination available -- each worth about a dollar. 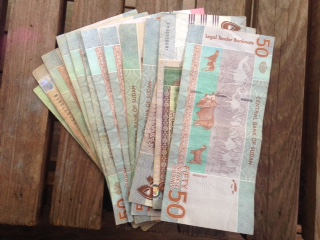 First stop is the former Anglican cathedral, now the Revolutionary History Museum.  The old is represented by life-size portraits of King George and Queen Mary, a young Winston Churchill, (who served here as an army officer in the 1880’s), and a young and slender King Farouk.  You remember the movie, Khartoum, in which General Charles 'Chinese' Gordon, (Charlton Heston) loses his head to the Mahdi (Lawrence Oliver).  The building has the remains of a chapel dedicated to Gordon (half the lettering is gone), but the museum exhibits are devoted to the Mahdi.

For the first half of the 20th century Sudan was jointly administered by Britain and Egypt; the displays covering this period, mostly photographs and minor memorabilia, are a blur.  Independence came in 1956: the clear message of the museum is anti-colonialism and the worthiness of the current leadership.

We board a small boat.  Just a bit upstream is the confluence of the White and Blue Niles, the former having snaked thousands of miles from Lake Victoria and the latter arising  from Lake Tana in the Ethiopian highlands.  The search for the sources of these two rivers was a continuing Victorian adventure saga in the 19th century.  Khartoum is not an ancient city, but was made capital of Sudan by the Ottomans due to its strategic location. 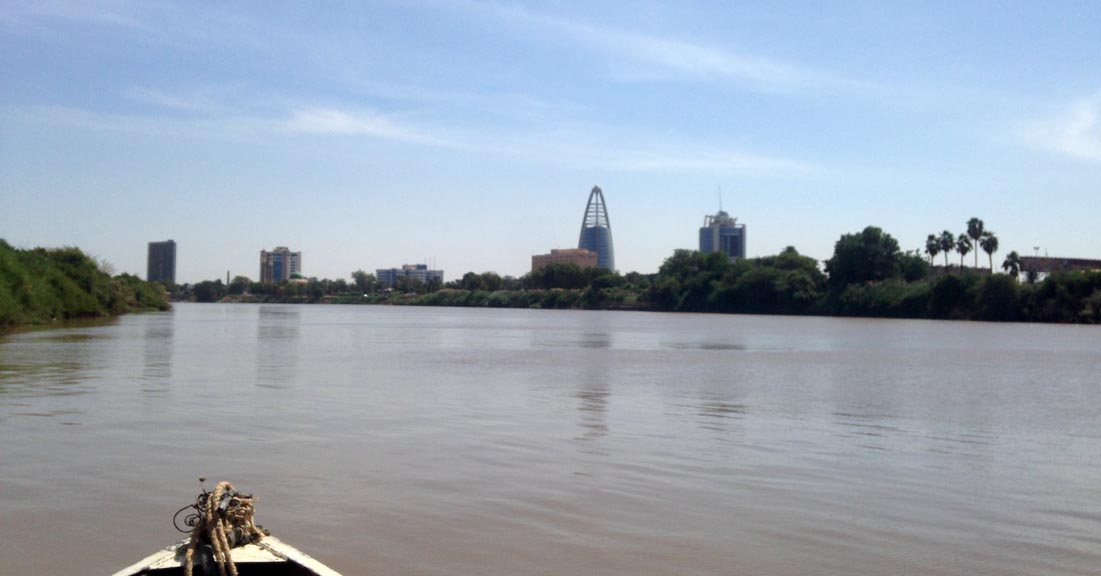 The National Museum goes all the way back to the paleolithic times, but the interesting stuff is the Egyptian and Nubian collection and the early Christian frescos.

Because it's Friday, the Muslim holy day, much of the city is shuttered,  but the merchants selling stuff to tourists are not so we get our souvenir shopping done at the beginning of the trip. 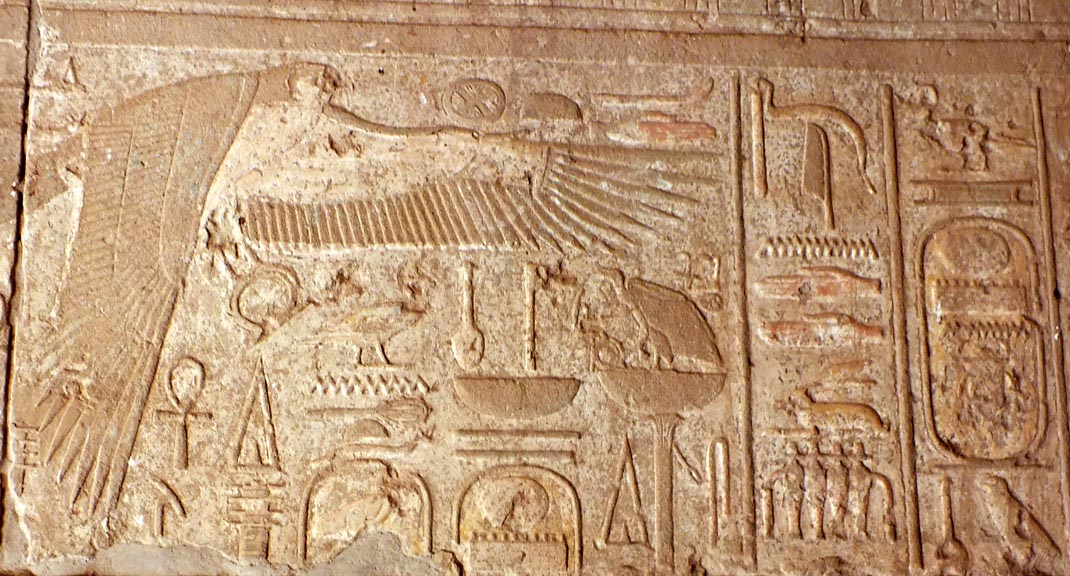 The tomb of the Mahdi is closed, but this is the day of the week when large groups of Sufis -- Muslim mystics -- gather near its entrance to sing and dance.  In Turkey they are known as dervishes. The celebrations here are more spontaneous and informal. beginning in late afternoon and continuing into the night.  Still jet lagged and with and early morning departure, we don't last long.

Saturday morning we board a Toyota Land Cruiser packed with camping equipment and supplies to begin our week-long road trip. The vehicle is tough and its AC is strong. Our crew consists of a driver, a guide, and a cook.

We head north. Although the roads are good, it takes most of the day to reach our first destination, Old Dongola, capital of Makuria, a Christian kingdom that lasted from the 6th to the 15th centuries.  All that’s left are the ruins of its cathedral, several other churches, and a fortified palace-like structure.

We end the day camping in the Kawa sand dunes. The tents and other equipment are comfortable, but it sure does get cold at night in the desert!

After breakfast we continue north. It's a fair distance to modern Dongola, a bustling but uninteresting city. 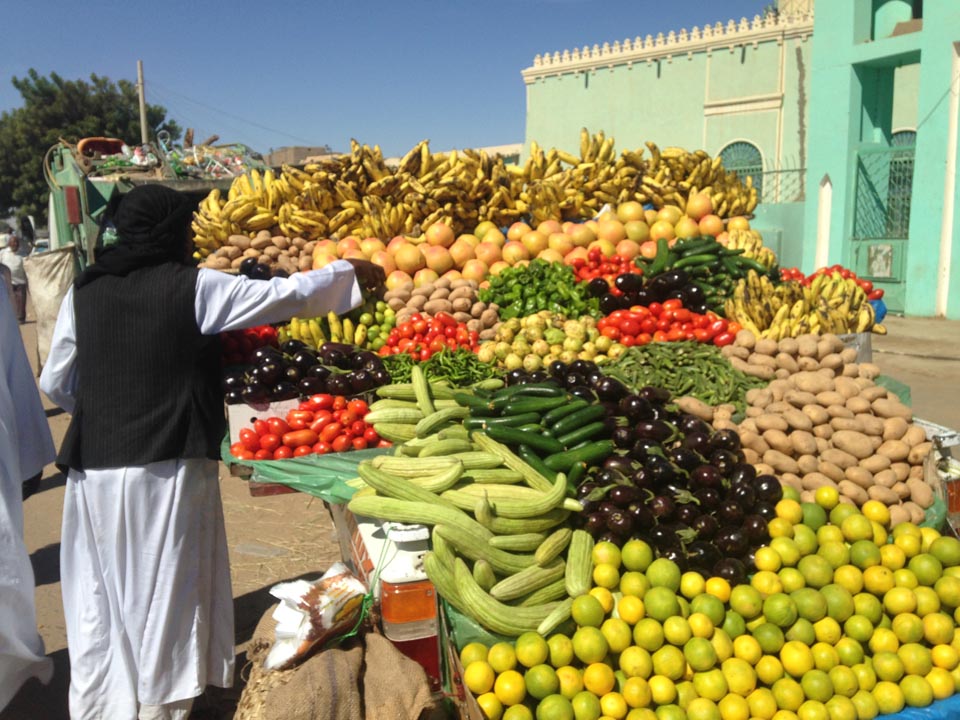 This journey used to take a full month by camel.  There is now a paved road all the way to Egypt. 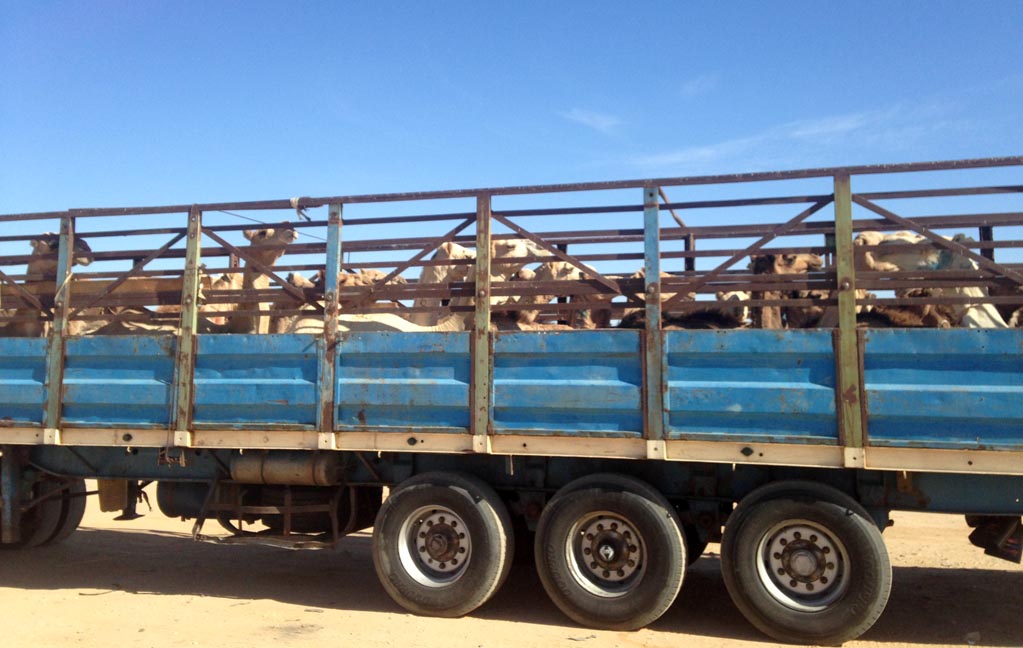 Our destination is Soleb, where there is a temple of Amun.  Built by Amanhotep III (New Kingdom, 14th century B.C.), it is a smaller version of the one at Luxor in Egypt.

We stay in a traditional Nubian house, which is sort of like indoor camping except warmer.  The basic layout is a central courtyard ringed by individual rooms; a large house may have more than one courtyard.  An outer wall surrounds the entire enclosure. Ornate and colorful gates are a distinctive feature of Nubian architecture.

We arrive in time for sunset. 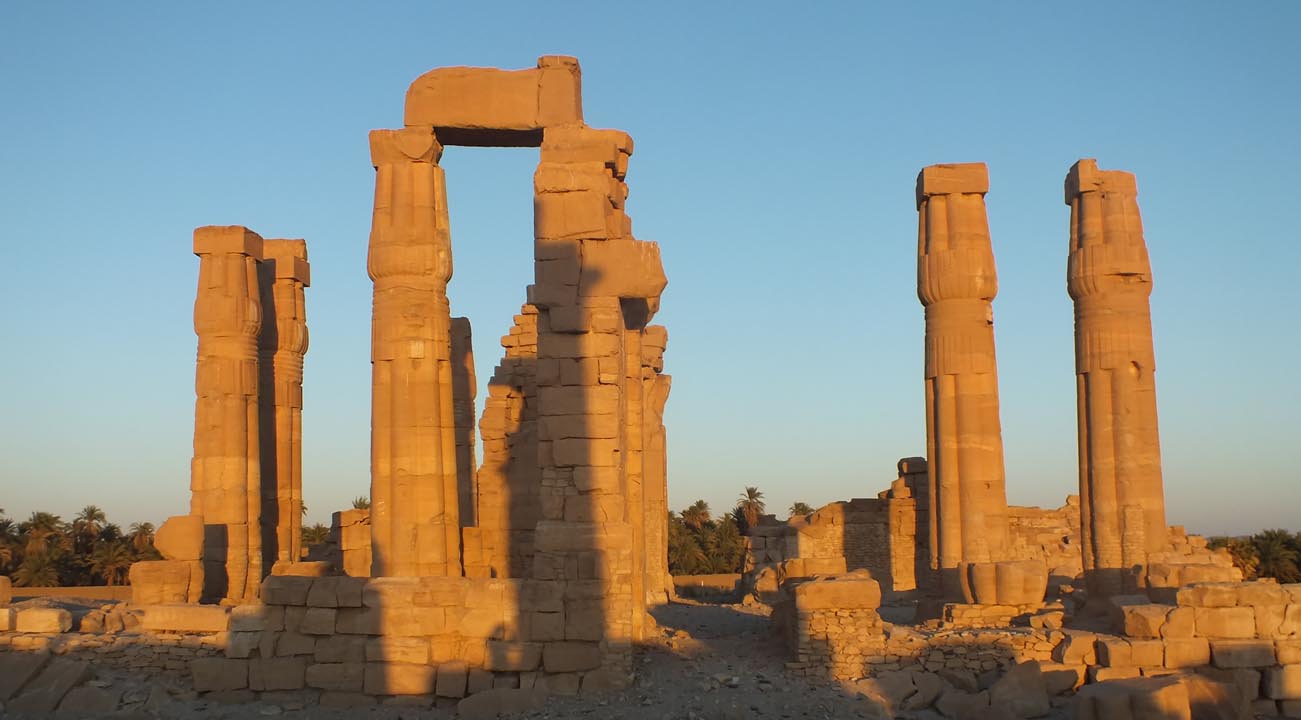 I arise early to catch the sunrise.

A bit further down the Nile is a rock chapel carved into the mountain by Tutmoses III. It served as a guard post to keep an eye on this section of the river.

Next stop is a small temple to queen Tiye, wife of Amenhotep III.  There’s not much left to see. 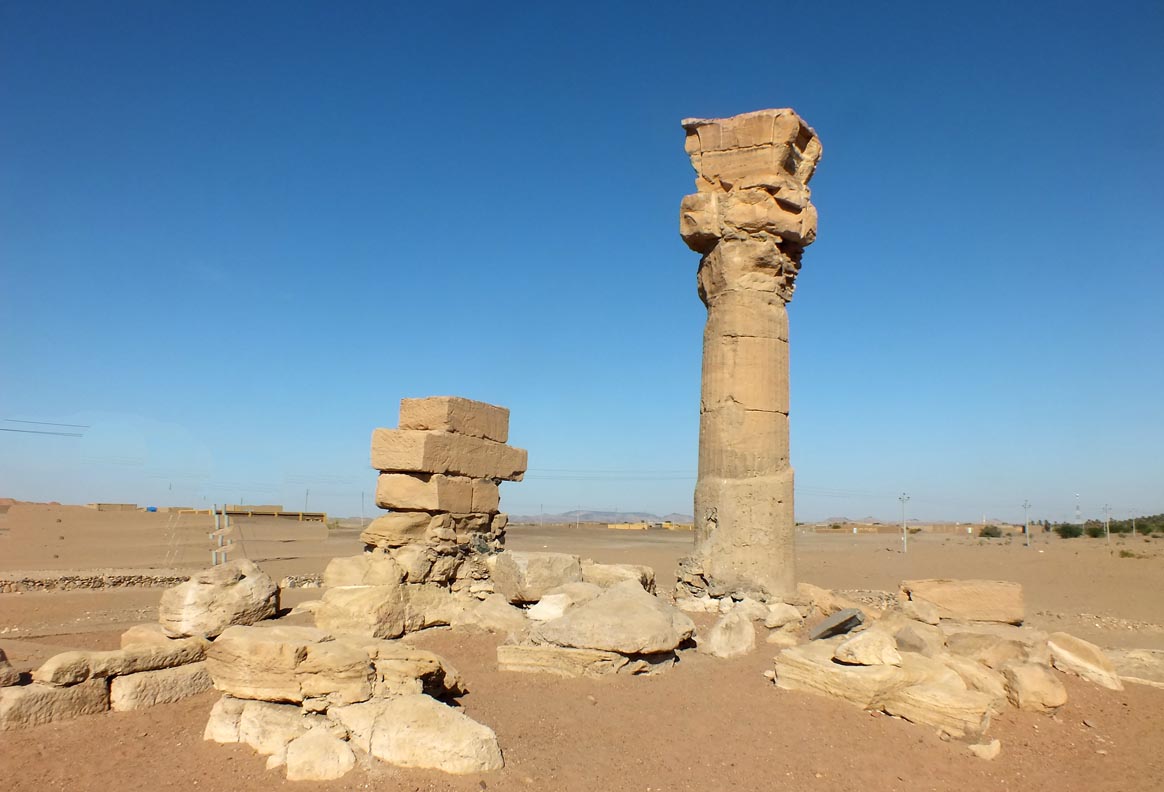 Adjacent is a cemetery in which the the individual graves are marked by small mud pyramids. Most are badly eroded.  A French archeological excavation is underway, but they are not finding anything -- everything was long ago looted.  As the director of the dig observed, putting a pyramid over a burial site was the equivalent of erecting a sign saying “dig here for treasure.” 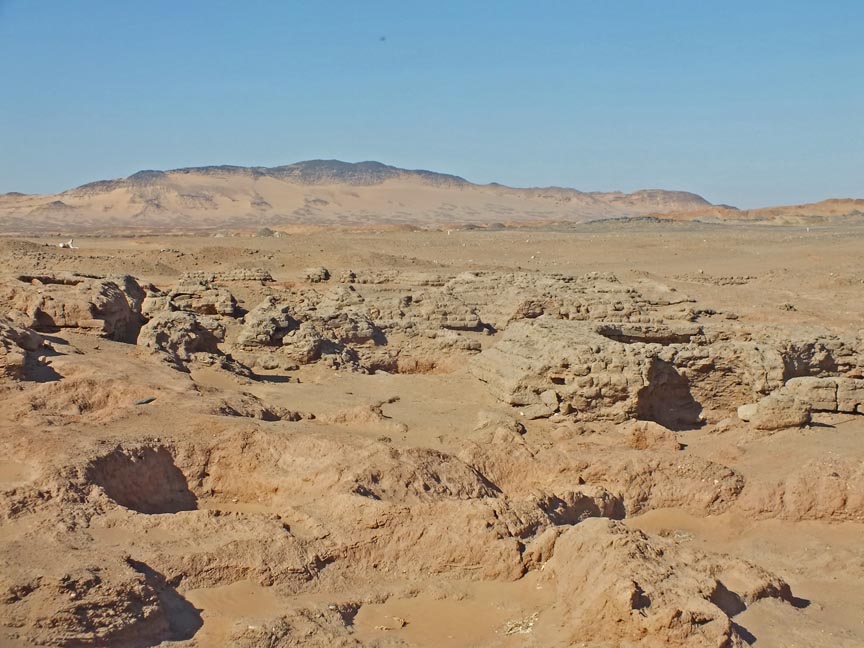 Not far is a temple built by Amanhotep's son, Akhenaten, the heretic king. Only fragments remain.  Later inhabitants tended to view these ancient structures as a convenent source of building materials; for the missing pieces, check the nearby villages.

We have reached the furthest point north in our journey and are heading back south.  We cross the Nile by ferry and drive to view the Third Cataract.  The Nile is freely navigable from its mouth at the Mediterranean to the First Cataract at Aswan, where boulders and small rapids prevented passage except in flood season (the Aswan Low Dam submerged it in 1902). The building of the Aswan High Dam submerged the Second Cataract beneath Lake Nasser (as it is called in Egypt; in Sudan, it's known as Lake Nubia).

From there we continue to the village of Tombus.  Granite along the river bank here has been quarried since the Old Kingdom (the time of the Great Pyramids of Giza, two millennia before King Tut). Several of the huge boulders bear inscriptions, one of which reads: “We come from the north with a powerful army; the eye of Horus sees all so do as we command and don't complain.”


Overnight is in the village at another Nubian house. A feature of desert hospitality is placing large earthenware vessels outside ones gates to offer water to passersby.  The bottom half is unglazed, keeping the water cool by slow evaporation through the porous clay. 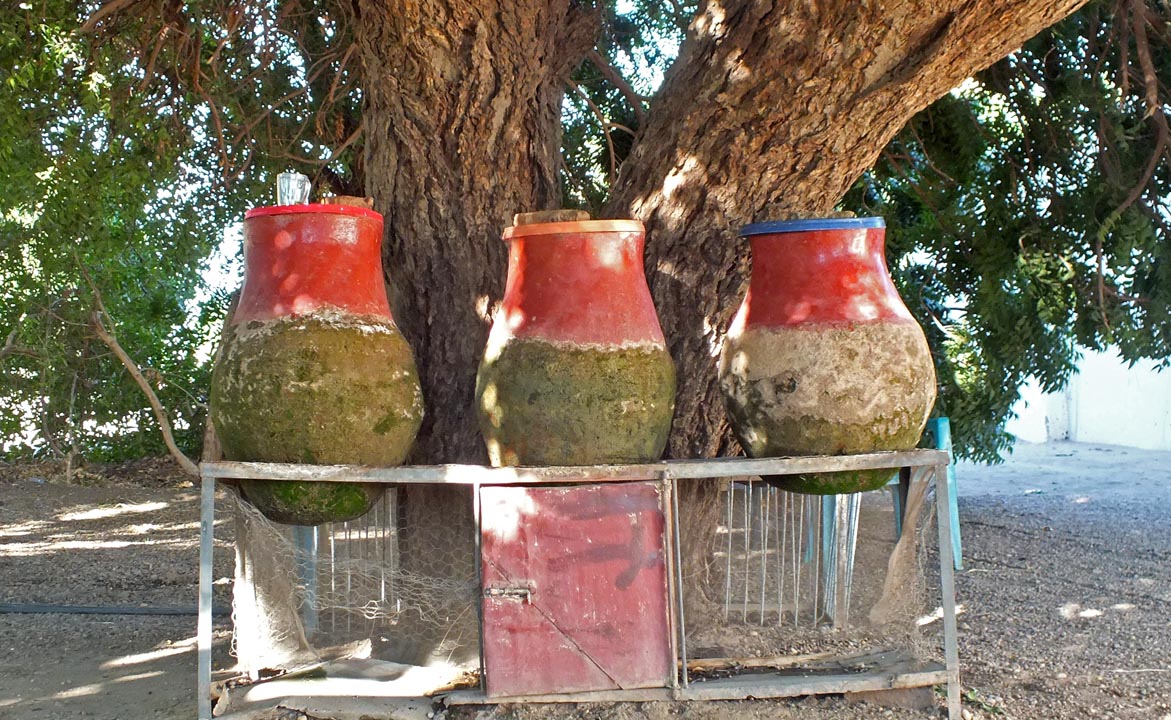 Thence to Kerma, a once-important town.  From 2500-1500 BC it was the capital of the Kerma Kingdom.  In what was once the center is the Deffufa, a huge mud-brick something that is the oldest surviving structure in Africa south of Egypt.  Surrounding it are the excavated foundations of what was an extensive complex. An adjacent museum contains artifacts all the way back to Neolithic times, including a cache of seven statues of Pharaohs of the 25th Dynasty.

Our day ends in Karima, where a nice, modern, comfortable hotel awaits.  But there is still time for a couple of site visits.

The Makurian monastery at Al Ghazali, founded by the Makurians, was an extensive complex.  It has been partially reconstructed, but all there is to see is foundations and partial walls. 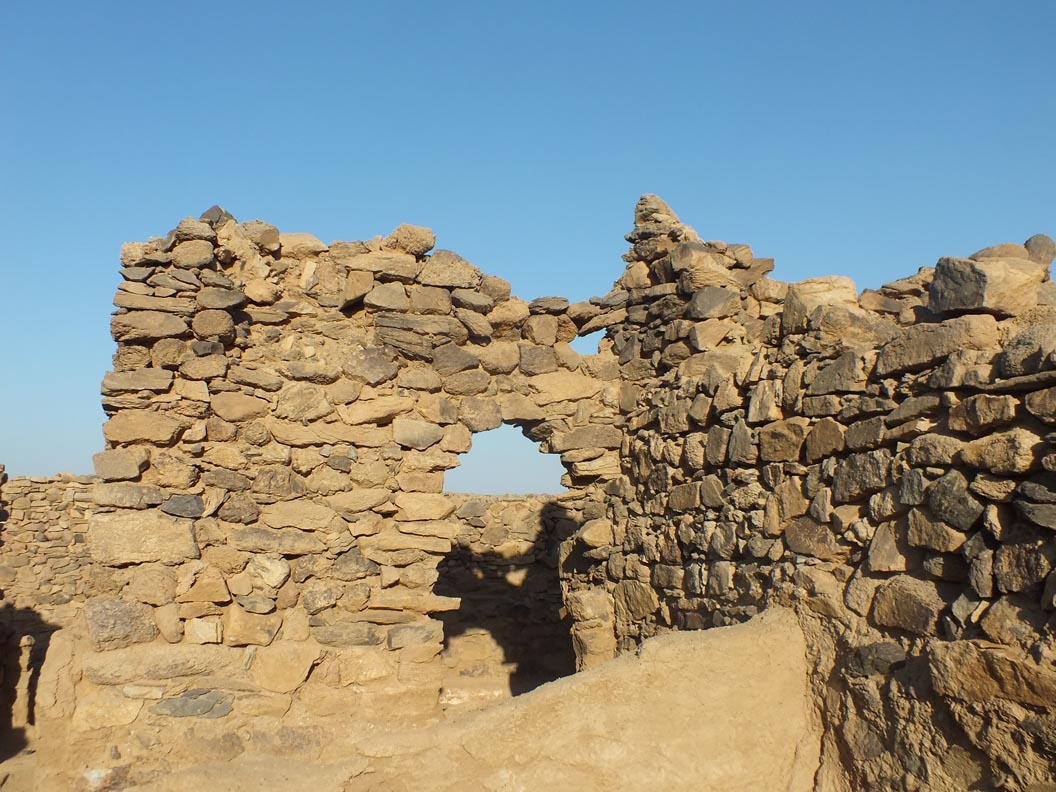 Around 850 BC Kush (basically, southern Nubia) invaded Egypt and conquered Thebes (Luxor).  The king declared himself pharaoh and founded the 25th Dynasty.  With the zeal of the newly converted, the Kushites went whole-hog Egyptian, adopting their writing system and gods.  The Egyptian pharaohs had long abandoned building pyramids in favor of underground tombs in the Valley of the Kings, but the Kushites revived the practice.  The earliest ones are at Nuri.

In the morning we cross the Nile by small boat to visit Kurri, another pyramid locus. There is not much left above ground but one of the underground burial chambers is open to visitation.

Jebel Barkal (literal translation: "holy mountain") is a large sandstone bluff overlooking the third locus of pyramids. At its base are the ruins of the Temples of Amun and of Mut.  From here – it was then called Napata – the Nubians pharaohs ruled Egypt.


If you are tired of seeing rocks shaped into squares and stacked atop each other, in the desert a short drive from Karima are ones shaped like trees.  No need to go all the way to Arizona to see a petrified forest -- there is a perfectly good one right here in Sudan.  Even better, there aren't any pesky park rangers to keep you from helping yourself to souvenirs.  They have been lying here for three million years, and I suspect that, between sparse tourism and complete lack of interest by locals, the forest will be here for a long time to come.

On to Meroe!  First stop is the Royal City, a vast area of excavated foundations, including a Roman-style bath.  Not much to see here.

Not so the nearby pyramids, the most iconic tourist site in Sudan.  It's also the most popular, due in no small part to the fact that it can be visited in a day trip from Khartoum.  The usual itinerary involves an early morning departure, arriving in time for the hottest part of the day, and leaving while the sun is still blasting.  (Makes for lousy pictures too.)  When we arrive in late afternoon we have the place to ourselves.

The Kushite capital was moved south from Napata approximately 280 B.C.  The pyramids were built in the following three centuries as grave markers of the Meroic kings and queens. They are the youngest pyramids, closer in time to our own era than to the great pyramids at Giza in Egypt.

In 1834 an Italian adventurer knocked the top off one and found treasure.  He proceeded to destroy the tops of all the others in a fruitless attempt to find more. A few have been rebuilt.

What's a pyramid visit without a camel ride?  We take the standard circumambulation and continue on over a rise to our campsite.  As you can see, it's not overcrowded.  The setting is magnificent.

I get up early to watch the moon set behind the pyramids.  It's Thanksgiving Day and a full moon to boot.  The temperature at night is much more pleasant than it was further north. 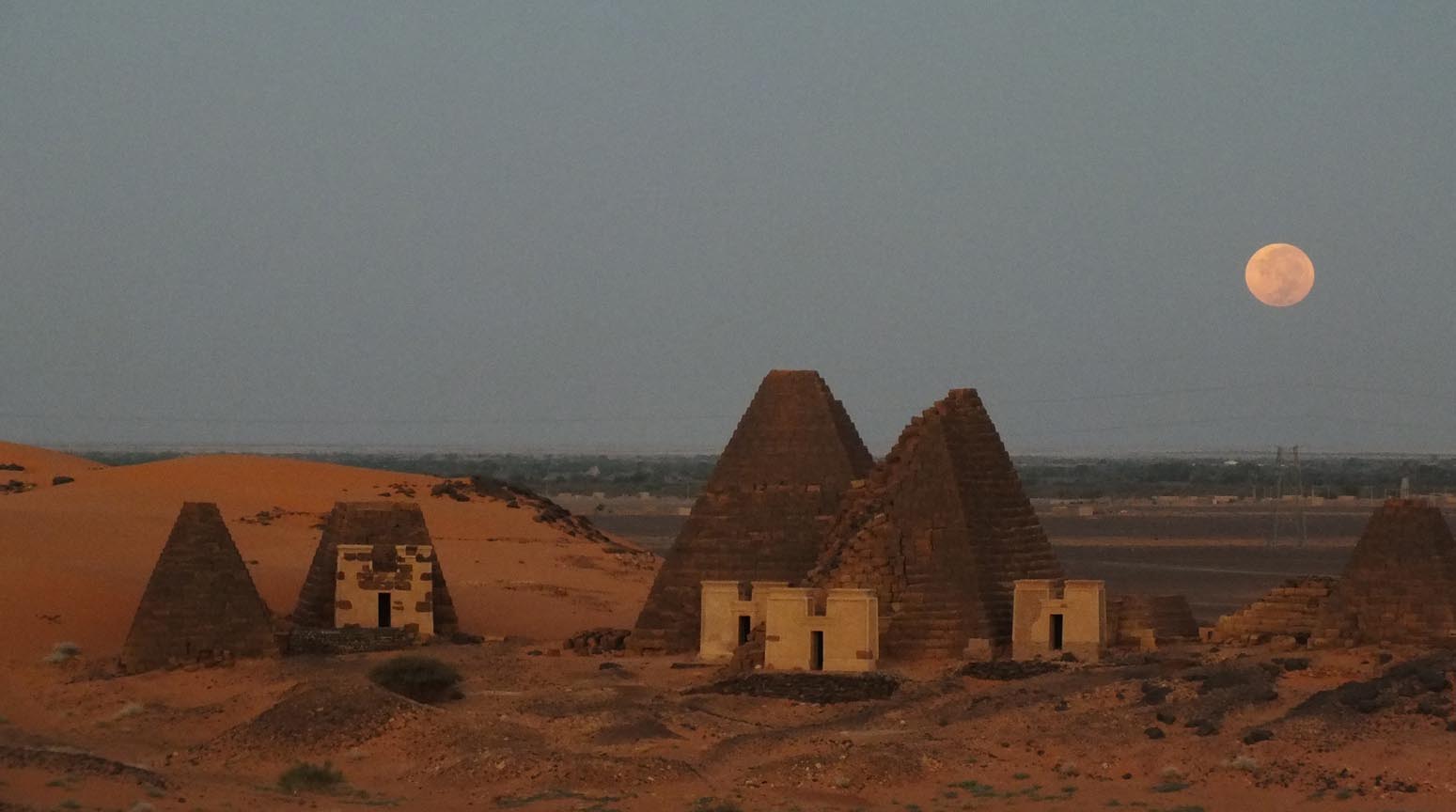 The rising sun casts a rosy glow.  There is not another soul in sight.

After breakfast we explore the pyramids more closely.  Each has an attached chapel facing east, some of which still contain inscriptions. We leave before it gets hot and before anyone else arrives.
On the road south we turn off to Mussawarat to see what is know as the Great Enclosure.  Its purpose is unknown, and it is mostly ruins.  Nearby is the Lion Temple.
We continue on to the Nagaa archeological site.  Two things here: a Temple of Amun and another of Hathor, the latter in Roman style.
Another night camping in the open desert before completing the drive back to Khartoum.  We stop at the Sixth Cataract for a boat ride and a delicious fish lunch. 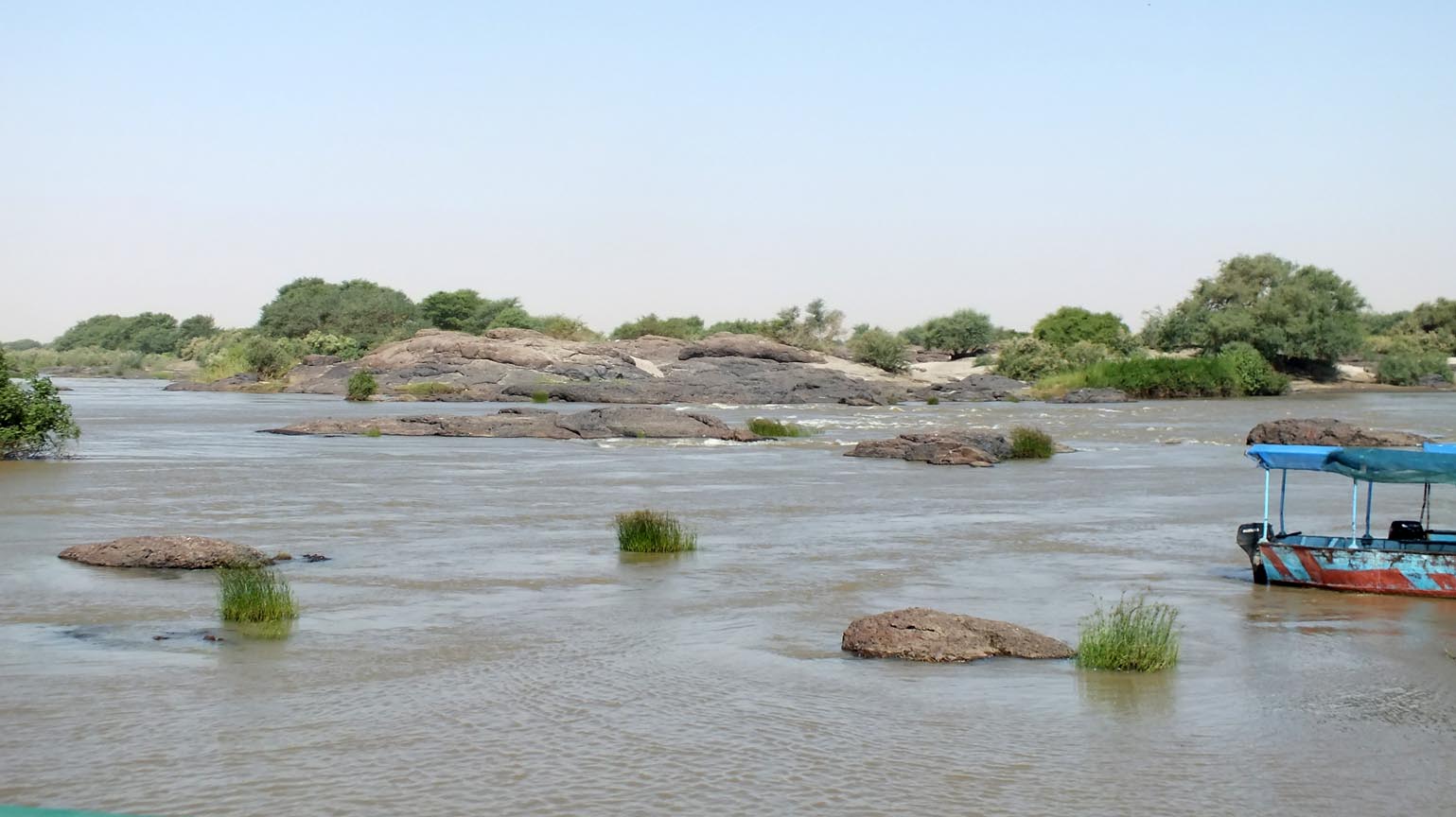 We reach our hotel in the early afternoon.  Unfortunately, we only have a matter of hours to clean up and repack before leaving for a farewell dinner and a 1:00 AM flight.  Goodbye Sudan. Libya, here we come!