I arrive at night at the the capital, also called São Tomé. My friend, Agustin de Mexico, is seeing what Angola has to offer and will be arriving in a couple days. I spend the next day taking in the city sights. The cathedral is the oldest in black Africa.  The governor’s mansion is now the presidential palace (no photos allowed except for those I sneak). The nicer colonial buildings are now foreign embassies. 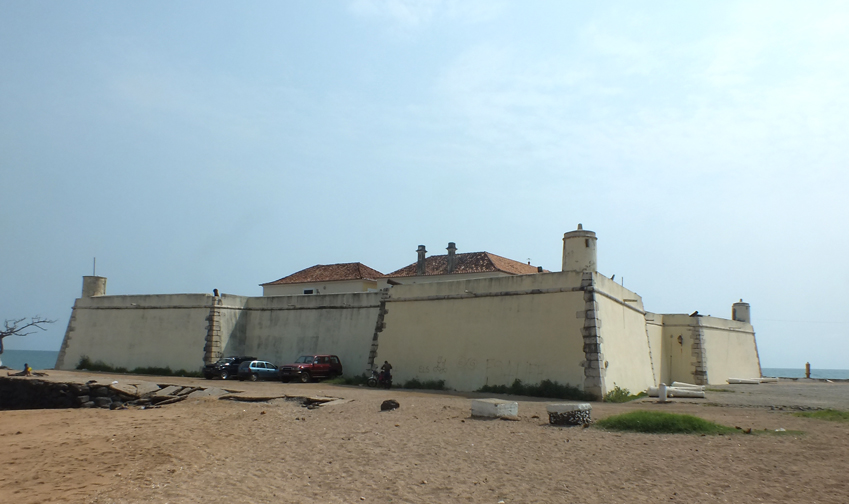 There are five flights a week on a smallish turboprop between São Tomé and Príncipe. On Day 3, I head back to the airport for the short (100 mile) flight.

Santo Antonio is a small city indeed, the population of the entire island being only about 5,000. It doesn’t take long to see it all. This place is poor! They solved the problem of colonial exploitation by getting rid of the colonists.  In doing so, they also got rid of the functioning economy. Vegetation envelops skeletal commercial buildings,  The movie theater is long abandoned. (Unfortunately, the best photo op -- a bank façade completely overgrown by strangler figs -- is no more.) There are a couple of food shops selling mostly tinned fish, rice, candy, sugary drinks, beer, and liquor. A bakery has only plain rolls. The market offers scrawny garden vegetables and a few sorry fish.

The only buildings in decent shape are the former sub-governer's palace and a couple of churches.

I have hired the guy who brought me from the airport (who speaks a smidgeon of English and a bit of Spanish) to drive me to four roças (plantations). The paved road ends at the edge of town. 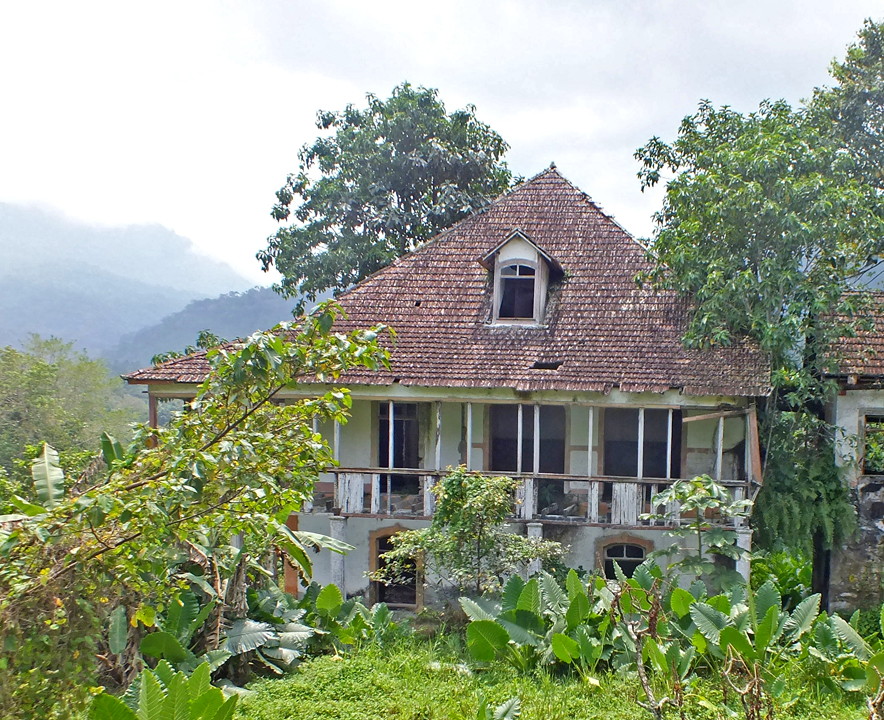 Roça Sáo Joaquim is even more stark.  The rich volcanic soil that has not reverted to jungle is carved into tiny plots used for subsistence farming.  Naked children play in the dirt.  The big house is used as outhouse.  This could be Mississippi in 1880, with former slaves scratching out a living in the shadow of the burned-out plantation manor.  No problem of exploitation here.

Roça Sundy was the biggest plantation on Príncipe.  Currently it is being restored/rebuilt (with foreign money) as a luxury tourist accommodation, so it does not have the air of desperation elsewhere.  There is a trailer office full of europeans and outside local laborers are (sort of) at work on the construction project.  Around them are the ruins of the stables, a chapel, and a large hospital.  Tracks from an internal railway system still snake between the buildings.

I am eager to see Roça Belo Monte, which has been restored as a luxury guesthouse.  As we reach the gate we are turned back by soldiers: the house and grounds are closed.  El Presidente has decided to visit. (So I don’t have any photos of the "nice" Príncipe.)

There is still time to walk all the streets of Santo Antonio several more times before sunset. I do not see any restaurants or even prepared food for sale; good thing my lodging also serves dinner.  There is no menu -- only one thing is on offer. Luckily it’s fresh fish.

One full day is plenty.  I am on the next morning flight back to Sáo Tomé. Agustin does not get here until tonight, so I spent the relaxing by the pool at my guesthouse. 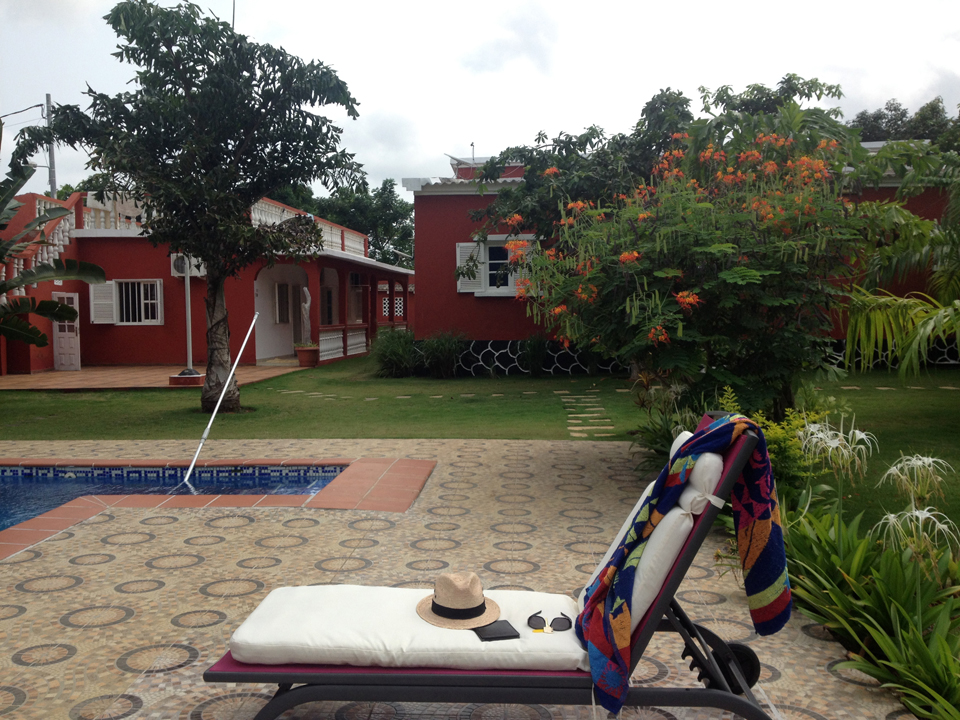 Agustin arrives. We hire a car and driver to visit the north part of the island.  Scenic coastline (with more shipwrecks) and BIG trees.  Giant crabs for lunch at a fishing village.

The roças here are not quite as dire as on Princípe.  They have been taken over by the government and are still producing (sort of). Attempts are being made to brand the cacao beans for the upscale and organic markets.  The largest roça has renamed in honor of Agostinho Neto, the late Angolan communist leader.  The shell of the hospital overlooks the decaying buildings of the plantation.

It’s Agustin’s turn to do Principe.  With the spadework already done by me, his row is easier to hoe.  He is luckier in that he is able to tour Belo Monte. While he is gone, I take a closer look at Sáo Tomé city.  The shops display imported goods at high prices.  There is a dearth of fresh food or meats, although I do see a bin of small, mealy apples from Portugal.

On our final day we drive south. The warehouses at Roça Água Izé sport a coat of fresh paint, although the rest of the buildings look about as expected.

Views of Pico Grande, a vocanic plug that is a tropical version of Wyoming’s Devil’s Tower.

It’s laundry day, be it the beach, riverbank or waterfall.

It's been a week for me.  I board the plane back to Accra and then New York. Agustin, on the same plane, is continuing on to Lisbon and then Madeira.