Paraguay is one of the least-visited countries in South America – for me it is the penultimate, only the big enchilada (Brazil) left to go.  I’ve given myself a week to check it out.

You can’t fly direct from the US; for me the stopover is Lima.  The arrival time in Asuncion, the capital, is not so convenient either: 2:00 AM.  At least it’s a traffic-free drive to my hotel, the Asuncion Palace in the heart of downtown.  A former palace built in 1843 it well-maintained and somewhat restored – I would call it shabby chic.

A little bit of geography: along with Bolivia, Paraguay is one of two countries on the continent without a coastline.  However, it is not landlocked: 800 miles downstream is Buenos Aires.  Ocean-going vessels serve the port of Asuncion.  The Plate, Parana, and Paraguay rivers gave the Spanish their only water route to the interior of the continent (the Amazon being controlled by the Portuguese).  The conquistadors arrived in 1524 and founded Asuncion in 1527.

And a little bit of history: the story of Paraguay is one of intermittent wars and continual dictatorships.  The country shrank to its present area (about the size of California) in the mid 19th century after a losing war against Brazil, Argentina, and Uruguay. In modern times the country was under the thumb of General Alfredo Stroessner, whose  dictatorship was exceeded in duration only by that of Kim Il Sung in North Korea.  Only since his overthrow in 1989 has there been a multi-party system of government.

I spend my first morning resting up and the rest of the day on a walking tour.  Asuncion does not have a great many sights – my principal impressions are of murals and decayed elegant buildings amid scattered modernistic ones.

The National Pantheon of Heroes, a mausoleum for generals and dictators, is a small-scale copy of Napoleon’s Tomb.

The remains of a statue of Gen. Stroessner is symbolically crushed beneath a block of concrete. 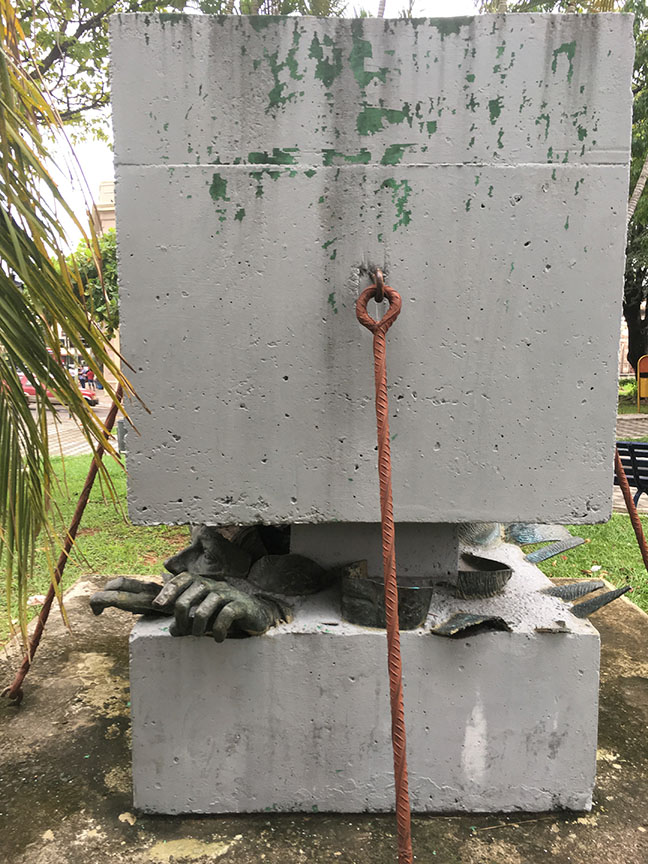 A bit beyond walking distance is a statue of Chang Kai Shek: as the only country in South America that still recognizes the Nationalist Government of China (Taiwan), Paraguay has been a beneficiary of its foreign aid largesse.

Facing the river is the Government Palace. The surrounding area is blanketed with police, guards and heavily-armed soldiers to shoo away the inquisitive, but, there being none save me, they just stand around looking bored.  Thanks to modern technology, they no longer need to stare vacantly into space with only cigarettes for entertainment; now, they are all playing with their phones. 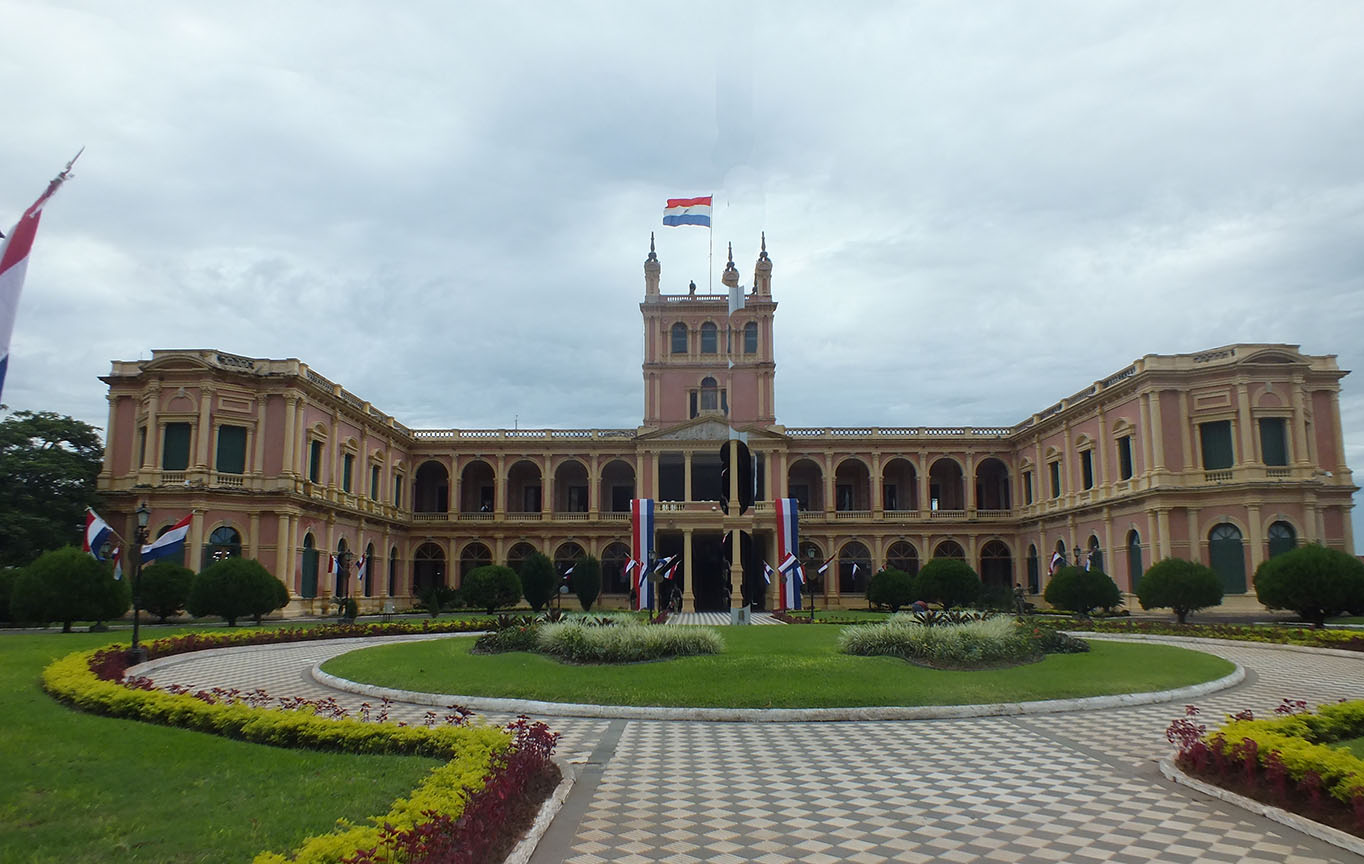 The Palace is flanked by parks and plazas, now crammed with plywood shanties.  These are not protesters or migrants from the countryside; they are city residents whose nearby riverfront neighborhoods have been inundated by seasonal floods.  They are given building materials to construct temporary housing; in two months time, I am told, they will be gone.  I find it curious that they are not shunted to a less visible location. 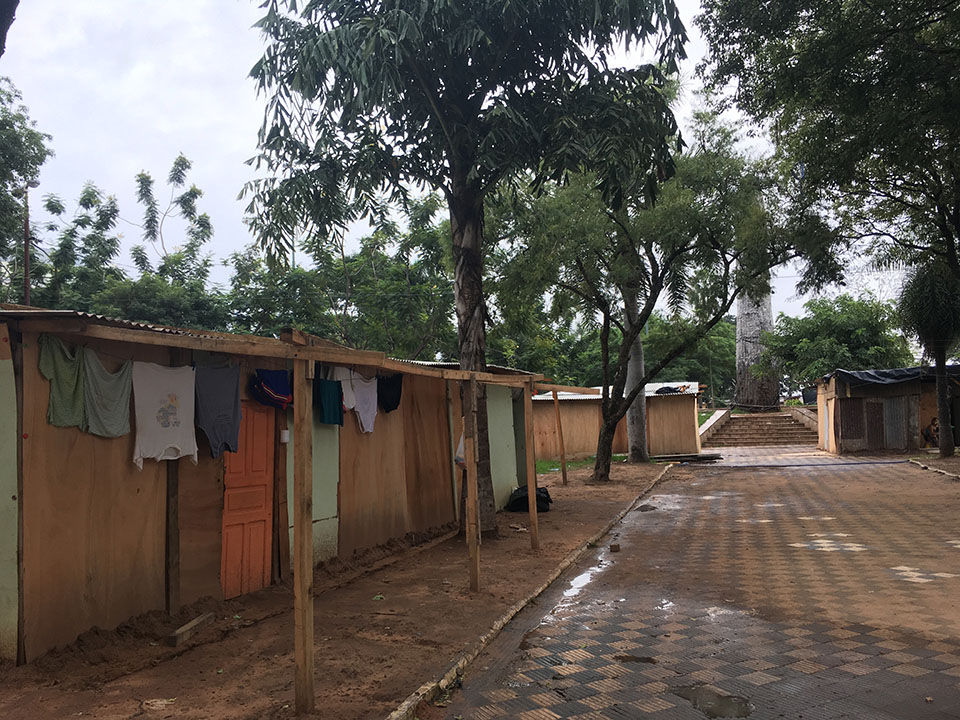 The first railroad in Paraguay was built in 1861.  The central station is the oldest in South America (a claim also made – inaccurately – about the railway itself).  It is now a museum.

I have hired a guide for the next four days to take me outside the city and to the south.  Before leaving Asuncion we take look at the low-lying areas under floodwaters.

Unusually, there is no sister city across the river.  On the opposite bank begins the Chaco, the sparsely-populated semi-arid lowlands that comprise two-thirds of the country’s land area.  In the 1930’s the Chaco War pitted Paraguay and Bolivia in the greatest conflict in the western hemisphere of the 20th century.  This time of year its unpaved roads are inaccessible so I will not be visiting it at all.

The tourist board has designated a group of towns near Asuncion as “The Golden Circuit.”  The first is Luque, the home of the city’s airport and nothing more than a suburb.  A bit further out is Aregua, known for its colorful and whimisical pottery.  Interesting, but nothing one can bring back on a plane.

It also has an attractive church overlooking Lake Ypacarai. 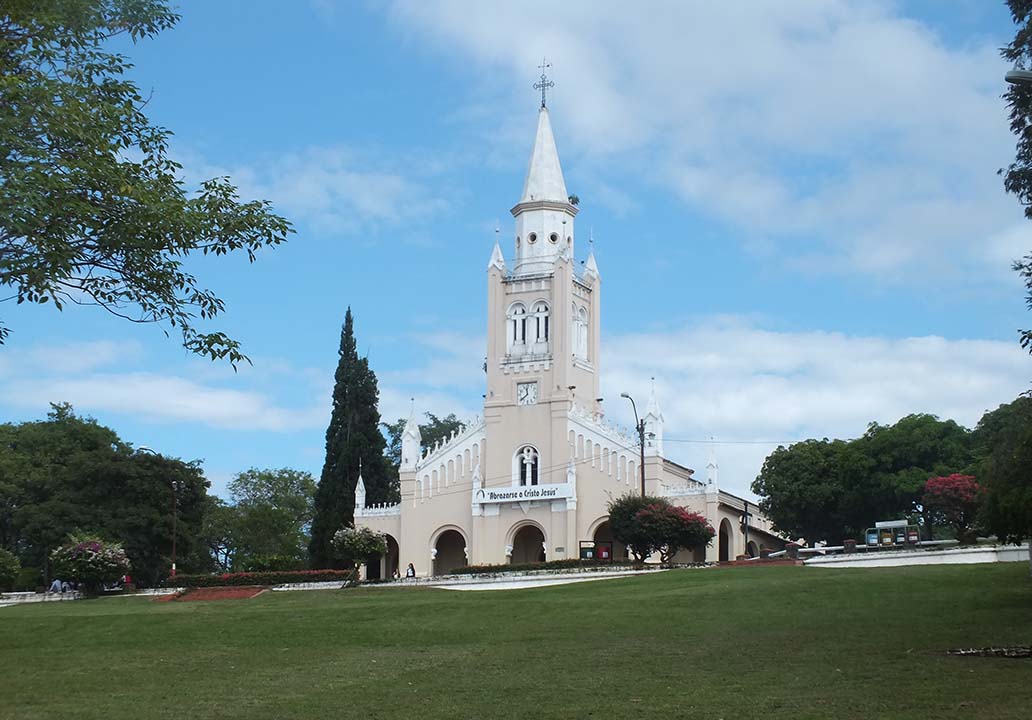 The highlight of the circuit is the 17th century church at Yaguaron. The elaborate wooden carvings and decoration showcase the style and artistic talent of the native Guanari Indians, whose descendants comprise the bulk of the country’s population.

The Guanari language is on parity with Spanish and the eponymous unit of currency.  (Fun fact: as a source of botanic and animal taxonomy, Guanari is second only to Latin.)

Paraguay has been the object of several waves of European migration, most notably of Germans beginning the in 19th century.  They initially settled in the lakeside town of San Bernadino, where I check into the historic Hotel Del Lago.

In 1879 Elizabeth Nietzsche (sister of Frederick) and her ultra-racist husband, Bernhard Forster, founded Neuva Germania deep in the jungle.  Intended to be a model settlement for the master race and the basis of a new German empire, the colony was a failure.  He committed suicide in the hotel and is buried in the town’s German cemetery.  Elizabeth went back to Germany and was later lionized by Hitler.

During the 1930’s Hitler furnished schoolbooks and propaganda to a very supportive German community.  Swastikas were everywhere and a large portrait of der Führer hung in the hotel’s dining room.

Headstones in the cemetery proudly denote those who returned to Europe to fight for the Fatherland.

Prior to succumbing to US inducements to nominally join the Allies in 1944, Paraguay was unabashedly pro-Fascist.  (The police chief of Asuncion christened his son “Adolfo Hirohito.”)  After the war wanted criminals and lesser Nazis found refuge and protection in the numerous German settlements here and to the south. 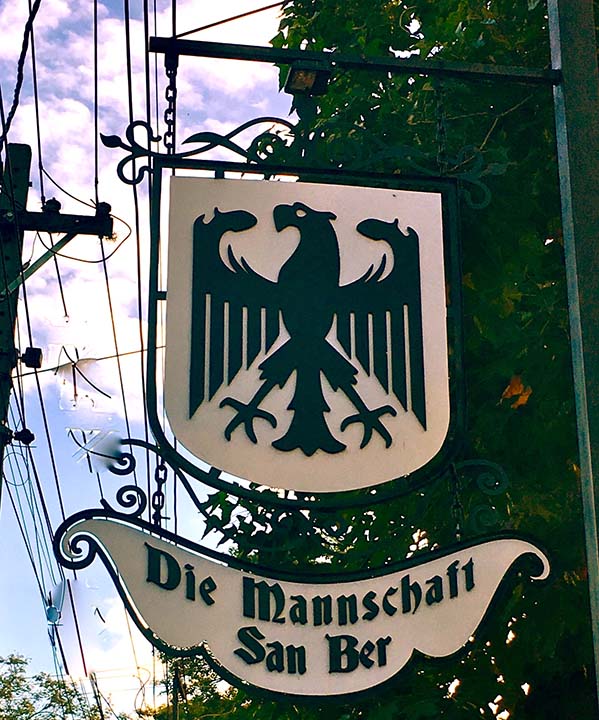 Dark history aside, the hotel is a gem, a restored teutonic fantasy. San Bernadino is a summer weekend retreat for the affluent of Asuncion. It being mid-week and out of season, the hotel (and the rest of the town) is empty.

The next day we continue south.  We visited the railway workshop at Sapucay, a train-buff's delight.  The 19th century steam-powered, belt-driven, heavy machinery has been preserved as a living museum.  As I am the only visitor, nothing is in operation.

We stop at Villarica for lunch.  Founded in 1570, three centuries later it became another hub of German immigration.  The Nazi party of Paraguay was formed here in 1927.  Our restaurant serves excellent schnitzel.

The weather has been iffy since I arrived.  Each day has been overcast with rain threatened.  In the afternoon, the downpour begins and persists the remainder of my trip.

The principal tourist/historical attraction of Paraguay are the ruins of the Jesuit missions in the south.  The order had a substantial presence and impact on the Guanari, converting them and providing protection from Portuguese slavers from nearby Brazil.  (The story told in The Mission, starring Robert DeNiro and Jeremy Irons, is fictional but based on history.)

The first one I visit is at Jesus de Tavarangue.  Construction began in 1758 and was abandoned nine years later when the Jesuits were expelled from the country.

The biggest is Santisima Trinidad del Parana, a/k/a Trinidad.  As usual, I am the only visitor.  I would have traded solitude for a bit of company if it meant that it would stop raining.

A third is San Cosme y Damian, the site of the first astronomical observatory in the southern hemisphere.  Most of the buildings are still in use. The sundial in the courtyard is original.  It is still raining.

We make a flying visit to Encarnation on north bank of the Parana River that forms the southern border of Paraguay.  It is a summer resort and a commercial gateway to the much larger city of Posades across the bridge in Argentina. Seemingly out of place are the onion domes of a large Ukrainian Orthodox church built by post-war immigrants.  Other immigrants groups include Mennonites, Japanese and Taiwanese; each group tended to settle in distinct ethnic enclaves in the vicinity.

I stay at the Hotel Tirol, a comfortable retreat set in the jungle just a bit more than ten miles north of the city.  A previous guest, as revealed by his Paraguayan identity card, was one “Dr. Jose Mengele.” After Adolf Eichmann was captured in Buenos Aires, Mengele decamped for Paraguay, where he worked on a farm in the German settlement of Hohenau. He subsequently moved further north to the vicinity of San Bernadino where he was known as "Dr. Fritz".

Unconfirmed is the former presence of the even more notorious Martin Borman, Hitler’s deputy. It is rumored that he escaped to South America and found refuge under Stroessner. Although his skull was unearthed in Berlin in 1970, there is credible evidence that it came from Paraguay where he is said to have died in 1959.

Day four we drive back to Asuncion.  The rain has gotten even worse.  On the way we stop at San Ignacio, the oldest of the Jesuit missions and where there is a museum of religious art and artifacts. It is closed.  It seems that the inclement weather has disuaded the caretaker from opening up for visitors.

What should have been a six hour drive takes all day.  Due to congestion we leave the main highway.  The storm has passed through, leaving trees down and towns without power.  We do not reach Asuncion until the early evening.

My last two nights are at the Gran Hotel del Paraguay. During the glory days about 150 years ago the Irish mistress of El Presidente built a luxurious retreat in the wilds beyond the city.  The city has enveloped the former villa, but within its walls and courtyards the lush foliage remains.  The hotel is elegant and intimate.  Florid original murals grace the walls and ceilings of the former ballroom and salon – now dining and event rooms. 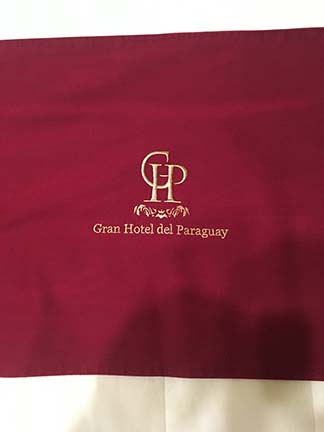 I decide to spent the last day in the confines of the hotel, even though the wet weather prevents me from enjoying my capacious private balcony. And a 4:00 AM flight to Lima means I will miss one of the sumptuous included breakfasts.  The upside to my pre-dawn departure is that it is still afternoon when I land in Orlando.