Papua New Guinea, or more simply “New Guinea” or “PNG”, is one of the most exotic destinations readily accessible to tourists.  Although not legally required, signing up for an organized tour is a practical necessity.

It is helpful to start with a bit of history and geography.  Lying north of Australia and just below the equator, the island of New Guinea is the second largest in the world (behind Greenland), but it is deceptively small when viewed on most flat maps that over-depict the polar regions.

The western half was colonized by the Dutch.  Known initially as Dutch New Guinea, then Irian Jaya, then Western Papua, and now simply Papua, it is now part of Indonesia.  I visited there in 2009.

The northeastern quarter of the island was colonized by the Germans and was known as German New Guinea.  Settlers from the British colony of Queenland (now one of the states that comprise Australia)  claimed the southeastern quarter, calling it Papua.  Following its defeat in WWI, Germany was stripped of its colonies, and Australia was given administrative authority over German New Guinea.  The two colonies were merged after WWII, and, in 1975, became independent.  Due to an impassible mountain range, the only connections between north and south are by air or sea.

The inhabitants thoughout the island are of the same Melanesian stock, but its extremely rugged geography has resulted in an amazing cultural and linguistic diversity. New Guinea is home to some 2000 languages – one-third of the world total – many as different to each other as Chinese is to English.

On a single visit one cannot realistically visit more than a few locales.  I have chosen a tour that combines the Sepik River region with a highlands cultural show. 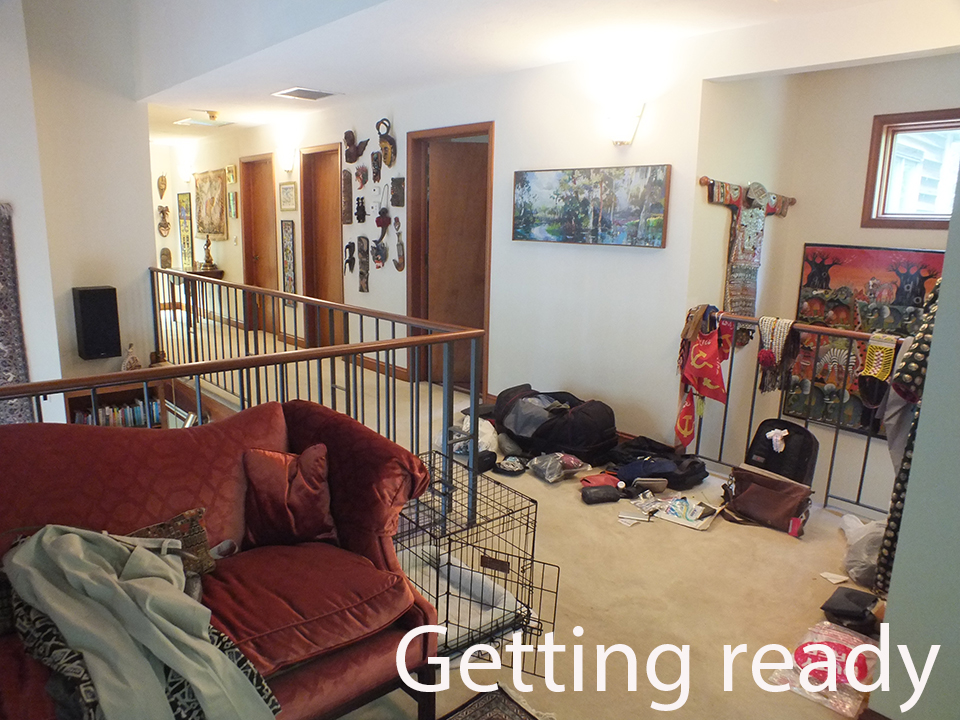 It’s more than a hop and a skip to get there.  Jacksonville to Atlanta, then Los Angeles, then the long haul to Brisbane, then Port Moresby, and finally Wewak.  Leave on Monday, arrive Thursday.  Straight through, except for an overnight layover in Port Moresby.

Port Moresby is the capital of PNG.  Nothing to recommend it except decent hotels.  The one I choose has its own aviary.

The flnal flight is to Wewak, on the north coast.  Gateway to the Sepik River region, it is small city of 2,000 that has stores, banks, medical facilities, and a comfortable hotel.  Men living in the interior regions might make it to Wewak only a few times in their lives and women likely never.

We meet up for the tour at dinner.  I get into the local vibe by ordering sauteed crocodile – pretty good, much better than the gator fritters served to tourists in Florida. We are five: a guy from India, a Londoner living in Singapore, a gal from Barcelona, a Los Angeleno, and me.  A couple of tables over is a group of short-haired, youngish American men – they are a team sent by the Pentagon to search for remains of American airmen still missing from WWII; the Japanese government also sends recovery teams to look for their war dead.

In the morning the trip gets under way.  We drive to the river, some 100 miles and 5 hours from Wewak.  The road, such as it is, ends at a rough and tumble village named Pawgi where we board long dugout canoes.  No paddling required: ours are equipped with outboard motors, meaning the journey takes hours instead of days.

The Sepik is the great river of New Guinea.  Along it and in its basin live hundreds of tribes.  Distinctive to the region are village spirit houses (Haus Tambaran, as named by the Germans) .  They are basically hangouts for the menfolk; women may not enter or even approach (a rule waived for foreigners).  Some tribes make them exclusive to men initiated as crocodile warriors.  Because nothing lasts in the humid tropics, the structures must be rebuilt periodically.  As missionaries make inroads against traditional animist religion, their number and significance are gradually waning.

Our first stop is at Korogu, a small village with a moderate sized haus tambaran.  In addition to being a men’s lounge, it also functions as a storefront for traditional crafts.  Masks, carvings, totems, you name it – all desireable but most too large to carry back.  Sales to passing tourists are pretty much the only source of cash in this subsistence economy.

We continue on to Kanganamun village, a sprawling  riverside settlement that boasts the oldest and largest haus tambaran in the region.

The guesthouse in which we bunk is the finest accomodation in the village.

The view from my bedroom window. 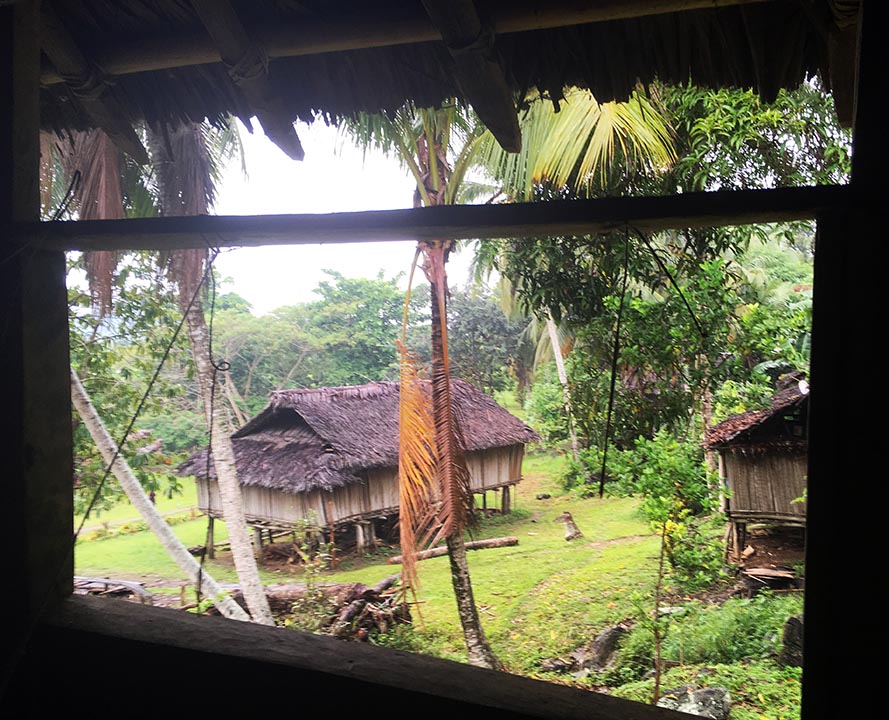 Rural life is not particularly exciting, and Kanganamun is no exception.  There is a nighttime croc hunt, which I skip.  (The catch: one baby croc.)

There is a demonstration on the laborious process of pounding the innerds of the sago palm into flour, a principal component of the local diet along with dried fish.  I taste it: edible, but am glad our outfitter has brought along sufficient provisions for the duration.

In the morning there is a hike inland to another village and its spirit houses, but I am somewhat mobility-impaired on this trip so skip that.  Another village, Kinindibit, is right on the river so little walking is needed to inspect the fine array of souvenirs on offer.

The itinerary calls for further expedition to a section of the river called the Black Pools, but unusually low water levels due to a drought has made the river impassible.  Instead, we return to Kanganamun for an unscheduled treat.

The East Sepik region is world-renowned for its “Crocodile Men.”  Based on the traditional belief that they are descended from crocodiles, young men undergo  scarification so that their skin resembles the hide of their mythical ancestors.  Initiates leave their families and are sequestered in the haus tambaran where they are instructed in tribal lore and life skills during the months-long, extremely painful process.  When they are ready, they emerge as full crocodile warriors.  The initiation ceremony only takes place every few years.  We are fortunate enough to be here when this crop of new warriors emerges.

At dawn we are awakened by music from flutes and drums from the haus tambaran.  The women approach the haus bringing food for the initiates, and the men, in traditional costume, dance out to ceremoniously accept it.  Females cannot enter the haus, and the intiaties remain hidden on the upper level.

On this, the final day of the initiation process, the newly-minted crocodile warriors emerge and are feted as they proudly display their scars.

Historically, the tribes of New Guniea were at constant war with each other.  In front of a haus tambaran are “blood stones” to which captured enemies were tied before being killed.  Traditionally, the supporting pillars of the haus are built over their skulls.  Christian missionaries endeavored to redirect tribal enthusiasm into a more benign outlet: a sing-sing in which rival groups gather in full traditional regalia for a festival of singing and dancing.  We are fortunate to be here for one.

About twenty groups have gathered for the sing-sing.  Some have paddled for days to get here.  For them, it is a respite from the everyday drudgery of subsistance living; for us, it is a photographic extravaganza.

The festivities continue until mid-afternoon.  The performers change back into their regular clothes (cast-offs you have donated to charity) and start their journeys back to their villages. They need to get going before fights break out. The people are very friendly to us, but to each other, not so much. Common traits are acute tribal loyalty, mutual antagonism, and a high affinity and low tolerance for alcohol.  The homogeneous villages are completely safe, but in the cities where diversity is high and jobs are few violence and property crime rates are sky-high.  More on that later.

After four nights of heat, humidity, camp food, floor sleeping, and no plumbing, it’s time for us to head back to civilization.  Back down to river to Pagwi. It’s election day, and the natives are restless.  With emotions running high, our guides want to keep us away from any trouble, so they park us on the other side of the river to wait for our transportation to arrive from Wewak.  Another five hours of bouncing and lurching on the semi-paved road brings us back to air conditioning, soft beds, modern plumbing, and fine dining.

The next day we begin the second part of the trip.  First, a flight back to Port Moresby, where the layover affords time to visit the National Museum.

Then a back-tracking flight to Mt Hagen, capital of the Western Highlands Province.

“Highlands” is a euphemism for “mountainous jungle.”  The tribes here are distinctive and quite different from those of the Sepik River region.  The annual Mount Hagen Cultural Show is one of the biggest tourist draws in the country.

The day before the big show is a mini-show in a village an hour into the hills.  It’s a good preview of what is to come and more intimate because we can mingle with the groups as they put on their make-up and costumes for their performances.

An important element of their headdresses are the feathers from birds-of-paradise, the national symbol of New Guinea.  Unique to the island the birds are supposedly protected, but are endangered due to poaching.  When it come to assembling their costumes, it is evident that the locals pay the law no heed.

The participants are happy to pose for photos.

That was the mini-show.  The following day is the main event, held in a large fenced field behind the airport. To my surprise and dismay, Bird-of-Paradise feathers and even freshly-poached birds are being sold openly.

The show is conducted a bit like the opening ceremonies at the Olympics: the various cultural groups enter the field in parade fashion behind a placards bearing the name of the group/village/tribe. It takes about an hour for all to troop in.

The reviewing stands are limited to paying tourists.  Locals can purchase cheap tickets that let them watch the show from the fringes.

After lunch we skedaddle. As the day wears on, inter-tribal tensions plus alcohol can turn the event into a "rock festival," i.e. stone-throwing.  The next morning, at breakfast, we hear the news: yesterday afternoon violence erupted and three people were killed.  The rest of the show might be canceled.  It takes a couple of hours before we get the word that the police consider the situation to be under control. Some of us have left at 5:30 AM to go hiking in the hills in search of live birds-of-paradise; I opt for a return to the show.

The second day of the event is pretty much a repeat of the first.  The number of tourists in attendance is considerably less.  Great!   Fewer white people with cameras getting in the way of my pictures.  Several of the local food stalls are burned-out shells, but otherwise there is no sign of tension. I visit the staging area where the performers are getting ready.

Also, as the show is closing, the vendors have come way down on their asking prices.  Although I have too much stuff already, I get more, including a painting I have been eyeing from the start.

In the afternoon I join the hunt for avian life.  The remaining birds live where people don't, so it's a long drive to reach their habitat. At a lodge in the hills that sets out fruit to attract them.  Several species put in an appearance, but the single bird-of-paradise remains half-hidden in the crook of a tall tree.  Unfortunately, my point-and-shoot camera is not up the task.

That’s it for this trip, as exotic as any I've done.  Getting home takes two days, overnighting in Brisbane.  Next visit, if there is one, will be to some of the smaller islands.