Every seasoned traveler knows that not all places can a be five-star destination: there are many lesser-lights (or, as an ex-president called them, “s***hole countries”).  But new places are new places.

The largest river in West Africa is the Niger, which flows through ten countries, including its eponymous nation, in a giant 2500 mile loop.  Niger is most commonly associated with 1) Nigeria, a neighboring but entirely separate country; 2) a famous limerick about a tiger-riding lady; and 3) a conflation of its name with a now-forbidden word (the French pronounce it “Knee-ZHER").  I am on an organized tour of it and its neighbor, Burkina Faso.

One gets to this former French colony through Paris, arriving late afternoon in the capital, Naimey.  In 2018 Niger was ranked as the poorest country in the world. Although in 2021 it has lost that dubious distinction, it remains firmly in the bottom ten..

The city has a population of just over a million, and the country overall about 24 million.  In the morning we take in its sights, such as they are.  There is the National Museum, some nice-looking buildings housing nothing interesting.  We are not allowed to photograph a sacred robe that could be tablecloth but in a nearby display case are some placemats that could be used as party hats.

Outside, in a protective cage, is what’s left of what was, until an army jeep ran over it, the last tree in the Sahara.

A shed contains a couple of very impressive skeletal examples of the type of wildlife that lived here prior to global warming.

Also on the grounds is the national zoo – an African zoo at its worst -- where a few miserable animals huddle in tiny cages while the locals throw stones and prod them with sticks.  An especially sturdy cage contains the last generator captured in the wild.

Then, the Grand Mosque, a gift from Libya’s Khadaffi to this Muslim nation.

We finish the afternoon with a boat ride on the Niger.  Along the bank are hotels, embassies, the presidential palace, and mansions of other kleptocrats.  A few miles upstream are hippos occasionally pop up to keep a wary eye on us.

On the way back, a short detour through a fishing village.  Here, an outdoor styling salon:

The next day we board our charter bus.  Our tour group is especially large because the security situation requires that any travel outside the capital have armed guards.  At least the group size gets us a giant bus with plenty of room to stretch out.  Even though November is nearing the cool season, the AC is most appreciated.

After stopping at the Health Ministry for CoVID tests (will be needed for onwards travel) we drive to the Koure Giraffe Reserve, home of the few giraffes remaining in west Africa.  It’s not like they are thick on the ground – we spot three, which is almost 1% of the total of the subspecies.

Then, on to Dosso, where there is a moderately-interesting regional museum.

Far more appealing is the palace of the Sultan of Dosso, one of five traditional rulers in Niger, where we are greeted by his colorfully-robed attendants.

The throne room is centuries old.

We even are favored with an audience with the Sultan.  (Although he is not interested enough in my visitation to turn towards the camera.

The next day is an all-day drive to Maradi, the second largest city in the country.  The roads are in horrendous condition, so much so that our bus breaks an axle (or possibly a leaf spring).  In the first world, that would mean a tow truck and a replacement bus.  Here, that means a mechanic arriving on a motorbike with the needed part and a few hand tools.  For the next several hours he works in the 100 degree heat and under a blazing sun to jack up the bus, remove a wheel, and replace the broken part, all without the aid of any power tools.  Luckily, we get to stay inside the bus with the AC running full blast.  We arrive at Maradi well past dark and having missed an intermediate village visit.

It’s a few hours drive more to our destination, Zinder, the former capital.  We leave before dawn, witnessing the sunrise over the Sahel landscape.

At last we reach our destination: the 300 year old palace of the Sultan of Zinder.

Unfortunately, he is out of town, leaving a life-size poster in his stead.  His aides and attendants greet us in the formal reception room.


While our security contingent bemusedly looks on.

There are plenty of colorful characters hanging around the palace.

Afterwards we take a walk though the surrounding old city, creating quite a stir among the children.  They don’t get a lot of visitors here.

It’s 530 miles back to Niamey, too far for one day.  After lunch we drive back to Maradi for the night, finishing the next day.  On the road we pass truckloads of onions. One of the bases for the invasion of Iraq was an intellengence report that Saddam Hussein had been getting shipments from Niger, whose only known exports were onions and “yellowcake” uranium ore. 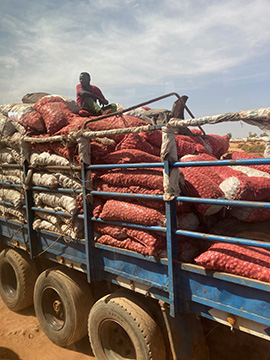 That’s it for Niger.  I would like to visit the desert city of Agadez in the north, historically a gateway to the Sahara for the caravan trade. Unfortunately it is not on the itinerary because it is currently considered too dangerous by tour operators.  For the same reason, we cannot go overland to our next country.  So the following morning we are back at the airport for a ridiculously expensive one-hour flight.

Ougadougou is a name that just rolls off the tongue.  It is capital of what used to be Upper Volta, which has been infelicitously renamed Burkina Faso (“Land of Incorruptable People” or something thereabouts, a name as implausible as it is unmemorable).  As a colony it was part of French West Africa.  Another country, but same weather.

We visit the large statute of former leader Thomas Sankara, who seized power in a coup in 1983 and was ousted the same way in 1987.  With Castro’s Cuba as a model, he set up Revoluntionary Defense Committees and People Revolutionary Tribunals, banned opposition parties and set out to remake the country, including renaming it.  Thus, although he was the fifth president of Upper Volta, Sankara was the first president of Burkina Faso.

He is now considered the “Che Guevara of Africa”,  a fitting comparison as they both are cult figures based largely on myth.  It’s a good photo op even if you don’t want to buy a T-shirt.

There is also the Monument des Martyrs, a grand project of Thomas Sankara.  I gather from the explanation that forcible changes of government you like are called “revolutions”; those you don’t are “coups.”

The next day we travel to Tiebele, a village noted for its painted walls.


The local women give us a demonstration of wall-painting using locally-found materials.  I am disappointed that they miss the opportunity to add “Let’s Go Brandon” to their mural.

After lunch, the menfolk put on little dance show.  Perhaps due to the mid-day heat, they keep it mercifully short.

Back in Ougadougou we hit the National Museum.  Underwhelming exhibits, but the surrounding compound showcases the varying regional architecture.

The Grand Mosque, also a gift from Libya, remains unfinished because funding ceased when Khaddafi fell.

The next day we drive to Bobo-Dioulasso, the country’s second city.  Along with way we stop to visit the sacred crocodiles of Bazoule.

They are kept well-fed on live chickens and thus have no need to snack on tourists.

The principal sight of Bobo is its two hundred year old mud mosque.

The second morning we are start out on a walking tour of Bobo.  Unbenownst to us it is an unscheduled “Kill The French Day.” Boko Haram – radical Islamist jihadists – are active throught the Sahel; two days prior 53 policemen were killed in an attack in the north.  Angry about the general lack of security, people blame the government and the French, the latter under the theory that if the French had not come there would be no Boko.  We don't get far before we are mistaken for Frogs by the excitable lads and are forced to retreat back to the hotel where we are sequestered for the day.  As we lounge by the pool we can heard the mob chanting outside the nearby market before they lose their enthusiasm and go home for the evening.

The final day we drive back to Ougadougou.  On the highway we pass a line of French military vehicles making their way north from the port in Ivory Coast.  It takes over an hour to completely pass the convoy.

Await my evening flight to Paris,  I take the opportunity to do some last-minute souvenir shopping. Thence to Thomas Sankara National Airport and back in Jacksonville the next afternoon.