We are met at the airport and driven to our houseboat.  The English got into the habit of summering on houseboats on Dal Lake.  It became so popular that hundreds of houseboats now line the shores, but years of tension and conflict have largely wiped out the tourist industry. The fleet remains, the owners waiting for the day -- maybe never -- when visitors return.

The houseboats float, but are immobile. The interiors are opulent in an overdone sort of way.  Every surface is carved wood, mostly walnut.  A typical design is a sitting room in front, behind which is a dining room, a kitchen, and three bedrooms. Meals are prepared to order by our own cook and are delicious.  During our stay, the other bedrooms are unoccupied.  Rowboats take us from the roadside landing to our boat. Each time we want to leave or return, as if by magic (or cell phone) the ferryman reappears.

The first day we visit Mughal gardens, followed by an excursion around the lake.  Vendors approach in other rowboats (motorboats are not permitted to intrude on the tranquility of the lake) to offer us crafts, jewelry, and souvenirs.  The word is out that foreign tourists have arrived, when we are not out on the water other merchants come to the houseboat.  They are good salesmen: polite, friendly, and persuasive, not intrusive or bothersome.

The city itself might be prettier if it were not so congested. It has an ornate mosque and is overlooked by a hilltop ruin of an ancient fort. Centuries-old chinar (oriental plane) trees line the streets. Soldiers are everywhere to be seen: they are Hindus and Sikhs from other parts of India and  – no Kashmiris join the military – and are viewed as occupiers.

Of course, there’s rug shopping.  Kashmir is famed for its beautiful rugs, and an especially gorgeous example in silk is carefully wrapped and shipped to Jacksonville for Stately Bergwerk Manor along with a bold tribal woolen to be a wedding present in London.

We take an excursion into the countryside for a horseback ride through the heavily forested and scenic hills, where the weather is a bit chilly.

After five nights on the boat, it's time to move on.

North of Kashmir, at the very "top" of India and jutting into Tibet/China, is Ladakh, a former Buddhist kingdom. It is aptly called “Little Tibet.”  Getting there from Kashmir normally involves a rugged two-day drive, but there is a direct flight once a week, of which we avail ourselves.

Leh, the capital, does not look like anywhere else in India – it looks a whole lot like Tibet. The air is clean, crisp, and fresh.  The streets are uncrowded.  The archiecture is Tibetan, not the higgledy-piggledy pile that characterizes Indian cities.

The small city (population 30,000, what would be a small neighborhood in Calcutta or Mumbai) is ringed by hilltop forts, monasteries, and stupas.  The hikes to reach them are invigorating but manageable and afford nice views along the way and once there.  Dominating the city is the 17th century Leh Palace modeled after the Potala, the Dalai Llama's residence in Lhasa.

Our culinary discovery is momos, Tibetan dumplings. I am normally not a dim sum/periogi/pelmeni/ravioli fan, but momos are fried rather than steamed or boiled, which makes all the difference.

We hire a car and driver for a day trip to visit some of the monasteries along the Indus River.

Most of them are pretty torpid, but at Stok monastery the monks are assiduously pouring colored sand to form complex mandalas that will be destroyed upon completion in a ritual symbolizing the transitory nature of this existence.

Our whirlwind schedule affords us the excuse to forego camping and other roughing-it attractions of the region.  After three days we are back at the airport to visit another former Buddhist kingdom.

Nestled between Nepal and Bhutan, Sikkim is the smallest state in India in population and the second smallest in size (after Goa). It was an independent country until 1975, when the monarchy was overthrown and India took over.  (New York socialite Hope Cooke was the last Queen of Sikkim.)  Bereft of any flat land, Sikkim has no airport: after changing planes in Delhi we fly to Bagdogra in West Bengal.  From there it is a four-hour drive to Gangtok, the capital.  Foreigners need a permit (readily obtained at Bagdogra airport) to enter.

A good portion of the population is crammed into the narrow valley of Gangtok. The lower elevations are quite congested and buildings perch precariously on the steep hills surrounding.  It’s warmer and wetter than Leh, (which, like Tibet, is high desert); our entire time there the low-hanging mist never dissipates. 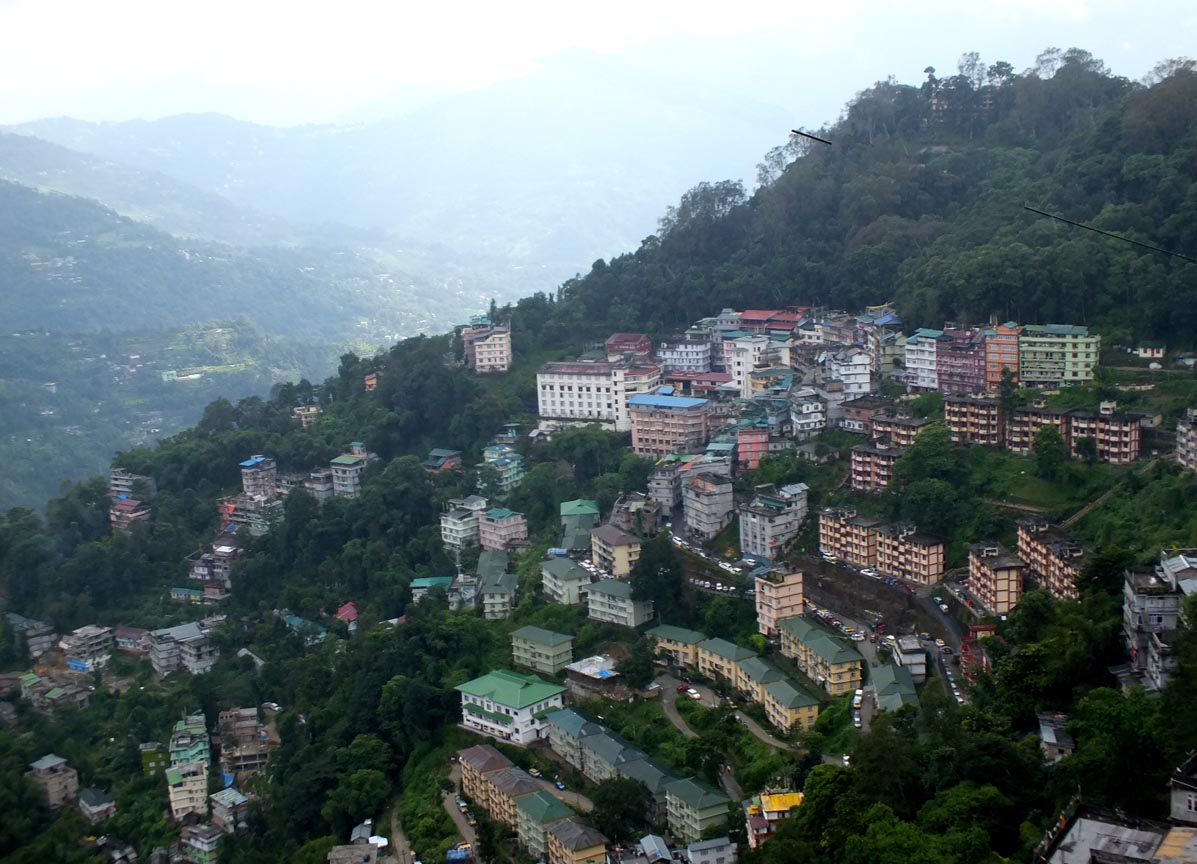 There’s not much special to do or see. There are possible excursions to a monastery, glacial lake, or a forested park, but when considering the gloomy weather these don’t hold much appeal, especially in comparison to what we’ve just seen in Kashmir and Ladakh. The look and feel of the town is very much India. (We do find a Tibetan restaurant serving momos.) I had figured on three days here, but after a full day of walking around I am planning an early escape.

Darjeeling,“The Queen of the Hills,” is a storied place that I’ve never been. As the crow flies, it is only 60 miles from Gangtok (the region was orginally leased from the ruler of Sikkim), but getting there takes much of the day.  The roads are good, but slow.  The scenery is excellent as we wind our away past mountain villages and tea plantations.  For the last bit we parallel the route of the Darjeeling Himalayan railway, the century-plus old “toy train” that used to be the only mode of access.

Darjeeling became famous as the hill station where the British escaped the summer heat of  Calcutta. The once-tranquil and exclusive getaway now hosts the Indian middle-class masses. Its Raj-era buildings are clustered atop a narrow ridge overlooking tea plantations and the snow-peaked Himalayas. On a clear day there is a good view of Kangchenjunga, the world's third-highest mountain. Now, the city is bursting with a year-round population approaching 150,000. Its economic foundation is tea and tourism. Not much attention is given to the decaying churches and civic buildings.

At the lower edge of town is the art-deco train station. Completion of the narrow-gauge railway in 1881 enabled the English to get in and the tea to get out. At present, due to landslides the full length is not in service, but the line still provides daily service between Darjeeling and several smaller towns below.  At the terminus there is a small repair shop and a miniature turntable. The tracks run alongside and through the streets, where the train chugs along at a walking pace. (I don’t think its speed ever exceeds 10-15 mph.)  Rail buffs come from all over to admire the steam locomotives and ride this living antique.

In the days before air-conditioning, escaping the heat of the Bengal coast was attraction enough; other diversions are not exactly thick on the ground. Two days are sufficient. I am not hugely surprised that the taxi that drove us from Gangtok is still here, ready and waiting to drive us back to the airport at Bagdogra.

We fly to Delhi. So far we have stayed at middling-to-nice places.  For the last two days before our flight(s) home I have snagged a favorable rate at The Claridges, the flagship of the eponymous chain of luxury hotels.  True elegance, made even better by their too-good-to-refuse offer of an suite upgrade and a limo ride back to the airport. After checking in, Linda loses all interest in sightseeing in Delhi. That’s okay; we’ll be back in a few weeks.