It’s been a month since the last trip so it’s time for another, Xmas fare giveaway #3.  Linda has always wanted to visit the Holy Land, but Etihad does not serve The Zionist Entity, so we have booked a flight to Amman, Jordan.

The route requires overnighting in Abu Dhabi each way.  We arrive on Friday, the Muslim day of rest.  The city is shut up tight.  Not that there is much to see anyway.  The city is very modern, but lacks the vibrancy of Dubai. Our hotel is nice, though – we have a full suite.

Having seen nothing so far, the next day on the way to the airport we stop off at the Grand Mosque.  Very new, very large, very impressive.

Our destination is only about two hours by air.  We arrive in late afternoon and get a taxi to Madaba, a desert city where I stayed last time.  It is more interesting and actually closer to the airport than Amman.

Madaba was an early Christian settlement.  There are a number of mosaics, the most famous of which is a map of the entire middle east from the 6th century.  It comprises the floor of the basilica. 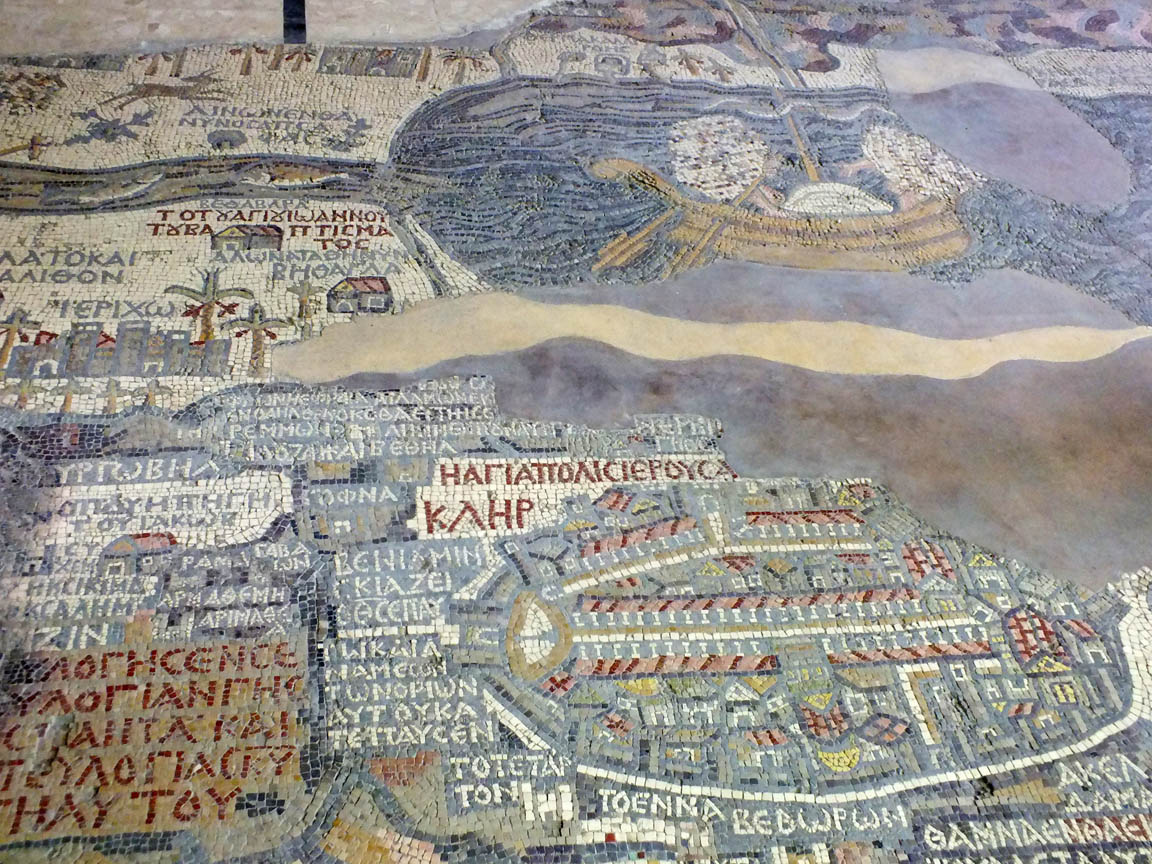 A few miles from town is Mt Nebo (Pisgah in the Bible), where Moses was shown the Promised Land.  From it, one can see to the Dead Sea, beyond to the West Bank, and on a clear day, all the way to Jerusalem.  At the summit are the ruins of a 6th century monastery.

The road descends rapidly to the Dead Sea, the lowest point on earth.  We continue on to Bethany Beyond The Jordan, the site of Jesus’ baptism.  A hefty admission charge combined with a general low level of tourism make for a very uncrowded visit.

“Jordan River is deep and wide” goes the spiritual, but reality is anything but: at present the river is a dinky stream barely ten yards across.  I make like Jesus and baptize my big toe.

The ruins of several ancient churches mark the likely baptismal spot, which due to changes in the river's course, is now a bit inland from the current shore.

On the opposite bank, on the Israeli side, is a huge tourist complex.  The actual site, as best as can be determined, is on the eastern bank, and sees few visitors; the “pretend” location on the western bank hosts tens of thousands.  Although all is tranquil, Israeli and Jordanian soldiers in their respective watchtowers keep a careful eye on things.

In the afternoon we visit the Dead Sea.  Although the road runs along its shore, there are only two public access points: a grotty public beach and an pricey resort.  We really only want a quick visit, but the admission tariff at the latter venue compels making an afternoon of it.  After the mandatory float (it’s impossible to sink), we have no desire to linger in the viscous brine.  The "beach" is rocks and mud (available for smearing), and blisteringly hot.  Good thing there is a freshwater pool with shade umbrellas.

Madaba is also a convenient base for a trip north to the Roman ruins at Jerash.  On the way we stop at Aljoun Castle, a Crusader-era fort built by a nephew of Saladin.

It is school visiting day, and the place is overrun.  We are greeted like rock stars.

Jerash was a substantial provincial city.  Settled since Neolithic times, the city proper was founded by Alexander the Great.  A large ceremonial gate was erected for the visit of the Emporer Hadrian in the year 129.  The city thrived until leveled by a series of earthquakes in the 8th century. Abandoned, the site remained unoccupied until the 20th century, leaving the Roman ruins available for reconstruction instead of being the underlayment of a modern city.

It is a short drive from Madaba to the Allenby border crossing, which connects the West Bank with Jordan and is the sole permissible crossing point for Palestinians, who are not allowed to use Israel's Ben Gurion airport and must fly out of Amman.  Tit for tat: Israelis are not permitted to enter Jordan via this crossing. The original Allenby bridge was built in 1918.  The wooden bridge has been replaced by a modern concrete one which the Jordanians call the King Hussein Bridge (the Israelis still call it Allenby).

We take a taxi to the Jordanian border post.  The rules allow us to freely exit, but our airport-issued visas only allow reentry at this same crossing.  After the paperwork formalities, we are putting in a waiting area until there are sufficient foreigners to justify breaking out the fancy transport van.  (Arabs are driven in a junky bus.) The journey is a matter of yards.  The van drops us at the Israeli border post, where processing is a model of efficiency: we surrender our luggage, go through immigration, and retrieve our bags from a airport-style carousel.  As American tourists, we encounter no hassles, rudeness or delay.

A taxi brings us to Jerusalem.  The route runs through the desert up into the Judean hills, past the controversial “settlements” and into the heart of Arab east Jerusalem to the Damascus gate.

I was last here in 1973, and boy have things changed!  The place is almost unrecognizable.  Of course, the Old City walls define the geography, but the surrounds have changed markedly.  Arab east Jerusalem is still tatty but much more congested; west Jerusalem has a thoroughly modern overlay.

We stay in an area called The German Colony, whose residents were deported by the British as enemy aliens during WWII.  Their graceful 19th century buildings have been gentrified into an upscale residential neighborhood.

The Old City is within walking distance so that is where we first go.  Forty years has brought many changes.  Within the walls are the numerous historic and religious sites plus much newly-built infrastructure to accommodate the hordes of tourists and pilgrims.  Apart from the Arab quarter, the only residents seem to be religious Jews who have emigrated from America and rebuilt the historic Jewish quarter.  The area around the Western Wall has undergone the biggest transformation: what was once a modest-sized cleared area is now a huge plaza surrounded by ancilliary improvements.

We have unknowingly arrived on a national holiday.  The first evening is the beginning of the national memorial day honoring the dead from the 1948 War of Independence and those subsequent.  Everything shuts down except Arab east Jerusalem, where their only sorrow is that all of Israel’s soldiers weren’t killed.  The day following is Israeli Independence Day, another day of contrasting celebration.  This is the day we attempt to visit the Temple Mount, home to the Dome of the Rock and Al Asqa mosque.

On my previous visit it was easy and straightforward – you just entered through a portal in the Western Wall.  Now, visiting hours are strictly prescribed to a short window a few days a week.  We line up, IDs in hand, and undergo rigorous screening for weapons and any sort of prayer books or religious material, as non-Muslim prayer is forbidden.  After security is a long cattle chute that passes over the heads of the Jewish worshippers and opens onto the raised plaza on which Herod rebuilt the Second Temple.

Once there, an unpleasant surprise: the natives are restless today (and pretty much every day).  A group of Arabs are chanting some sort of protest, punctuated by “Allahu Akhbars.”  Israeli soldiers quietly watch while Arab security men prevent western tourists from getting anywhere near the shrine.  After a few minutes all visitors are hustled out through another gate onto the streets of the Arab quarter, where the demonstration has proved contagious.  A good demonstration of political theatre, but in terms of sightseeing, a bust.

In the afternoon, a visit to the small town of Ein Kerem, just a few miles from Jerusalem. The reputed birthplace of John the Baptist, it is pleasant place with some nice churches.

We take a bus to Bethlehem, outside of Israel proper and within the jurisdiction of the Palestinian Authority.  Beyond the checkpoint is the separation barrier which keeps out the terrorists/freedom fighters (take your pick). Bethlehem was once 90% Christian and 10% Muslim, but now the ratio is reversed. The whole atmosphere is pretty grim: the pilgrim trade has collapsed, and certainly not encouraged by the ubiquitous anti-Israel propaganda. The limited visual appeal of the Basilica of the Nativity is even further restricted by ongoing restoration work.  There are some nearby shrines worth a look, but we are glad to board the bus to Jerusalem.

The next day we return to the Allenby crossing.  The reverse journey is quite easy.  Once again, we are treated to separate transport; this time they bring out a giant bus just for the two of us which takes us the the arrivals building.  Upon exiting, much as at an airport, the car rental agencies are lined up directly opposite.  We pick up the car I reserved from Avis.

We turn south and follow the last bit of the Jordan to the Dead Sea.  The highway runs along the eastern shore, then climbs into the hills.

Wadi Rum, in the extreme south of Jordan is the rugged and extremely scenic valley where Lawrence of Arabia was filmed (the real T.E. Lawrence pass through a number of times.)  It is a nature preserve in which only Bedouins and their paying guests are allowed.

We have booked two nights.  We arrive in late afternoon, leave the car at the entrance, and are transported by jeep to a semi-permanent tent camp.  There are sleeping tents, a central mess and gathering tent, and a building housing the showers and toilets.

There is not a whole lot to do other than admire the sunset.

Dinner is prepared in a unique desert manner: a pit is dug and hot coals placed in the bottom.  The various meat, side, and vegetable dishes are layered in a giant pot and placed atop the coals in the pit and covered in sand.  After a couple of hours, the sand is cleared away and a delicious, perfectly-cooked meal emerges.

In the morning we get an all-day jeep tour.  Dramatic rock formations.  Hidden springs. Petroglyphs left by the ancient Nabateans and by pilgrims marking the route to Mecca.  The clear blue sky and desert colors make it a picture-perfect day.

The second desert night is equally quiet.  In the morning we are driven back the entrance and we set out for Petra.

We have saved the best for last.  Petra is the #1 tourist attraction in Jordan.  Because the site is so large – an entire city – it is blissfully uncrowded.

Many of them you recognize from the many movies filmed there.

Many of the "buildings" are facades carved into the cliff faces with chambers behind.

It is a tiresome day of walking, but for the weary there are plenty of camels and donkeys for rent.

At the end of a long climb is "the Monastery."

A day and a half are enough to see the main sights.  Time to head back to the airport.  The first hour of the drive we slowly wind through the hills, then finally hit the desert plain and a wide-open highway.  They are waiting for me: a speed trap! A not-insubstantial fine, payable on the spot.

Back in Abu Dhabi for another overnight.  Unfortunately the T.S.A. closes the flight hours before departure, which we do not make.  Plan B is formulated on the spot: drive to Dubai, catch a flight to Bahrain, connecting in London, then to Miami, and a late night drive home.  Somewhat tiring, but all's well that ends well.