With no fixed itinerary, we are travelling without advance hotel reservations. No problem, as there is always someplace to stay and high season has not yet begun. We end up at a very nice hotel so new that the upper floors are still under construction. This is the view from our window. 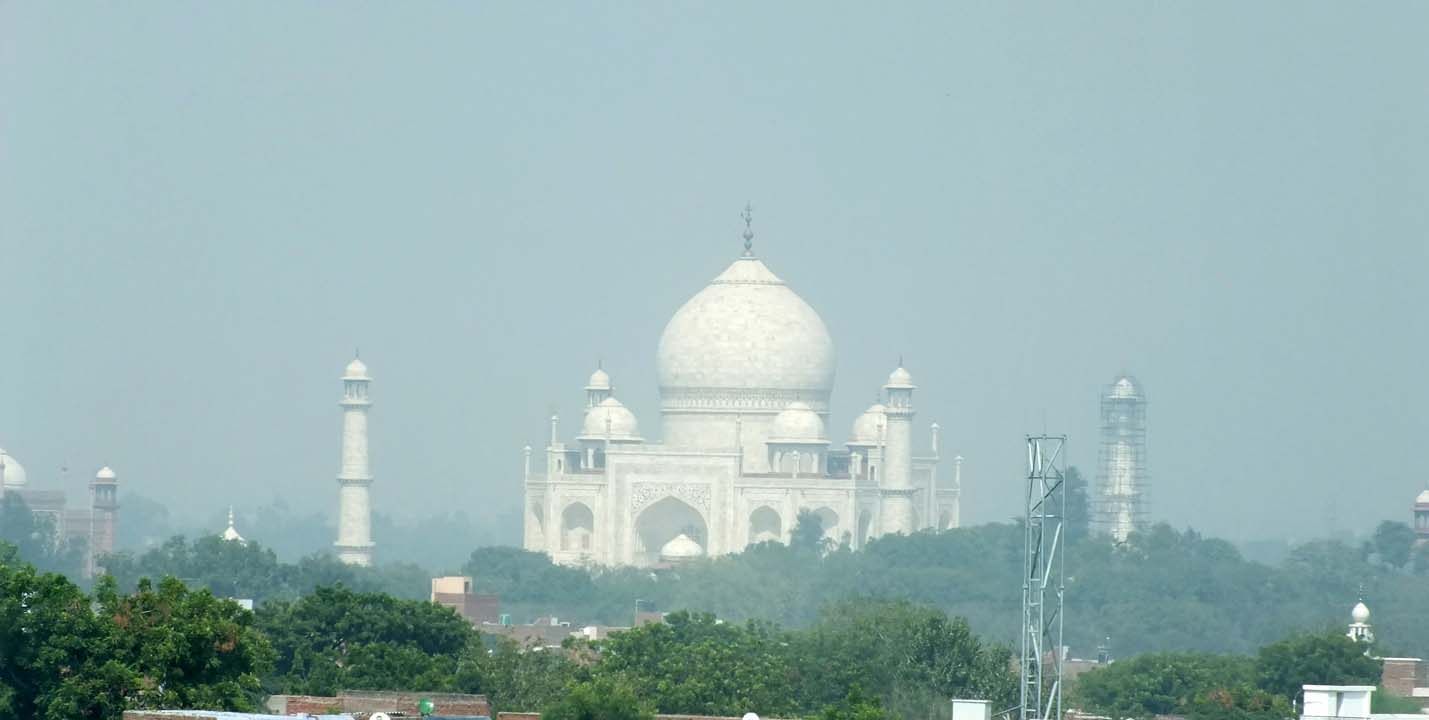 The best times to visit the Taj Mahal are sunrise and sunset. We decide to wait until morning. It hasn't changed in the thirty or so years since the last time I saw it except now we have a lot more company. 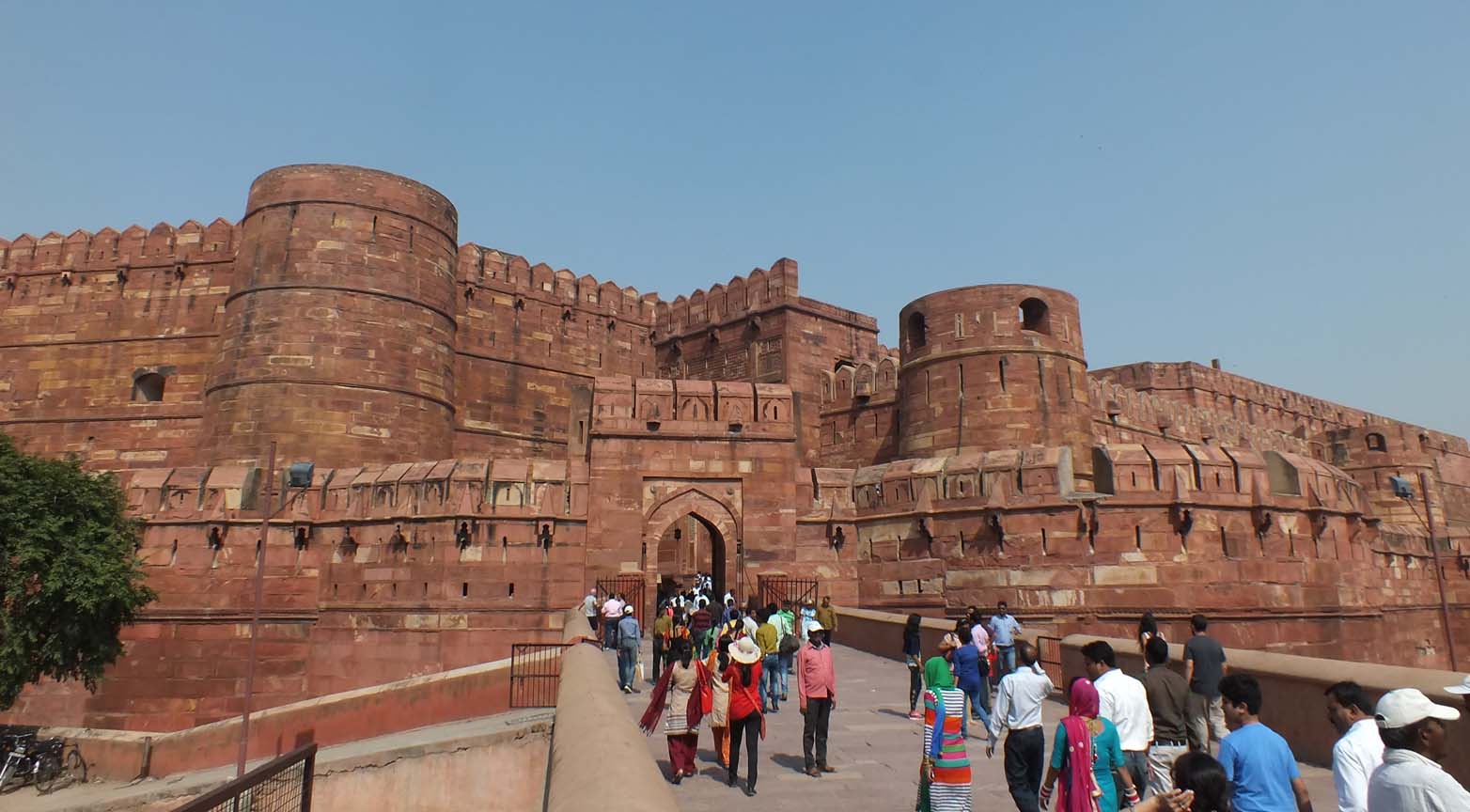 Before leaving town, a quick drive across the Jamuna River to snap the Taj from the rear. Then, to the train station for the train to Jaipur.


The adjacent Jantar Mantar is a 400 year-old collection of giant instruments with which the royal astronomers studied the heavens.

Finally, a quick look at the Hawa Mahal a high screen wall built so the women of the royal household could observe street festivals while remaining unseen. 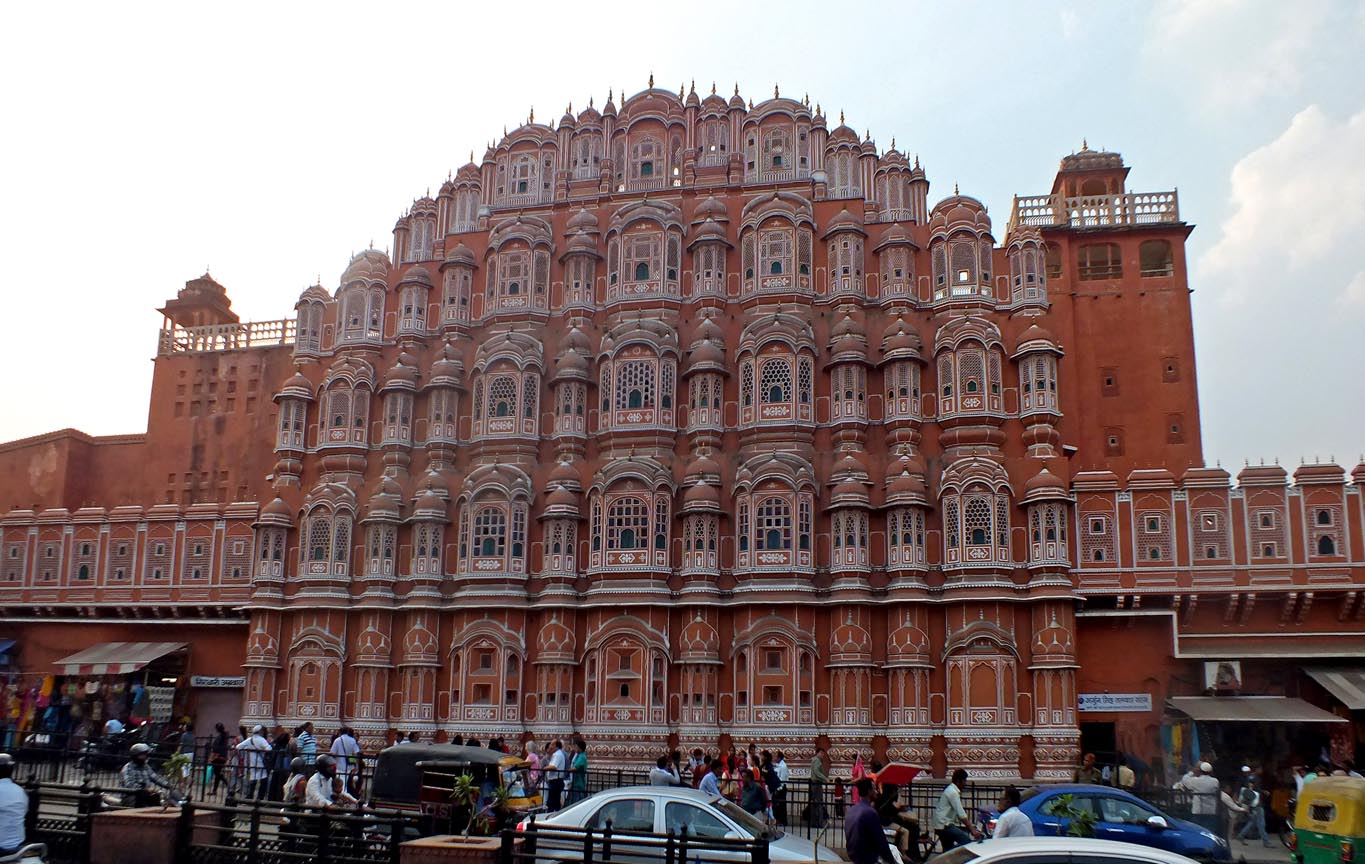 On to Jodhpur. No more standing in long queues petitioning for a foreign tourist quota train ticket. Now, one can book on-line. Trains are usually sold out, but you get assigned a place on the waiting list. At some point prior to departure you get a text message (I bought a local SIM card for my dumb phone) confirming the reservation and giving your carriage and seat numbers.  Never failed to come through.

We stay in a heritage hotel, the label given the many former palaces and stately homes that are now hotels. This one, Ratan Vilas, belonged to a nephew of the maharaja and is decorated with family photos and furnishings. Its relatively small and very nice.

Mehrangarh Fort, on a hilltop overlooking the city, was both a military stronghold and royal residence. 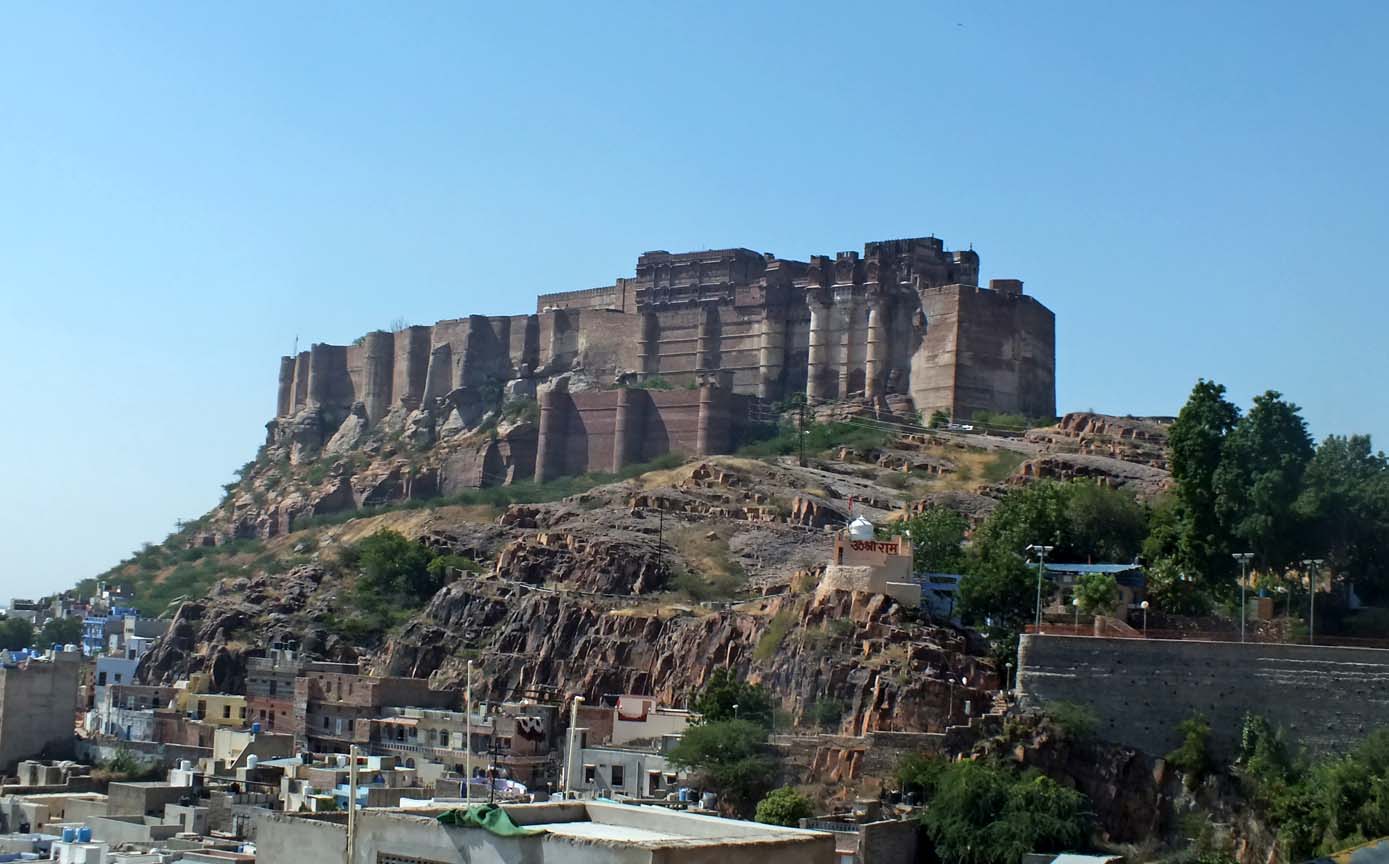 Still owned by the formerly-ruling family, it is now a museum.

The next stop on our tour of Rajasthan is Jaisalmer, where we stay in the Mandir Palace, the actual former royal residence in the heart of the walled city. Not only that, we get the maharaja’s suite. Exquisite stonework, stunning views. During the day paying tourists troop through; come evening, it's "residents only."

The India-Pakistan border is very close, and there is a major military presence in the area. As far as I can tell, the raison d'etre of the Indian armed forces are to fight Pakistan (and vice-versa). The Jaisalmer War Museum commemorates and celebrates the repeated conflicts with their neighbor. 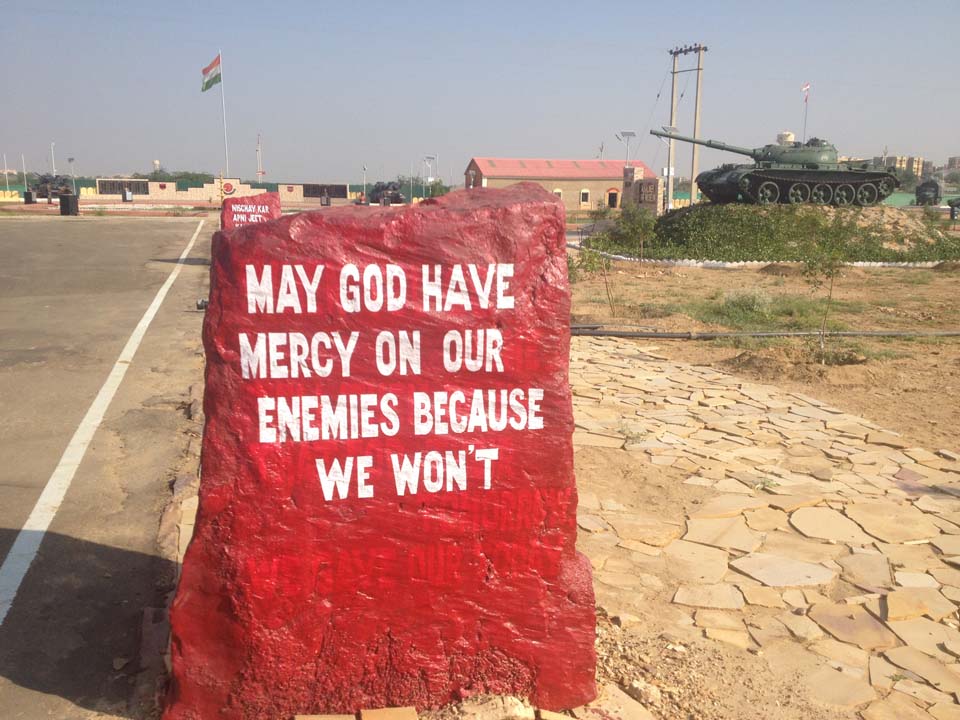 Jaisalmer is as far west as you can go in India.  There is a civil terminal inside the military airbase, but no scheduled flights. The rail line only runs in the direction of Delhi, and we want to go south to Udaipur. Eschewing the bus, we hire a car to take us in comfort for the eight-hour drive.

Udaipur, our final stop in Rajasthan, proves a bust. The weather is hazy and, anyway, there isn’t really anything to see. There is the iconic Lake Palace Hotel, which even on this high-end tour is beyond my budget. The place we do stay is a former stately home that has been renovated and expanded into a super-nice hotel.

On to the South: we board a flight to Bangalore for a late night arrival. After a hotel night, the morning train to Mysore, where the one must-visit is the palace.  So impressive I even bought the video (which I have yet to watch).

A sleeper train brings us to Madurai, home of the Meenakshi Amman Temple. The temple dates to the 6th century BC, although the current complex is “only” 500 years old. Above each of the gates are towers depicting human figures and gods. The tallest is seventeen stories high. Within are various shrines and halls (mostly too dark for good photography).

Madurai is famed for its fabrics. Across from the temple is a vast textile market where, in addition to rows and rows of merchants, an army of tailors are beavering away. A couple of hours after selecting the fabrics and having my measurements taken,  I walk away with six bespoke shirts.


A hired car takes us over the West Ghats, the mountain range that and separates the history and culture of the Kerala coast from the Tamil interior.  A steep and scenic drive that takes most of the day.

Kerala’s draw is its backwaters: a system of canals and waterways. The houseboat rental market has boomed at the expense of strife-ridden Kashmir; instead of ornate and elaborately carved stationary barges, these tourist vessels are a bit more rustic and move under their own power. We elect to sleep on land, but hire one for the day.

The first order of business is to stop at the fish market to buy the fixings for lunch, including foot-long prawns. As we motor along, the staff prepares a lavish repast that is served aboard.

It's a two hour bus ride to Cochin, a port colonized by Portuguese spice merchants. They were followed by the Dutch and then the British; their legacies endure in the churches and cemeteries that crowd the historic district.

Cochin is also home to the 600 year-old Paradesi Synagogue. Legend holds that the Jewish settlement dates from King Solomon, and records exist that Jews lived on the Malabar coast in Roman times.  There are only five or six Jews remaining, the rest having emigrated to Israel. 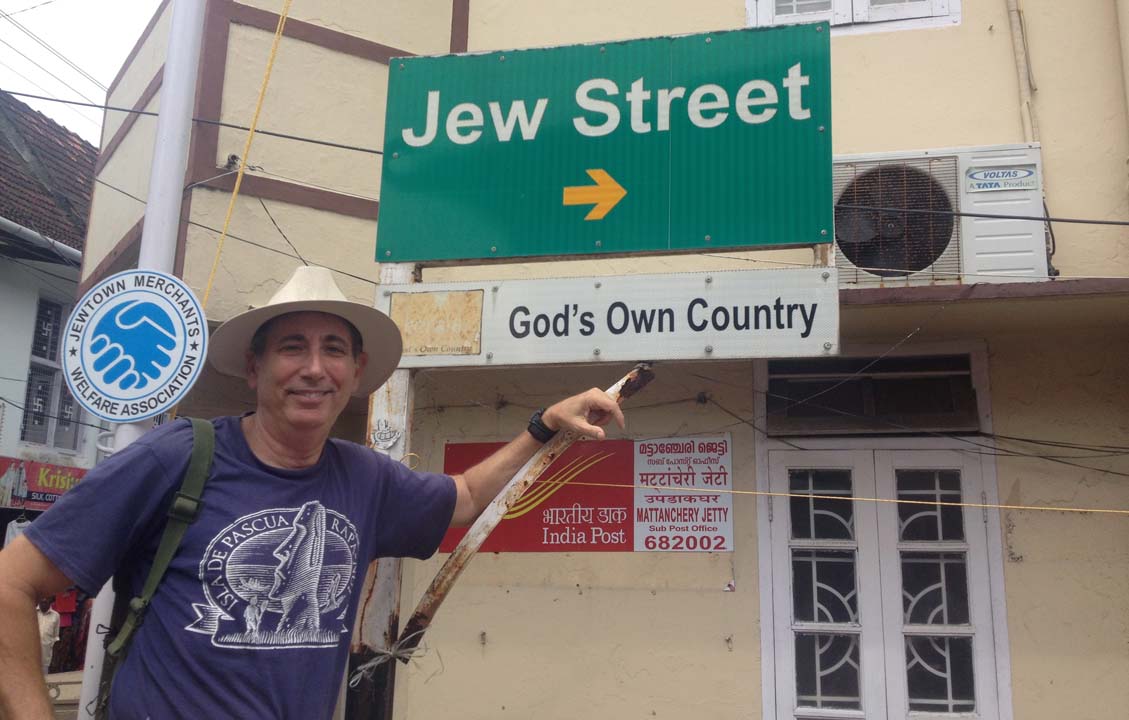 The historic Jew Town district also boasts some of the finest antique shopping to be found in India. Warehouses full of genuine and sort-of new antiques await the browser. Because the law prohibits export of anything older than 100 years, everything is “approximately 90 years old.”  Furniture and objects d’art are too big to bring home on the plane, so shipping is part of the deal. The minimum charge is for a cubic meter, which lets me select four large (and very heavy) items to join my Kashmir rug at Stately Bergwerk Manor.

The final night I endure for the second (and last) time in my life a Kathikali performance, the traditional Keralan dance featured elaborate costumes and make-up. One is supposed to be entertained by the numerous facial expressions which take years to master. I give it a simple scowl.

From Cochin we fly back to Delhi. It is the first day of Diwali, the Hindu festival of lights. It’s a major holiday: everything is closed. At sundown litterally millions of lit candles line the sidewalks and everything else. The next day we have a free day for last minute shopping before the long trek home.

Postscript: six weeks later four large wooden crates arrive in Jacksonville.  Although the actual shipping was prepaid, to redeem my treasures I am forced to pay a bevy of niggling "port charges" which aggregate to over $900 – a cautionary tale for those tempted by the offer of “we will gladly ship your purchases to your home.”