Back to Africa for another round, this time to knock off three more countries in a series of three private tours with an ad hoc group of avid travelers.

First is Gabon.  Access is via Paris.  Arrival is at Libreville, the capital, on the Atlantic.  Unfortunately, my luggage does not arrive with me.  It should come on the next flight, two days hence, but I'll be on the road then.  With only the clothes on my back, we head for our beachside hotel. 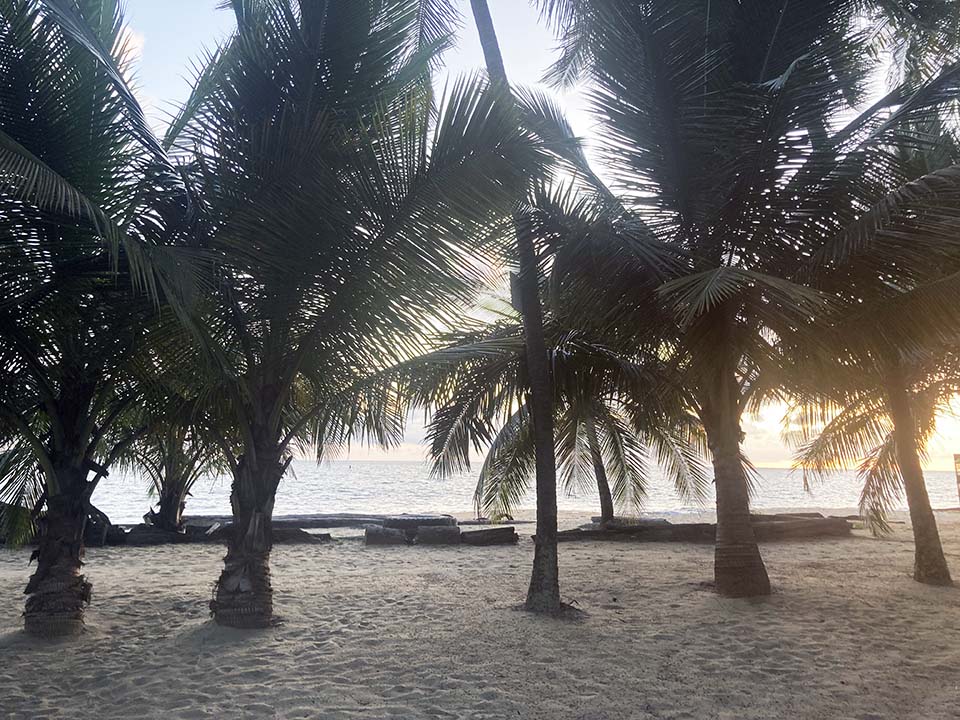 Gabon is a large and forested country.  Until the discovery of oil offshore, it was primarily known as a source of tropical timber.

The sights of Libreville are minimal.  There is an old mission church and a rather bizarre seaside statue of a freed slave – half man, half women, with its left side representing one sex and the right the other.  (Explanatory note: this statue was erected before science discovered the other 47 genders.)


The National Museum is housed in a modern building that used to be the US Embassy.  The usual collection of mud and sticks.

In town we take care of some business – an embassy visit to obtain visas for out next country.  Initially, the gals are denied entry because their attire does not meet their strict dress code.  Still wearing my airplane clothes, I make the grade.

The next morning we drive south to Lambarene, crossing the equator on the way.  The total distance is only 150 miles, but due to the lousy roads it pretty much takes all day.  All along the way we pass trucks hauling huge logs from the jungle.  Until the discovery of oil (Gabon is a member of OPEC), the country's principal export was forest products.

Lambarene is renowned as the site of the mission where Nobel Peace Prize winner Dr. Albert Schweitzer established his hospital.  A modern facility having been built a few miles away, the original hospital is now a museum.  The former living quarters are devoted to the man and his work.  His possessions are still here, as is his grave.

The hospital itself looks much as it did when built ninety-five years ago, even through it continued in use until the 1970's.

The city is the Ogoogue River.  From a landing behind our hotel we take a boat ride into  the surrounding jungle, stopping at an abandoned “eco-resort.”

After a two-night visit comes the long drive back to Libreville.

The next day a boat ride across the estuary to a landing in the mangroves, where we board 4X4s for a one hour ride on a very muddy track to the well-recommended Chez Beti, a safari campground in the Nyonie Preserve.

No camping necessary -- we have individual air-conditioned cabins.  There is a common area where absolutely delicious meals are served.

In the evening we go for a game drive in the reserve.  We spot several forest elephants, smaller and browner than the ones you normally see on the savannah, and buffalo.

The next morning is a gameless game walk.  We hike over hill, over dale, and down the beach, but no animals to be seen.  After a nice lunch, we retrace the route back to Libreville.

Our final day begins with another boat ride, this time to Turtle Bay beach resort. A very nice place for expats to relax, but nothing particuarly Africa about it. 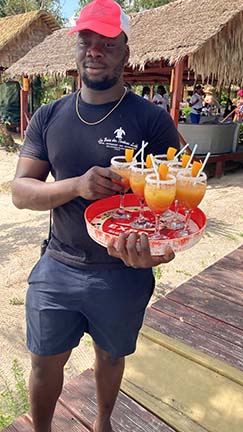 The city is named for the Italian-born explorer who was the first governor of the French colony.  Surprisingly for modern Africa, his eponymous city has not been renamed nor his quite-impressive mausoleum  razed or repurposed.

The city is surprisingly orderly and clean – the streets are not lined with trash and traffic flows smoothly.

The first place we visit is the Congo River rapids, immediately downstream from the city.  This is the raison d'être for the city – the river is not navigable to the ocean.  A series of cataracts prevents ships from coming upriver, necessitating overland porterage (later by railroad) for some 200 miles.  Above the rapids, large vessels ply the mighty Congo for over a thousand miles.

The next day is a highlight of the trip – a visit to the Lefini Nature Reserve to see lowland gorillas.  No grueling jungle trekking required – we travel by motorized canoe to where they live.  At the sound of the outboard engines they come to the riverbank and await the victuals we have brought.  A prime photo opportunity as we toss fruits and vegetable to these simian welfare recipients. We even are able to hand bananas to the youngsters.

We continue to the Lesio-Louma Gorilla Sanctuary, where large cages house those residents deemed too dangerous to roam free.  Iboubikro lodge is our home for the night.

On the way back to Brazzaville we take the scenic route. 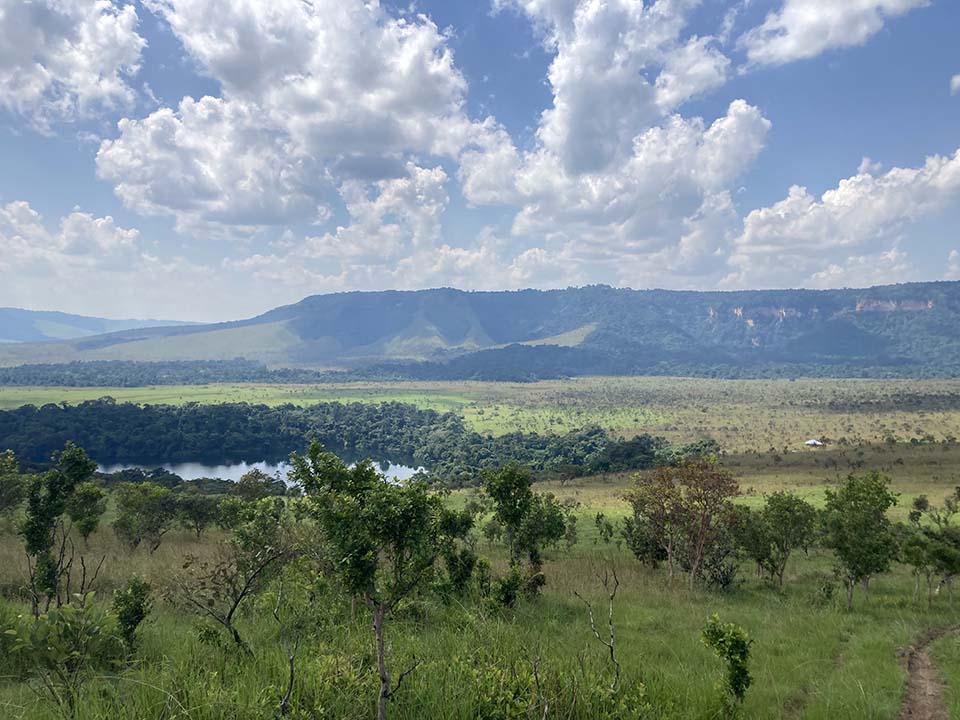 Once back, we complete our city tour, visitng the quite lovely Basilica Sainte-Anne and enjoying a very energetic cultural dance performance.

Followed by a cruise on the mighty Congo.  On the opposite bank is Kinshasa (f/k/a Leopoldville), capital of D.R.C., a megalopolis ten times the size of Brazzaville.

We proceed as far as the Manguengue Cliffs (a/k/a "The White Cliffs") and come back as the sun is setting.

The next following day is a overly long drive to Chutes de Loufoulakari, a nice but less than spectacular waterfall. 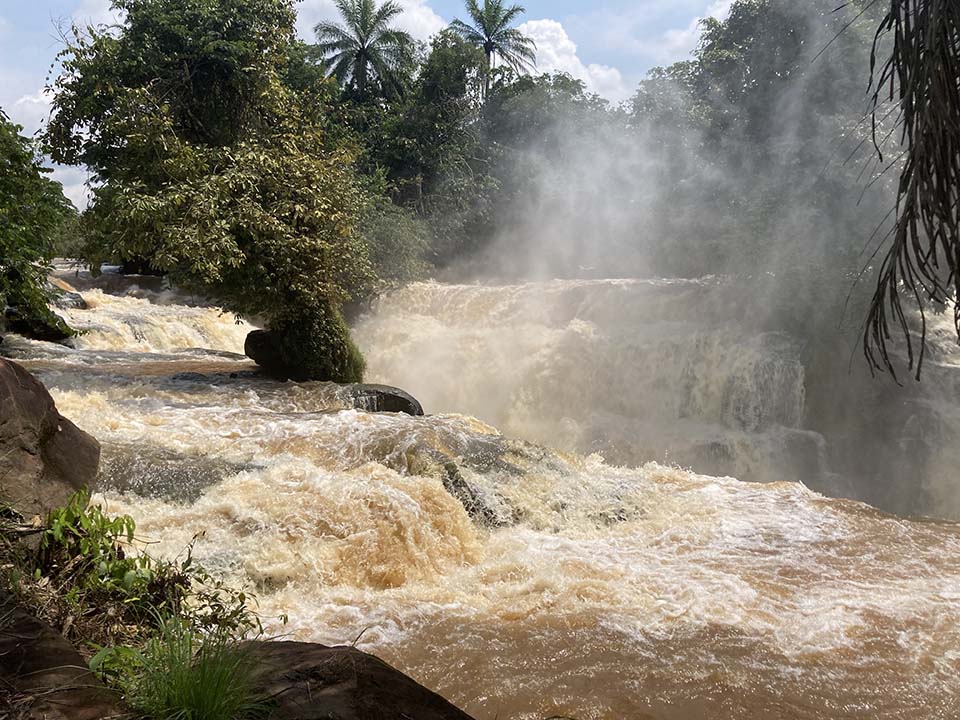 Another overnight in Brazzaville, followed by a short morning domestic flight to Point Noire on the Atlantic.  A historic locale, but not a lot to see and do. There is the abandoned railway station, a museum at a former palace of a tribal king, and lunch in a treehouse.


We also meet some sapeurs, well-dressed gentlemen/dandies/fashionistas for which the Congos are famous and a not-so-subtle hint that I ought to up my sartorial game.

An early morning drive from Pointe Noire takes us to the to the Angola border.  As we leave the city, I notice traffic streaming in the opposing direction and wonder why, if everyone comes to work bright and early, why is nothing ever open?

For the uninitiated, what follows is an account of the typical African land border crossing experience.

First problem, even though we have our visas, we need photocopies of everything.  Conveniently, there a a guy ready to take our passports and hop on a motorcycle back into town to get copies made (we send our guide with him).  After a while, he returns and our guide must take his leave.  The “facilitator” helpfully offers to change our remaining Congolese money to Angolan money, and at the going rate.   (Gee, how does the guy make any money?)

We have crossed into Cabinda province, an enclave of Angola surrounded by Congo and D.R.C.  Formerly known as Portuguese Congo, it's purpose was to provide access to the Congo basin and its vast slave trade.  Unfortunately, so much time has been wasted on border crossing formalities that there is little time for sightseeing prior to our evening domestic flight to the capital. 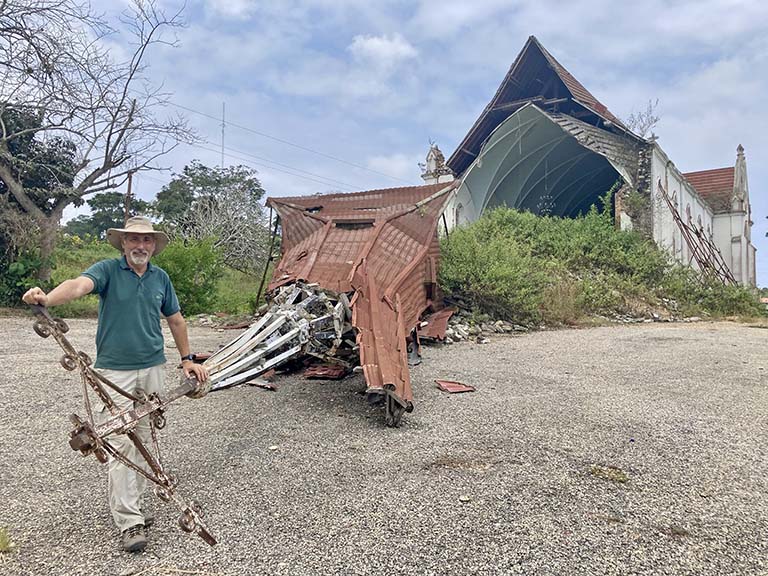 Luanda is boomtown, beneficiary of Angola's vast oil wealth.  Its skyline is reminiscent of Miami. 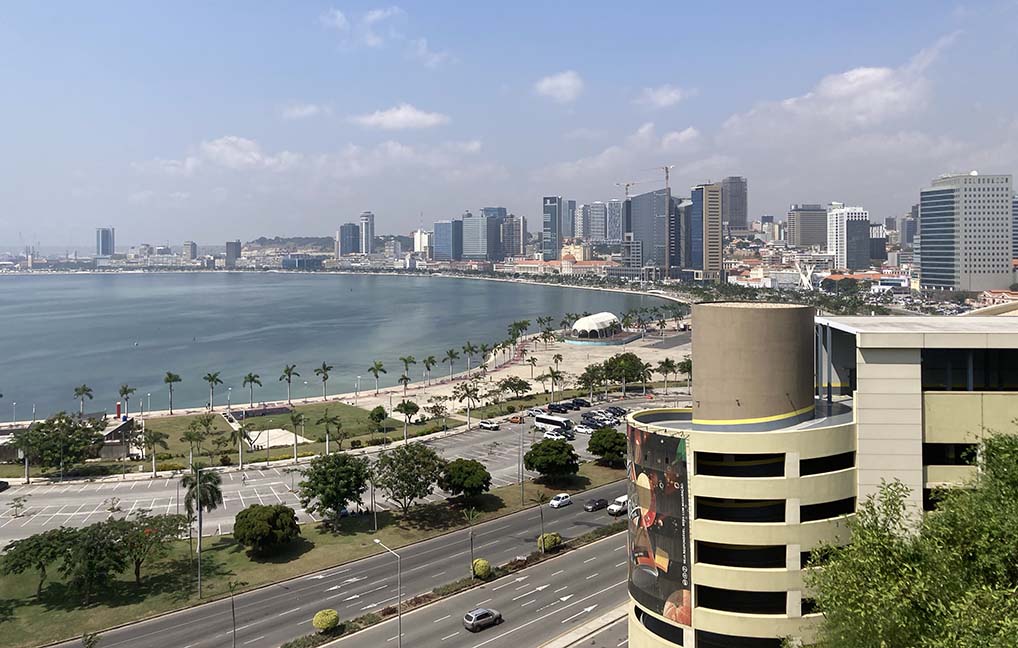 It also had the ignoble distinction of being one of the most expensive cities in the world. From the airport we drive to a small, very stylish and comfortable beachfront hotel. The other guests are mainly Americans working for Halliburton, the oil field services giant.

In the morning we drive to Shipwreck Beach.  Unlike the Skeleton Coast further south in Namibia where ships have run aground in treacherous waters, the hulks on this stretch of beach were towed here after being denied permission, for one reason or another, to enter or remain at the port of Luanda.

Sharing the beach are fishermen.  Teams of a dozern or more men set purse seines in the surf and laboriously haul them in.  The catch is pitiful – a small bucket of fish no larger than your finger.  The streets of Luanda may be clogged with luxury vehicles, but, for most of the people, it's a hard, hard life.

After that, a long drive to Kalandula Falls.  We are in two vehicles, one of which (the one I am in) has a mechanical failure en route.  We have paid top dollar to stay in  the lodge directly facing the falls, but by the time we reach it it is too dark to see anything.  Our companions in the other vehicle provide little comfort with their rapturous descriptions of the afternoon and evening views we missed.

We don't do much better in the morning. Mist obscures the Falls directly before us.

We  hike down to the base, and later drive to another vantage point.

There is more scenery in the area.  These are the Pedras Negras (Black Rocks), dominating the landscape and towering over the buildings at their base.

Running behind schedule, we race back to Luanda to catch our evening flight to the southern city of Namibe (not the country of Namibia, but not far from it), where we have individual cabins in a beachfront hotel.

The next day we visit a fishing village, where I lend two hands.  The haul here is as pitiful as at Shipwreck Beach.

We drive through Curoca canyon and its red sandstone formations that could be in Arizona or Utah, but aren't


The following day is a long driveoff road in the desert followed by an uphill hike in the hot sun  to the petroglyph of Virei.  Unfortuaely, they are in poor condition and deteriorating rapidly.  Definitely a disappointment.

A nearby village affords a photo opportunity.  As is quite apparent, none of the country's oil wealth reaches here.

From there we drive to Lubango, where we stay at the luxurious Pululukwa Resort.  Our cabins are large and sumptuously appointed and the grounds beautifully landscaped.  Zebras and other fauna freely roam the grounds.  Angola is largely devoid of wildlife as most of the animals were killed for food or sport during the 27 year civil war, a Cold War proxy conflict that pitted Cuban soldiers against South African troops and that endied in victory for the communists in 2002.


Lubango is a pleasant city.

It is set in the hills, and the road to it offers some fine vistas.


The main reason for coming to the south is to visit the various tribes.  They live and dress traditionally.  This is pure and authentic, not a show for the benefit of tourists

We fly back to Luanda for our final day..We start out with Miradoura da Luna (viewpoint of the Moon), their version of Bryce Canyon – sandstone formations facing the sea.  Nearby is the not particulary interesting slavery museum – most of the estimated 5 million slaves shipped to Brazil were taken from Angola

Then a city tour, beginning with the 16th century Fortaleza Sao Miguel on a bluff overlooking the city.  It is now a military museum celebrating their victory over the colonists and imperialists.

As well as some modern ones.

After three weeks and three countries, it's time to bid adieu (to Gabon and Congo) and adeus to Angola.