Algeria, the largest country in Africa since Sudan underwent mitosis in 2011, is largely untouristed.  An anti-Western regime, a 10-year civil war, and ongoing protests and anti-government activity combine to keep it that way.  For Americans, a tourist visa is a tough get: even after I submitted my Letter of Invitation to the consulate it took five weeks; my passport came back only two days prior to my departure.

There are no direct flights from the US.  I overnight in Madrid, from which it’s a short flight to Algiers (confusing airport trick: the destination is listed only by its Spanish name, “Argel”, on the departure boards).  I arrive on a Friday, which turns out to be demonstation day: for a year now thousands of middle-class protesters fill the streets on a weekly basis to demand open elections and an end to corruption.  People are more high-spirited than angry, and the phalanxes of riot police just stand around and watch.

There is a still a day before the group assembles for the start of the tour, I wander about on my own pre-tour of the city.  Founded by the Phoenicians, Algiers rose to importance under Ottoman rule.  In the 17th and 18th centuries it was a principal port of the Barbary pirates.  From 1830-1962 all of Algeria was ruled by the French, not as a colony but directly as a department of France.

The French left quite an elegant footprint, building on the flatlands outwards from the port.

The Arab quarter, a/k/a the Casbah, is built on a hill overlooking the port.  Good for defensive purposes, but quite inconvenient in all other respects.  Its lanes are crowded and narrow.  It was and still is the poorer part of town.

Its highlights are the Ottoman fort and the restored palace of the Dey (Ottoman governor).

After Algeria became independant in 1962, the French decamped.  Almost all Europeans left.  The cathedral is now a mosque, as is the synagogue (now referred to as “the Jewish Mosque).”

Atop the hill, overlooking the Casbah, is Notre Dame d’ Afrique (Our Lady of Africa), a19th century basilica, that has been recently restored

On the other side of the city is the botanical garden.  It has seen better days, but is still quite nice.  Location shots for the 1938 Johnny Weismuller version of Tarzan were filmed here.

On the hilltop above the garden is the Martyr’s Monument, dedicated to those who died fighting for Algerian independence.  Inside is an overly-detailed museum detailing the struggle that lasted from 1954-1962, a gruesome chronicle of massacres, tortures, and atrocities perpetrated by the French.  In truth, both sides conducted a very dirty campaign. If you come expecting a balanced approach, you will be disappointed.

I visit most locales twice: once on my own and again the next day on the group tour. 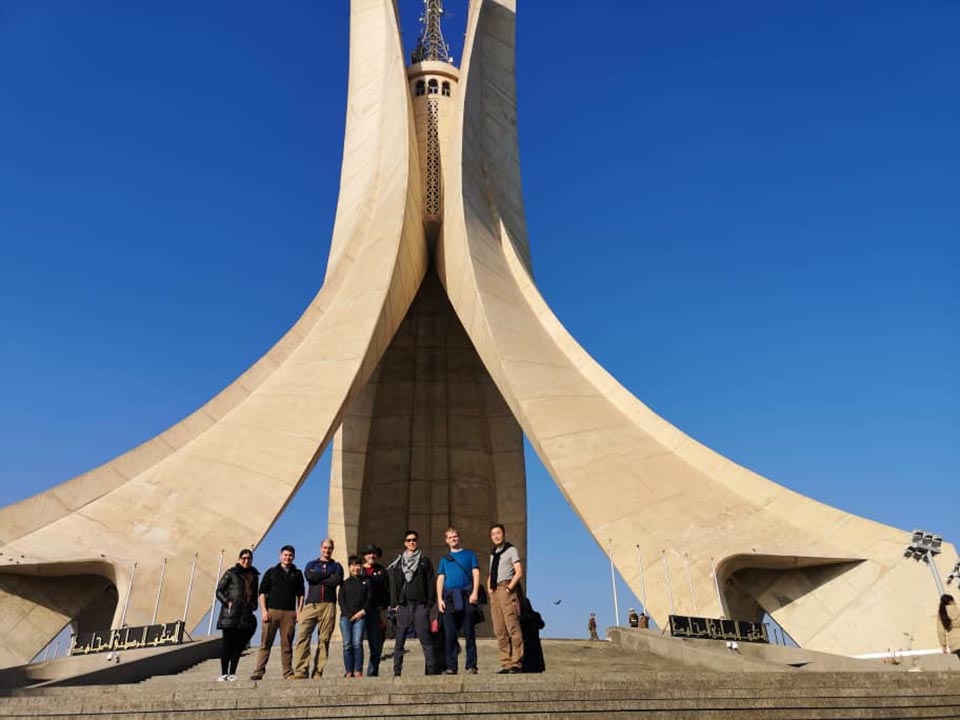 The next day we hit the road and drive 300 miles to Timgad, the site of the largest and best preserved Roman ruins in Algeria.  Built under the reign of Trajan as a retirement home for soldiers, it was sacked by the Vandals and thereafter abandoned.  There are no other tourists or visitors to be seen.

On the road north is the mysterious tomb of a Berber king. 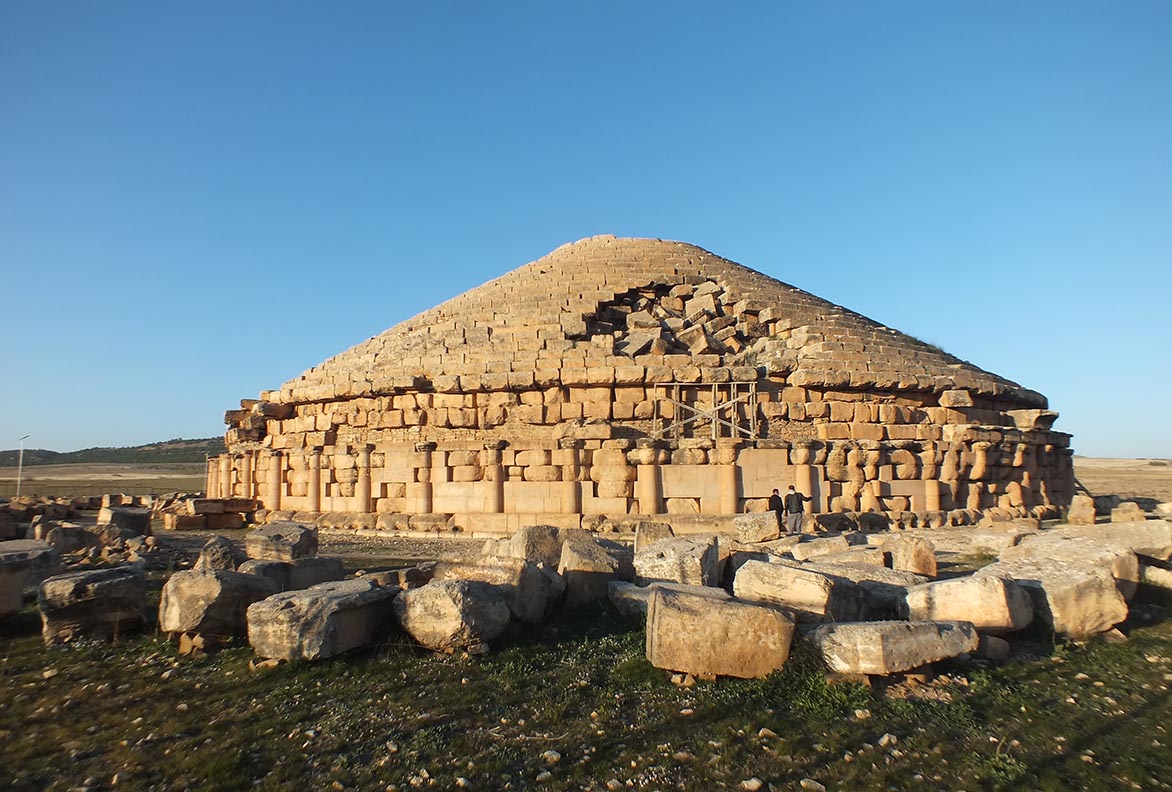 We spent the night in Constantine, the third largest city in Algeria.  It is noted for its bridges spanning the gorge of the Rhummel River that bisects the city.

It was a Roman city called Cirta until renamed in honor of the Emperor.  Finds from it and Timgad are displayed in the museum.

The French built a very large memorial arch honoring those fallen in World War I.  My impression is that the placques listing the names contain more French and Jewish names than Arab ones. 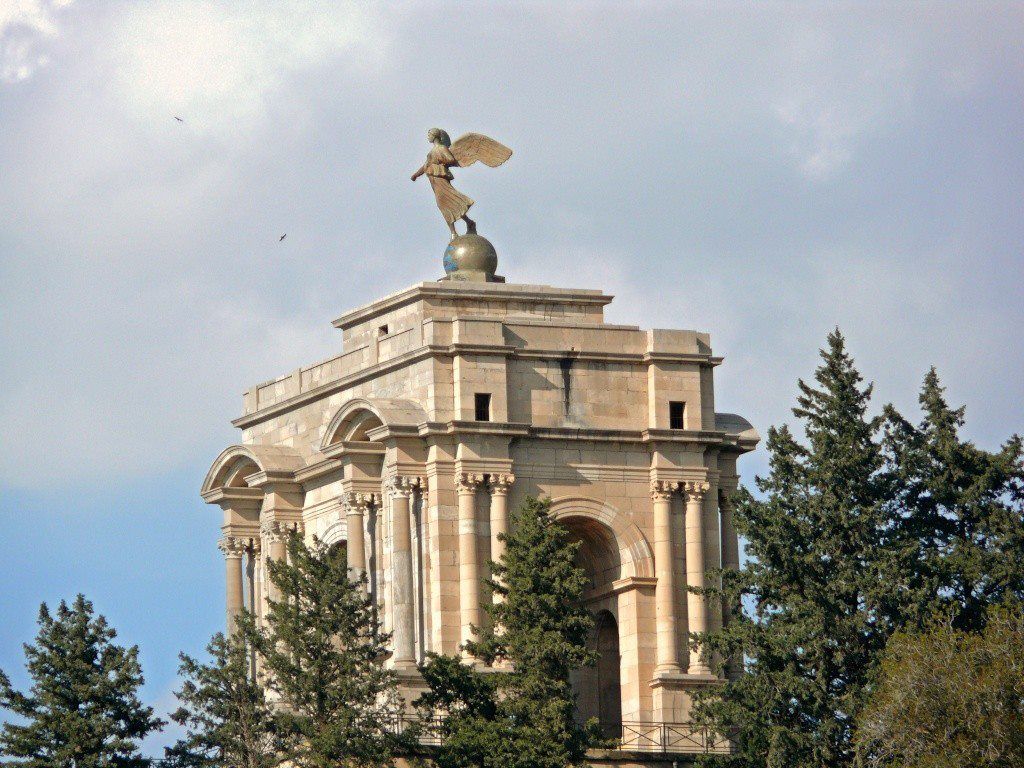 Our final stop is the new and very impressive mosque.

We drive back to Algiers for a late evening flight south to Bechar, deep in the Sahara, then continue by road to the oasis town of Taghit.  It lies beside the Gran Erg Occidental, a 30,000 square mile sea of sand. When you think “Sahara,” you think of endless dunes; actually, ninety percent of the Sahara is rocks, thin sand and gravel.  For big dunes, you need to travel to an erg. 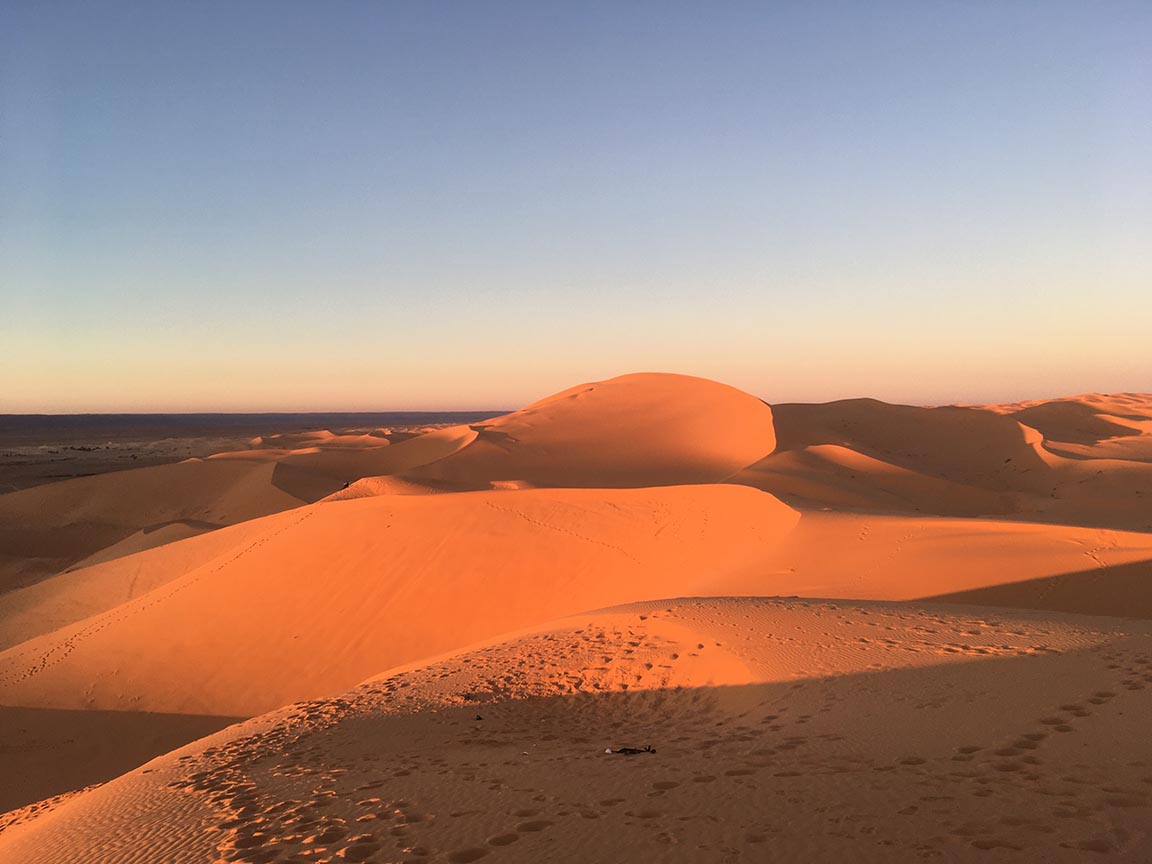 Not far out of town the paved road ends.  Conveniently, right there is a collection of 5,000 year old petroglyphs.  Back then, the climate was wetter and large animals such as giraffes and antelope were plentiful.

There's not much water these days. (I blame global warming.)  Here in Taghit an underground river rises to the surface and flows for about ten miles, giving life to the oasis. 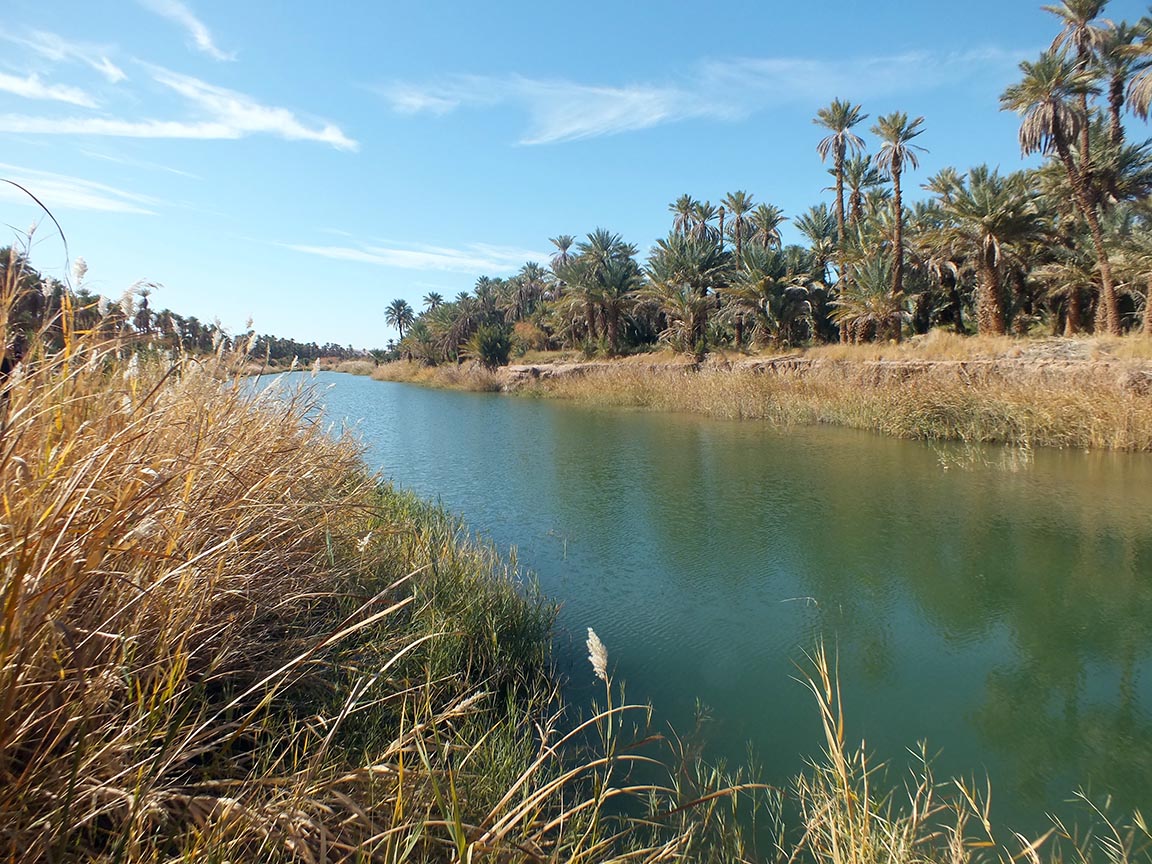 The almost fluid sand makes for an exhausting climb to the top of the dune for sunset.  The effort is not made any easier by the native cloak called a jebba that has transformed me into Obi Ron Kenobi.

From Taghit we drive to Timimoun, another oasis town.  The route is through “typical” Saharan landscape: rocks and gravel.  Alongside the road is an outcropping where fossils are readily visible – they appear to be some sort of lizard tails.

The town itself is noted for its red mud-brick architecture.

From Timimoun we fly to Oran, the country’s second city.

Our first day is not in Oran, but in Tlemcen, a hundred miles west and almost to Morocco.  It was from here that the Moors launched their successful conquest of Spain.  You’ve seen the Alhambra in Granada?  They've got almost the same thing here – the ruler’s palace was built ten years later in the same style. 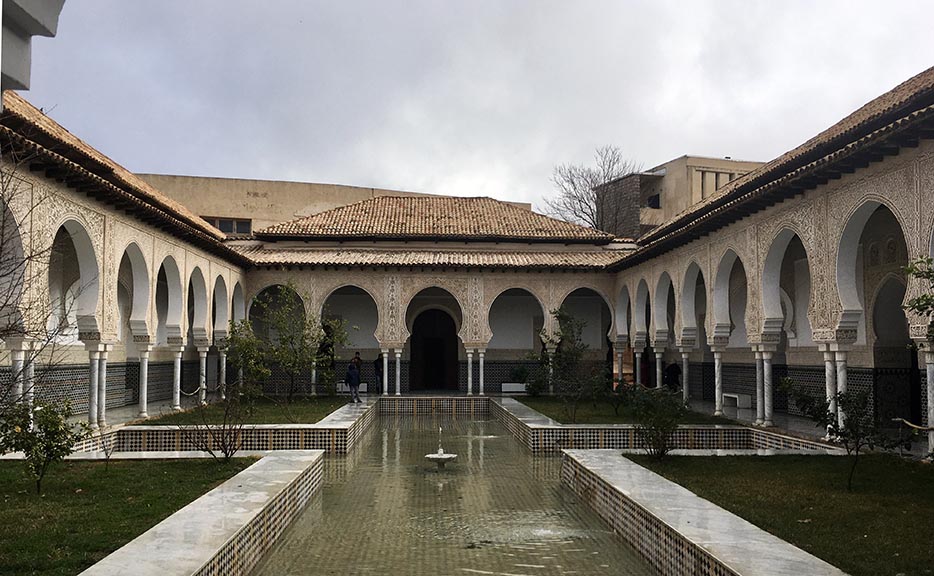 Around town there are several mosques in various states of decay and repair.

Just outside of the city is a vast cave complex.

The next day we return to Oran, where we spend our last day on a tour of the city.

The look is very French Mediterranean.

But if you walk a block or two away off the showcase streets, what you see is advanced decay, reminiscent of Havana.

The ruins of the Bey’s palace (a "Bey" was an Ottoman rank slightly lower than a "Dey").

Once the French (and the Jews) left, he main synagogue became a mosque and the cathedral a public library.

Atop a hill overlooking the port and providing a grand view of the city is the Fort of Santa Cruz.  After expelling the Moors, the Spanish continued their drive into Africa.  They held Oran for almost three centuries.

That's it.  End of tour.  North Africa completed.  Coming over took three days.  Going back, the flights mesh: Oran to Algiers to Madrid to Miami and then Jax all in the same (long) day.